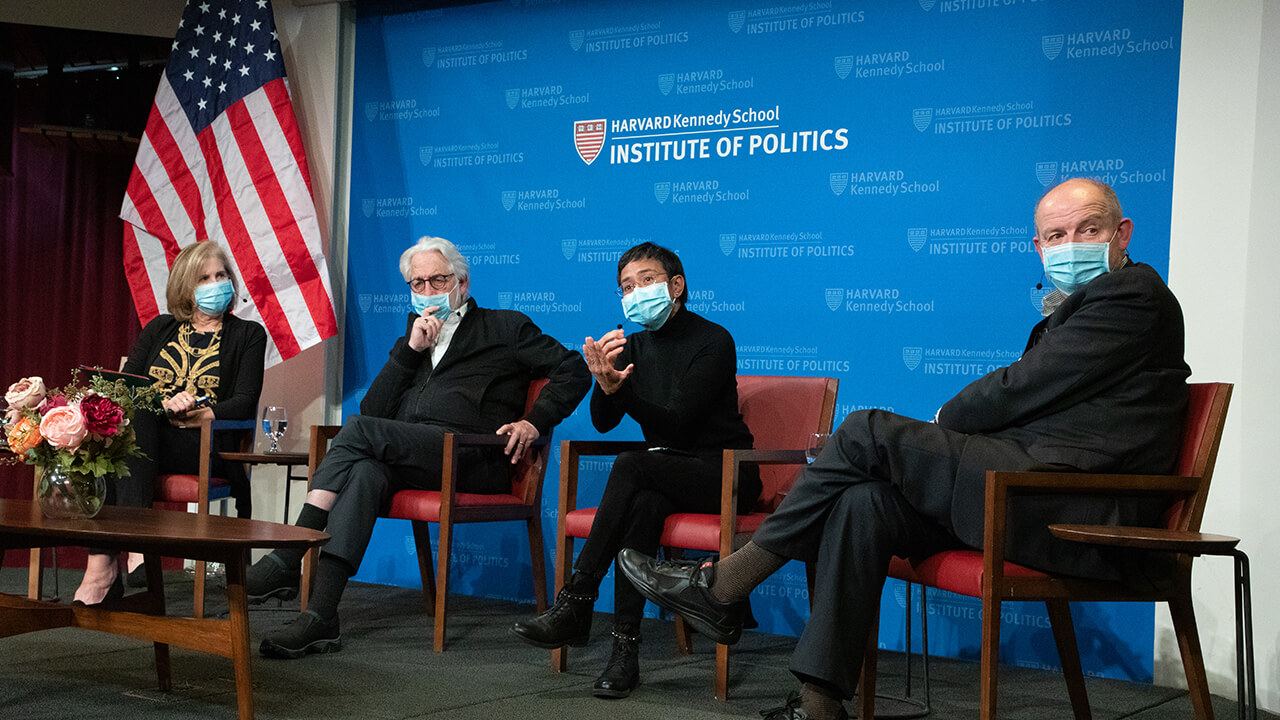 Blame the internet for challenges facing the news industry?

Nancy Gibbs and an expert panel says there is plenty blame to go around.

Navigating the news today is not just a challenge for the consumer, it is a potential minefield for news leaders. As former editor in chief of Time magazine Nancy Gibbs said, “Whether you’re looking at approval ratings or trust or the financial health of legacy media, the news is seldom good.” Gibbs, the director of the Shorenstein Center on Media, Politics and Public Policy and Edward R. Murrow Professor of the Practice of Press, Politics and Public Policy, moderated a discussion on digital journalism at the Institute of Politics John F. Kennedy Jr. Forum last week. The panelists brought deep experience in on-the-ground reporting, boardroom decision-making, online journalism, and the editorial muscle behind the news:

Gibbs asked each panelist for an opinion on what has happened to the news industry.  Forman argued that a decline in news quality resulted from a failure of imagination, a failure of innovation, even a failure of nerves, and that the news industry needs to take some responsibility for it. “Digital disruption has meant that we are in a battle for audience attention, and for many years, there was resistance on the part of news leadership to recognize that battle,” he said. “And I think we have to acknowledge in many news brands that the scramble to transform into digital media has taken too long, and has not focused on new audiences, and in the effort to acquire audiences, we have sometimes played to emotion and to entertainment.”

From a newspaper perspective, Thompson argued that a “slightly lazy industry” waited too long to adapt to what was happening. “The advertiser model was fabulously profitable in 1900, and a pretty good model in 2000,” he said. “Then digital arrives and it gives advertisers many more choices, similar to what happened when broadcasting arrived in the 1920s.” And the disruption changes consumers’ behavior. “When I think about advent of the big, digital platforms, the crime is not megalomania or greed or cynicism, or some strange, physical agenda,” he said.” “It's a kind of naivety.”

“Saying technology has caused the crisis is a little like blaming the internal combustion engine for the reason FedEx doesn’t operate the Pony Express.”

Ressa was reminded of 20th-century media theorist Marshall McLuhan’s words “the medium is the message” and noted that every medium has led to turmoil in the society it serves. “Technology is the reason I left traditional broadcasting with CNN,” she said. “I saw that a legacy news group just couldn’t cope, because a legacy news group has legacy systems, and it has a legacy culture. And those are the things that get in the way of the technology.” To prove her point that there is a shift in the form, but the substance stays the same, she opens her phone. “I can now go live to five million of Rappler’s followers on Facebook or Twitter. Standards and ethics and mission of journalism are there but the incentive schemes are not aligned with democracy or freedom of speech.” And while Ressa says the platforms will say it is a freedom of speech issue, she quotes actor Sacha Baron Cohen, “It’s not a freedom of speech issue, it’s a freedom of reach issue.”

Gingras agreed with Ressa, that the issue is not a question of what happened to the newspapers: “They were the internet of their communities until we had the internet itself.” By putting the internet in place, he said, free expression has been established like never before. “It is our first amendment come to its fullest flower, whether we're comfortable with that or not.” he said. “The internet also enabled open markets for information and publishing, the likes of which we've never seen before. The effects have been both wonderful, and at the same time, challenging.”

Thompson pushed back at Gingras and his defense of digital platforms. “Google, Facebook, and the others are responsible for spreading an awful lot of misinformation around the world,” he said. “And if you say, well, that’s an inevitable byproduct of all the good things that are happening with the internet, and we will get around to solving this problem as well, I’m not sure that the net of this is necessarily positive.”

Gingras believes that the challenge to address the lies and mistrust without completely thwarting free expression is a circular one. “We have to address it at every dimension of the circle and recognize these challenges of misinformation are coming from our leaders,” he said. Forman agreed that the crisis in news today can’t fall completely at the feet of technology. “Saying technology has caused the crisis is a little like blaming the internal combustion engine for the reason FedEx doesn’t operate the Pony Express. Technology is not the sort of thing that is going to stop because it challenged a business model,” he said.

In the end, all agreed that news and the business of information will continue along a bumpy road. Large organizations will survive by using technology—the New York Times just announced nearly eight million digital subscribers—while platforms like Google will provide access to quality journalism for free. Gingras added that internet regulation needs to be present but thoughtful. “Let’s maintain the principles of the open web; let’s maintain principles of freedom of the press,” he said. “I have no question in my mind about us being able to find, as an industry, durable paths for independent journalism going forward. I think we do have to acknowledge some key facts and be careful about memes.”