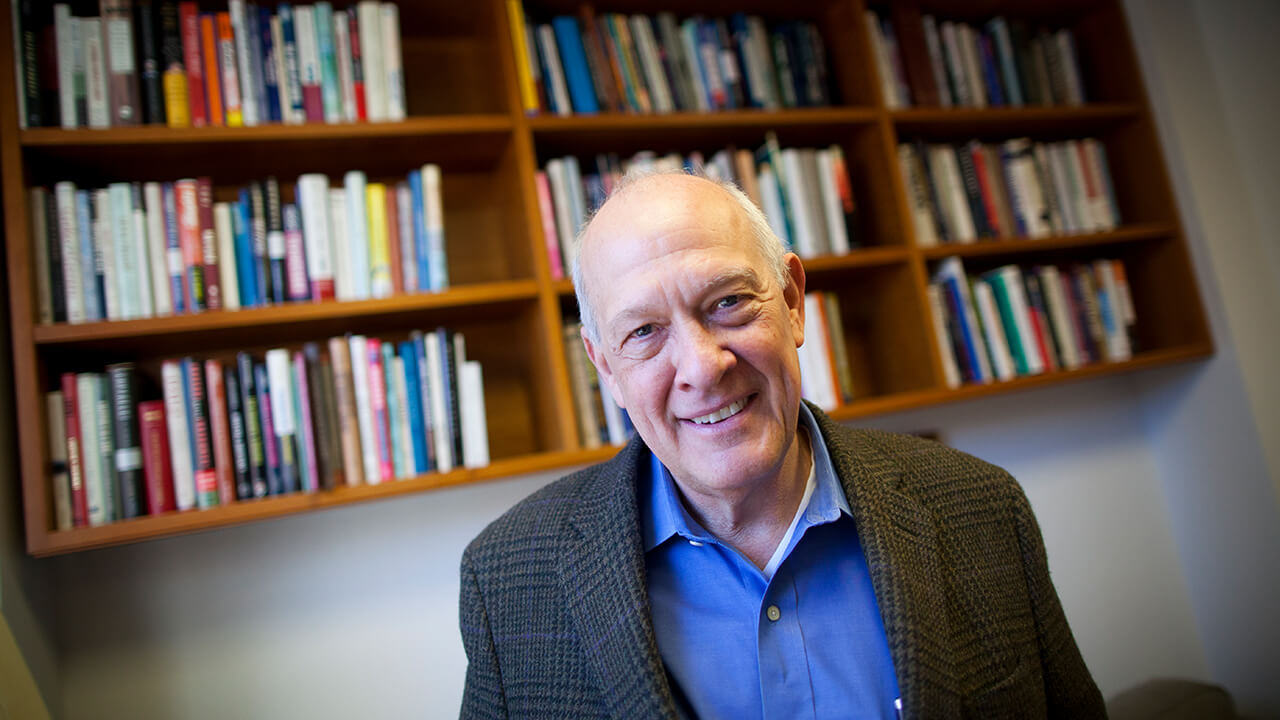 Funding HKS’s work on the media, politics, and public policy

ALEX S. JONES, the Pulitzer Prize–winning journalist and former director of HKS’s Shorenstein Center on Media, Politics and Public Policy, says journalism is experiencing a crisis of credibility that has serious consequences for democracy. This belief, along with his abiding trust in the Shorenstein Center’s mission, is why he decided to donate $1 million to the center.

The Shorenstein Center’s teaching and research cover everything from digital platforms and democracy to news sustainability to technology and social change. The center is supported by generous donors—including the Shorenstein family, who made the founding gift and named the center in memory of their daughter, Joan, a producer at CBS Evening News who died of cancer in 1985.

Jones says the center’s work is vital to democracy. “The power of the Shorenstein Center to convene the various parties of interest in the dilemma we’re in as a nation and the world is critical,” he says. “The essential fuel for a successful and enduring democracy is an informed public, and the news media has been the main part of that. What’s invaluable to democracy is that institutions are looked at as sources of reliable truth. Even the people most critical of the media don’t want the watchdog role to go away—but to be a watchdog, you have to be able to be believed.”

He should know. Jones has spent the better part of his life immersed in the news business. His grandmother acquired the local Greeneville, Tennessee, newspaper in 1916, and his father served as its publisher. Continuing in the family business, Jones became a journalist, eventually spending nine years reporting on the media for the New York Times and writing several award-winning books. His most recent work, Losing the News: The Future of the News that Feeds Democracy, was published in 2009 by Oxford University Press. In it, he presciently wrote:

Until now, the iron core of news has been somewhat sheltered by an economic model that was able to provide extra resources beyond what readers—and advertisers—would financially support. … In the media economy of the future, cold metrics will largely determine what is spent on news. …  Demand will rule, and that may well mean that, as a nation, we will be losing a lot of news. There will be a bounty of talk—the news of assertion—but serious news, reported by professional journalists, is running scared.

More than a decade later, Jones’s words ring even truer because of the effect of social media platforms like Facebook, of which he wryly observes, “Facebook was created right across the street from the Kennedy School. There’s a certain irony that [Facebook creator Mark] Zuckerberg was in one of the dorms at Harvard making Facebook happen when I was director of the Shorenstein Center.”

“Even the people most critical of the media don’t want the watchdog role to go away—but to be a watchdog, you have to be able to be believed.”

A current member of the center’s advisory board, Jones decided that his donation should not be restricted to a particular purpose or program but should be used where it is most needed. “I thought the funding could be used best for the things that come up without being expected,” he says, “like the research that needs to be done quickly that you don’t necessarily have the time to raise the funding for.”

Journalists have an especially difficult time doing their jobs in today’s divisive environment, Jones says: “We’ve lost the confidence of many Americans because of the political climate we’re in and the ability of people who manipulate things to tell lies and be believed. This is very damaging to democracy. I hope that the Shorenstein Center can help restore the idea that there’s something like reliable information.”

Journalism’s role in buttressing democracy is a topic of great interest to researchers at the Shorenstein Center. Led by Nancy Gibbs, Edward R. Murrow Professor of the Practice of Press, Politics and Public Policy, the center bridges the gap between journalists and scholars and between them and the public—a gap that seems to be growing into a rift, with an October Gallup poll revealing that only 36% of Americans have a “great deal” or a “fair amount” of trust in mass media.

Gibbs says that Jones understands the need to adapt the work of the Shorenstein Center to meet today’s challenges: “We need to be deliberate and agile at the same time. Alex’s gift is a measure of his deep commitment to the mission of this center and his acute understanding of what success and impact require. I could not be more grateful for his counsel, his kindness, and his generosity as we press forward with our work.”

Through his generosity, Jones has demonstrated his commitment to the Shorenstein Center’s mission—and his input as a former director of the center and a current board member has been invaluable to Gibbs. “I’ve known and admired Alex for many years,” she says, “and every time I step foot in the doors of Shorenstein I’m reminded of the impact of his leadership here. As an advisory board member, he has been a kind of North Star, keeping us focused on the values that matter most even as the information environment changes dramatically.”

Thanks to Jones, the Shorenstein family, and many others, HKS can continue to contribute solutions to the numerous issues confronting the news business today.