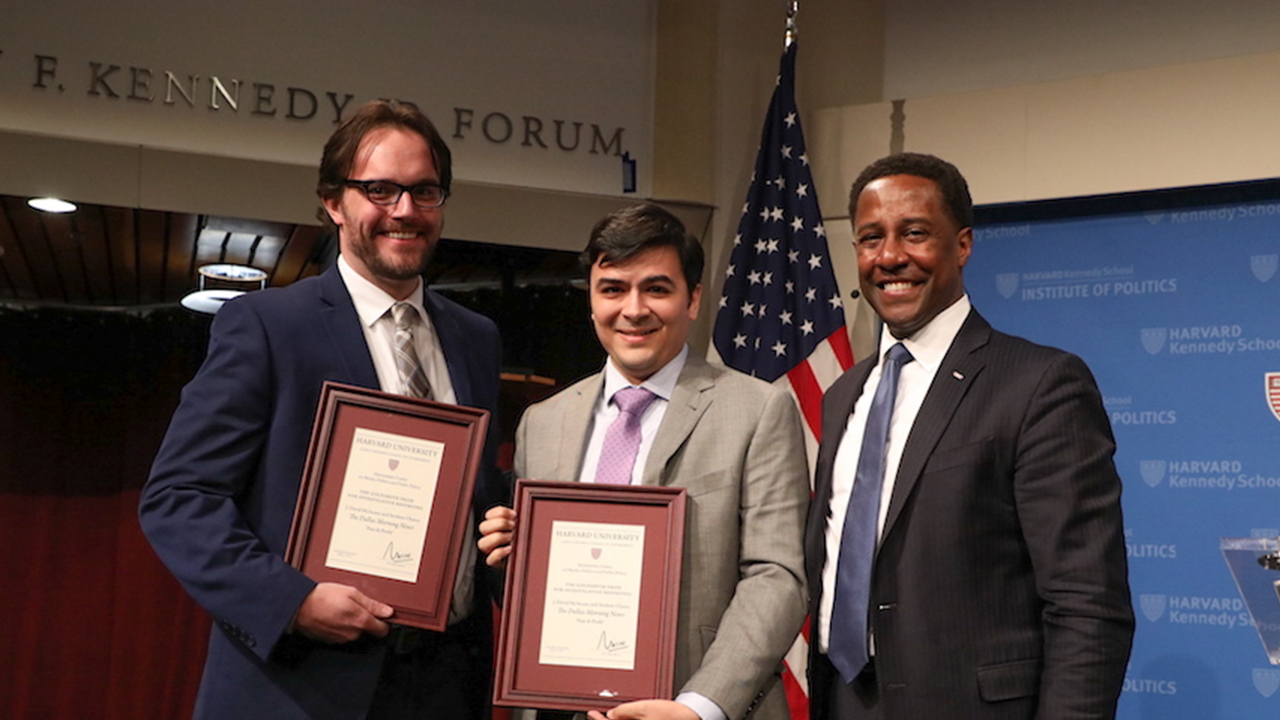 The Goldsmith Award finalists talk about the state of investigative journalism

Reporters and editors share thoughts on the role of journalism in democracy today and the future of the craft.

In what became known as the Pentagon Papers case, the U.S. government sued The New York Times and The Washington Post in 1971 to block publication of a classified Defense Department study of American involvement in Vietnam. In the subsequent Supreme Court’s 6-3 decision in favor of press freedom, Justice Hugo Black wrote, “Only a free and unrestrained press can effectively expose deception in government.” Since that time, American investigative journalism had its heyday starting with the Watergate scandal, but has suffered in recent years as the declining fiscal fortunes of the news industry have resulted in cuts, downsizing, and the closure of some news outlets.

This week, the Goldsmith Prize, awarded by the Kennedy School’s Shorenstein Center on Media, Politics and Public Policy, honored the best in current American investigative journalism. A team from The Dallas Morning News won the top prize for its reporting on how Medicaid patients in Texas could not receive adequate care, and Washington Post Editor Marty Baron received a special lifetime achievement award. We asked the Goldsmith finalists, who work for both nonprofit and for-profit news organizations, about the current state of investigative reporting and its role in governing and democracy.

Q: What is the role of investigative journalism in American democracy?

J. David McSwane, Investigative Reporter, Dallas Morning News
I believe investigative journalism is a crucial check on power, especially during an era in which truth is wielded only when it is advantageous to the powerful yet ignored, with less and less political consequence, when it is inconvenient to a particular agenda or idea. It is perhaps the only adversarial force that doesn't oscillate, going on the attack when one party is in power and relenting when another takes over. At its best, investigative reporting serves the public in policing the integrity of our discourse and exposing truth where it is hidden. This is true at all levels of our democracy, from the local school board to the state house to the presidency.

Christian Sheckler, Reporter, South Bend Tribune
I think one important role of investigative journalism is simply to arm decision makers (including voters) with information that otherwise would have remained hidden, allowing them to use the new information to weigh decisions. In the case of our Elkhart stories, the city's police chief was making problematic disciplinary decisions and, we found, providing inaccurate or incomplete information to the city's elected and appointed civilian leaders (the mayor and the police oversight board). When we began to reveal how the chief was handling these cases, starting with the beating of a handcuffed man in detention, there was a swift reaction from the public, and public officials responded with action. In Elkhart, that included the chief's suspension and subsequent resignation, as well as an independent review of the police department.

Michael Siconolfi, Investigations Editor, Wall Street Journal
Investigative journalism practiced by experienced reporters has never been more important to American democracy than now. Its role these days is to pierce through extreme partisanship and a lack of transparency in government and lobbying to get at the truth in a balanced and unbiased way. This is a particular challenge in an era of alleged “fake news” and sparsely sourced media posts. One of the most effective ways to do this is for the reporting to be precise and unimpeachable, and written in a way that is fair and avoids hyperbolic language.

Wendy Ruderman, Reporter, Philadelphia Inquirer
In many ways, the fundamental role of investigative journalism remains unchanged: Hold the powerful to account and uncover wrongdoing that would otherwise go unchecked. Our mission is to serve as public watchdogs and elevate the voices, often poor and disenfranchised, of those who have no true outlet to be heard. In a time when anyone with a social media account can spread conspiracy theories and political propaganda disguised as news, true investigative journalism must continue to be better at delivering investigations built on sound, undeniable facts. And while it’s always been important for journalists to be transparent about their sources and the reporting process, today’s technology has afforded us a unique opportunity to be even more transparent.  We can — and should when possible — publish or post documents, records, transcripts, letters, emails, recordings, and reports that we have obtained through our investigation. We can pull the curtain back to reveal how and why we arrived at our findings.

Q: What responses do you get to your investigative reporting?

Michael Grabell, Reporter, ProPublica
After one story, my phone was jammed day and night with vulgar calls from people upset that we’d given attention to undocumented immigrants who’d been arrested and deported after being injured on the job. One caller demanded to know why he should feel sympathy for the workers. Writing about immigration has always drawn this kind of response. I think a lot of it is generated by misunderstandings about the law and assumptions about immigrants, which have only been amplified in recent years. But if you look back in history, nearly every new immigrant group faced this kind of vitriol. As a journalist, you just pick up your notebook the next day and keep reporting what’s happening, whether people like to hear it or not.

Rebecca Davis O’Brien, Reporter, Wall Street Journal
Critics across the political spectrum have criticized our work, often seeing it as necessarily imbued with or biased by politics. The Wall Street Journal's coverage of (President Donald) Trump, Michael Cohen, and those in the President's orbit often elicits angry reader responses: comments and emails alleging criminality by Hillary Clinton; phone calls announcing subscription cancellations; emails to female reporters with misogynistic overtones or outright slurs. Gentler responses often include questions about why on earth we are spending (wasting) our time "digging up dirt" on the president, or accuse us of laying out allegations without explaining why they're important. Liberal critics of our coverage point to the paper's ownership, its conservative editorial board, its ties to Fox News—they say we are being too soft on the president, or discount (or fail to credit) our coverage.

Michael Rothfeld, Investigative Reporter, Wall Street Journal
In addition to the partisan reactions on both sides that Rebecca has pointed out, we have also received thanks for bringing to light the actions by the president’s associates that might otherwise have remained in the dark. Our coverage revealing the Stormy Daniels hush money agreement and chronicling its aftermath has been some of the most popular content since the beginning of 2018, and has also resulted in new subscriptions, besides those that might have been cancelled. So while there are certainly those who attack, it is gratifying to know that there are also still many people out there who appreciate investigative journalism and the impact it can have.

Q: Given the financial difficulties that the news industry is facing, how do you see the future of investigative journalism?

Michael Grabell, Reporter, ProPublica
The advertising model that historically supported journalism is no longer there, and no area has suffered more than local investigative journalism. Going forward, I think we’re going to see more nonprofit experiments as readers, viewers and listeners realize that investigative journalism serves a public good that’s as essential for a thriving community as the arts. Poetry, art, and theater have long relied on donors who support the general civic good that the arts provide, without steering the content of an individual play or a poem. I think people are starting to view investigative journalism in a similar way. Some examples of these new models include ProPublica’s Local Reporting Network, which has a Goldsmith finalist in its first year, the education site Chalkbeat, and the Report for America initiative that places promising young journalists in local newsrooms.

Mike Siconolfi, Investigations Editor, Wall Street Journal
We have to continue to adapt to the ways young people consume their media. This means some investigative pieces can be short videos, graphics, or even pieces that include virtual reality or other ways to bring readers into the stories. We also have to be particularly  judicious in long projects that run many thousands of words that are aimed more at other journalists, and less on readers who have less time than ever. It’s also important to focus on rapid-response investigations off the news to ensure it’s both timely and effective in a fast-paced world where the hottest stories change from week to week.

Wendy Ruderman, Reporter, Philadelphia Daily News
Investigative journalism is both time-intensive and resource-driven. We’re fortunate at the Inquirer to have the nonprofit Lenfest Institute, which owns us and financially supports investigative journalism. In fact, the investigative team at the Inquirer mushroomed last year from six to 12 members. The institute awarded us a $9,000 grant to pay for environmental testing in the city’s district schools for our “Toxic City” project. Lenfest also awards grants to other media outlets across the country. For the “Toxic City” project, we also received a grant from the University of Southern California Center for Health Journalism and the Dennis A. Hunt Fund for Health Journalism. The model to keep investigative reporting strong includes grant funding, collaboration between different media outlets, and support from nonprofits and the public.