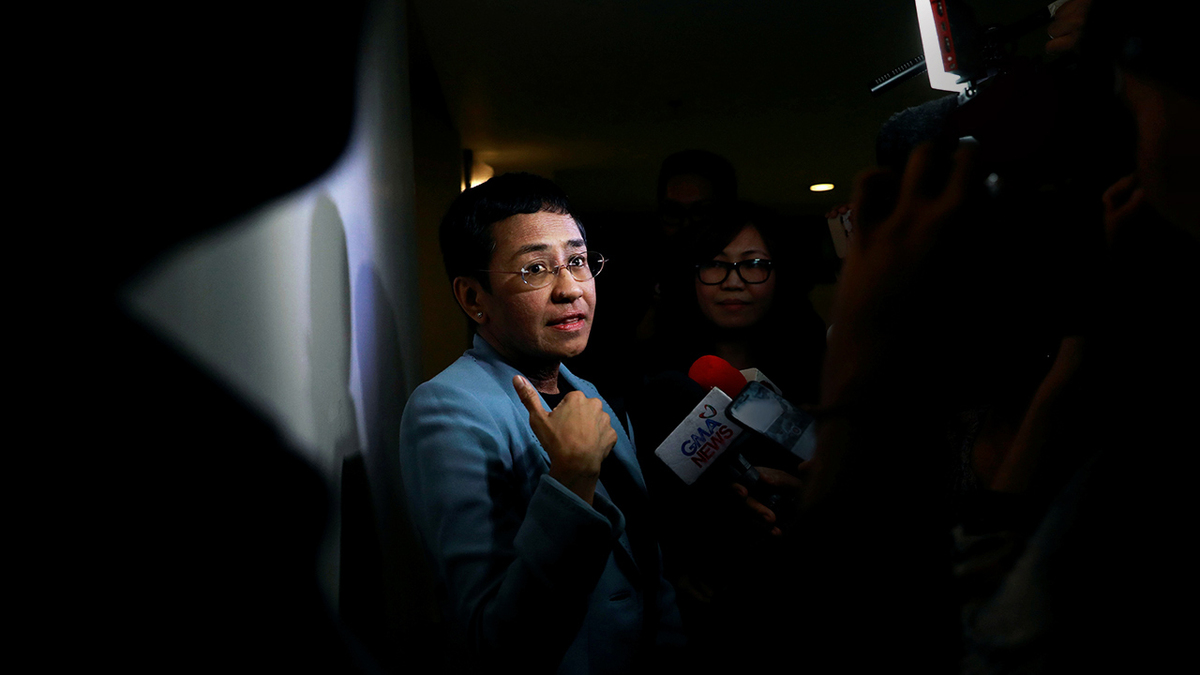 Nobel Peace Prize winner Maria Ressa on journalism, democracy, and the fight for the truth

Ressa, a Harvard Kennedy School fellow, talks about the new rules of journalism, facing decades in prison, the meaning of the Nobel Peace Prize for reporters, and what she hopes to learn from Harvard students. 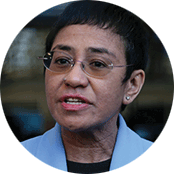 Maria Ressa learned that she had won the 2021 Nobel Peace Prize as the newsroom at Rappler, the Filipino digital news organization she founded and has led since 2012, busied itself reporting on the last day of candidates filing for the Philippines’ upcoming presidential elections. The timing was fitting. Rappler is devoted to aggressive reporting on the administration of President Rodrigo Duterte, who cannot run again, and documenting extensive corruption and extrajudicial killings. While Ressa and Rappler have gained international recognition for their work (before the Nobel announcement she had been Time’s Person of the Year in 2018), they’ve also suffered. Duterte has lashed out repeatedly, Ressa and the news organization face a slew of serious criminal charges, she is appealing a conviction on a “cyber libel” charge, and they also face near constant online attacks. Ressa, who grew up in New Jersey and graduated from Princeton, is a Hauser Leader at the Center for Public Leadership and a Joan Shorenstein Fellow at the Shorenstein Center on Media, Politics and Public Policy. We caught up with her to ask her about her work, her reaction to the Nobel Prize (which she shared with Russian journalist Dmitry Muratov), and plans for her visit to Harvard in November. The interview has been edited for length and clarity.

Q: Can you tell us a little bit what your life has been like since you won the prize on Friday?

Oh my gosh. I always thought I was busy. I didn't realize how much busier it could get until now. It's been a roller coaster of emotions, and sometimes the emotions catch you at the weirdest times. I'm still adjusting to it. I'm still stunned. I think that I'm a little bit deluged but, at the same time we feel the love. For me, for Rappler, for journalists in the Philippines and for journalists, I think, everywhere around the world. Because … what we've been fighting is the battle for facts. And all of a sudden, the Nobel committee validated that this is the battle we need to fight.

I went back over the last time a journalist received the peace prize. That was about 85, 86 years ago, and he languished in a Nazi concentration camp. [Editor’s Notes: German journalist Carl von Ossietzky received the Nobel Peace Prize in 1935 for helping to expose German militarization. He died in 1938.]

I always use this analogy of how an atom bomb exploded in our information ecosystem. And just like after World War 2, the world came together to prevent the worst of humanity from killing the best. They created the U.N. and the Universal Declaration of Human Rights. I feel like that's that kind of moment. And this feels like a global validation that we need the focus on this.

Q: What would you expect, and what do you hope, will be the effect of this prize on your work as a journalist?

In the Philippines, it did two things almost simultaneously. We've been a very divided society. So, it almost felt like we came together—journalists as a group, Filipinos as a group. That it's right-side up for a second. That's the immediate feeling. And then the attacks began again, two or three days later; it took the presidential palace until Monday to respond, and it was double-edged, as it has been. So, we keep doing our jobs, but it was like a glow happened. And I hope that that kind of energy, that kind of hope, takes us forward.

Q: You're facing a barrage of legal cases. Do you think this will offer you any protection? Will the gaze of the world on you help you in any way?

I think it's been our protection. One of the things I've learned in the last five years is that the only way a journalist defends himself or herself is by shining the light. You’ve got to keep doing the story. You have to keep speaking. And over the last few years, I grappled with that because when the Time Person of the Year happened I felt that I would then be more targeted. And yet what wound up happening was it formed a shield over me and Rappler and that was incredible. That means that it was harder for the government to do certain things. And I believe that's what will happen here. But again, who knows? And this was something I was just telling [Rappler managers] today: the last journalist who got this, languished in a concentration camp, so does this mean it's going to get better or it's going to get worse? We don't know. So, we're going to keep doing our best to do our jobs. But I think it just got a little bit easier.

Ten arrest warrants were filed against me in less than two years—me and Rappler. In the last three months, two of the cases have been dropped, and two cases have been consolidated, so there are seven remaining cases. Cumulatively, that means I could go to jail for the rest of my life. I really don't talk about it that much. But that's the Damocles sword hanging over me. And that's part of the reason why this time I have skin in the game. There are certain things I can't say but I still believe. I know that I will fight these cases in court, and the extra attention will mean that a decision cannot be made in darkness. And that's all I can do.

“One of the things I've learned in the last five years is that the only way a journalist defends himself or herself is by shining the light.”

Q: What do you hope to do with the time you'll spend here at Harvard Kennedy School and what the fellowships mean to you?

You have so many great minds there. [Retired Harvard Business School Professor] Shoshana Zuboff, she'll be there around the same time. There are lots of other people I want to meet. And then the second part is … I want to get a sense the students. And then the biggest questions I have are around leadership. Then there's the media part, through the Shorenstein Center: media manipulation, the disinformation, the fact that this is eroding the fabric of society and changing our humanity. I think it's big. I want to discuss it like we used to over late night chats and pizzas. And then the students, I want to see where they are. What are their values? How are future leaders being developed? What are they thinking? Especially in a time when social media has changed the way they communicate.

I know what it's done for journalism. I think that these platforms have atomized meaning and that's tough for journalists. We just spent eight months on one story. It was exposing corruption. And yet that one story will be gauged by page views, which is the metric of the internet. When you devalue that kind of work, then you are creating an incentive scheme, that actually weakens journalism and weakens democracy. So that also creates a different leader, populist us-against-them kinds of leaders. So, I think the incentive structures are off. I want to see how Harvard students are reacting to this and how the Harvard community is grappling with that change. 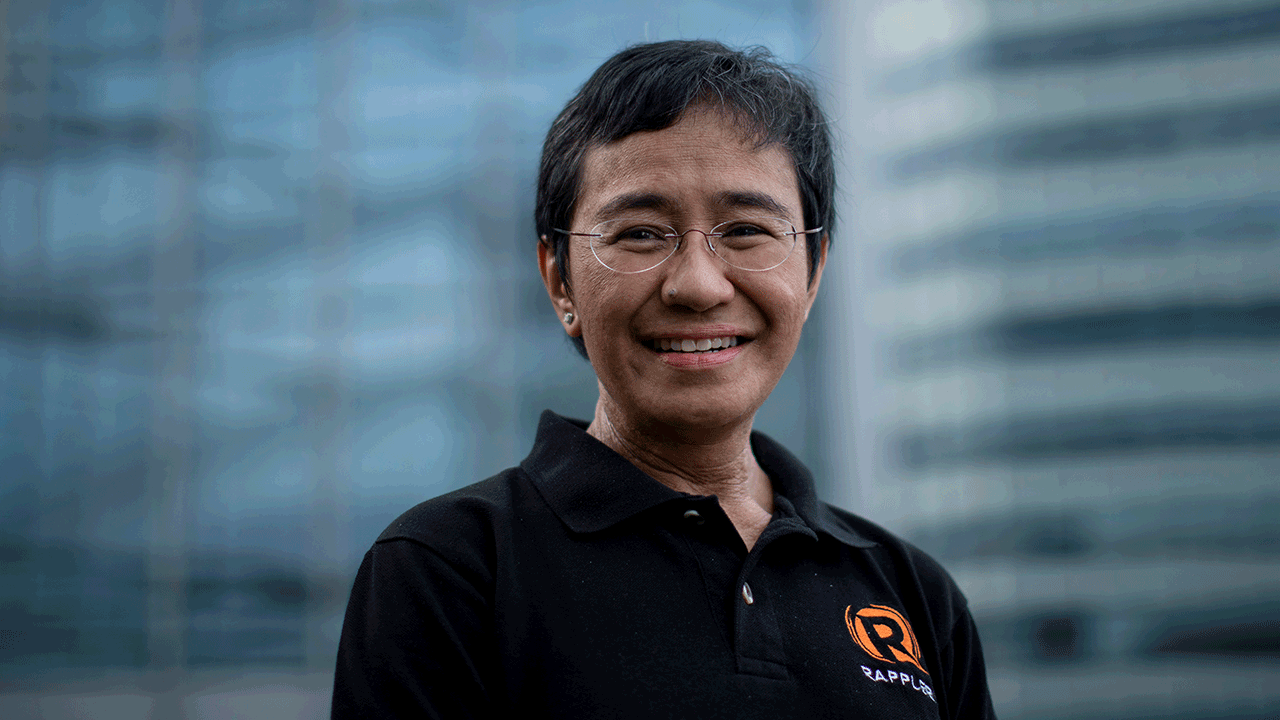 Q: You speak about rewriting the rules of journalism. Do you know what those new rules are?

Yes. And part of it is because I have a front -row seat. It's just the most amazing thing about Rappler. We built it in 2012 and it has three pillars of tech, journalism, and community.

On tech, everything was going fine up until I think the social media platforms got too greedy—the surveillance capitalism model. I am part of the Forum on Information and Democracy. And we came out with a working paper that came out with systemic solutions to this. Because when you think about it as a content moderation problem, you miss the whole point, which is, this is algorithmic distribution. That's where the insidious manipulation happens. It's the micro-targeting. So we came up with a dozen systemic solutions and more than 250 tactical steps that the platforms and that we could take.

[Rappler is also] building our own tech platform. Because you need to have a space for fact-based, evidence-based reasoning. … And there's no way that we can be a Facebook or a YouTube, but we can certainly, with our community, create a place where we can do that. This is rolling out by the end of October, early November.

The second part is, we need to help independent media survive this time period, as we're fixing the tech. How do we win the business model that's crumbled? Advertising is dead. It's moved to the platforms, the ones that are being used to attack us and break down trust. At the end of September, I agreed to co-chair the International Fund for Public Interest Media, with the former CEO of the New York Times, with Mark Thompson. And what we want to do is to find new money. Right now, as it stands, 0.3% of overseas development assistance (ODA) globally, goes to media. And now the Nobel committee just spotlighted, how important a role journalists play. That's actually fantastic. What we want to do is to take that 0.3% and take it up to 1%. If we can do that, we can raise a billion dollars a year. And a lot of that will be going to countries like ours, countries in the global south, where institutions are weak and it's extremely dangerous to be a journalist speaking truth to power.

And then finally, the last part is community. For me, part of the reason that Rappler survived the onslaught is because we have a community that came together around us. And the way I think about it is, the elevator pitch of Rappler when I was raising money in 2011, is that we build communities of action. And the food we feed our communities is journalism because civil society moves based on facts. And then it pushes for the change in the real world. What the social media platforms have done is, the disruption is actually in that process of taking the facts and turning them into real -world action. So that's one of the things we're trying to do, is to catch up civil society. We have a civics engagement arm called MovePH. And especially with our elections coming up in May 2022, our civic engagement arm is building communities of actions, that will protect the facts, human rights groups. MovePH is focused on getting people registered to vote and getting them out to the polls.

Q: Will you be able to attend the award ceremony in Oslo?

I don't know. I hope so. I will put in for court approval. So, the way it works is, every judge who owns one of my charges has to give approval to travel. And I've not had any problems since this started happening to me. I've gotten 36 separate approvals and I have come home every time, even if I know an arrest warrant is waiting for me. And there is a point where I just kind of begin to laugh about it. It's crazy. But I'm putting in for court approval. I've been denied four times by one court. So even if I get approval from nine, if I'm denied by one, I don't leave. … I'm fighting for my rights.

We have seen the consequences of disinformation. Are we ready to address it?