Family past as political prologue

Assistant Professor Benjamin Schneer's research shows a complex correlation between how members of Congress vote on immigration bills and their family history.

Passionate about immigration reform, President John F. Kennedy was fond of calling America “a nation of immigrants.” The phrase became the title of his posthumously published book on the subject and reflects the fundamental reality that—except for indigenous people—the families of all Americans originated from somewhere else.

Yet the current political tensions over immigration also show the enduring power of America’s nativist streak. It’s the tendency of some people, even relatively recent immigrants, to want to “pull the ladder up” behind them, says Harvard Kennedy School Assistant Professor of Public Policy Benjamin Schneer. To gain new insight into the politics of immigration reform in Congress, Schneer studied what effect lawmakers’ immigrant family backgrounds had on their legislative behavior.

The research, described in a paper titled “‘Descended from Immigrants and Revolutionists’: How Family Immigration History Shapes Representation in Congress,” found that family background—particularly how recently a legislator’s family had immigrated to America—had a measurable effect on rhetoric about immigration and voting patterns on landmark immigration legislation.

“We initially wanted to study the question of: ‘Can you explain policy change in Congress through looking at this variable of distance back to immigration?’” says Schneer, who authored the study with two Boston University assistant professors, James Feigenbaum and Maxwell Palmer. “And ultimately what the answer we came to was that it was not pivotal for explaining policy change, but that it mattered a surprising amount for the legislative behavior of individual members of Congress.” 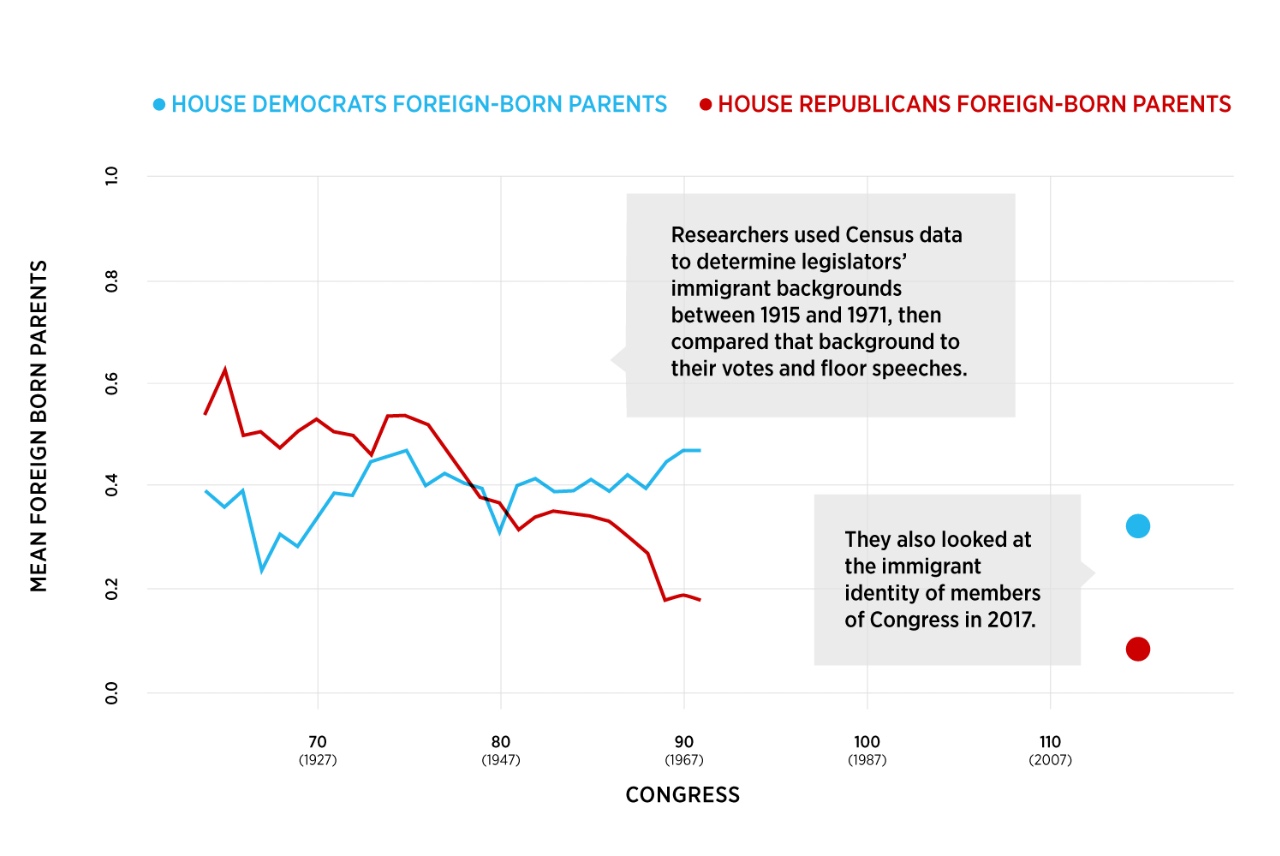 “Yes, there is this relationship between the generational distance you have from immigration and if you voted for a more permissive or more restrictive immigration policy on various key immigration votes,” Schneer says of the research. “What it does do is explain individual decision making of members of Congress pretty well.”

However, the study found other factors also affect how members of Congress vote on and talk about immigration. Those factors include the number of recent immigrants they represent in their district, and what regions of the world their own families emigrated from. In addition, the researchers found that not only lawmakers’ family immigration history, but also the extent that they were publicly perceived as recent immigrants, affected their behavior.

When the researchers looked at which lawmakers talked more frequently and publicly about the subject, personal family immigration history seemed to matter less than the makeup of the district they represented—in contrast to the findings on vote choice. Regardless of their own background, lawmakers seemed to take their cue from constituents when deciding whether to make immigration reform a top talking point. "In casting a really tough vote, maybe even one that might go against the interests of some folks in your district, it seemed to help if you have an immigrant background to do that," Schneer says.

Another interesting finding was the relationship between perceptions of immigrant background. The researchers studied lawmakers with surnames that suggested that they were immigrants (based on census records) and found that it mattered as much as actual family history.

Additionally, the research found that, under some conditions, support of permissive immigration based on common immigrant identity could break down. When restrictive legislation targeted specific regions, such as Southern or Eastern Europe, lawmakers who did not have familial origins in the targeted regions were less likely to respond by supporting more permissive legislation.

In terms of the history of American attitudes toward immigration, Schneer said the pendulum has swung back and forth significantly over time, and that it is difficult to categorize immigration policy coming out of Congress in a linear fashion.

The current, relatively polarized legislative environment he said, aligns with “a drop in the Republican Party in terms of people who are foreign-born themselves or who have foreign-born parents” while percentages within the Democratic Party have remained relatively constant, he says.

The political legacy of American slavery