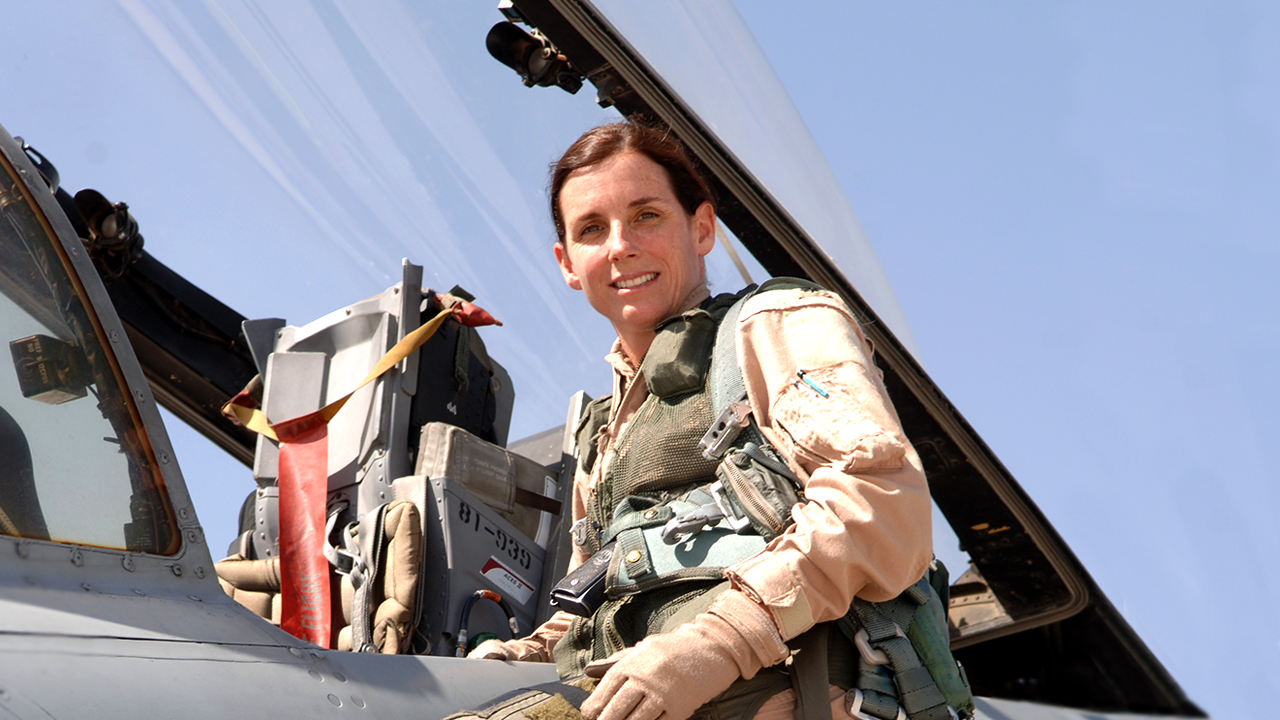 She was the first U.S. female pilot to fly in combat. She sued the Pentagon. She taught national security studies. Then Congresswoman Martha McSally felt compelled to run for office.

MARTHA McSALLY MPP 1990 was working in Europe when she learned that a special election had been called in her home district when Gabrielle Giffords resigned from her congressional seat a year after an attempt on her life. The announcement came on a Sunday evening. By Thursday, McSally, a former Air Force pilot, had made calls back home to begin lining up support and was buying a plane ticket to the United States to see whether she was electable and could organize quickly enough in the 90 days before the election. Most important, she wanted to understand whether she felt called to run for office.

A few days later, McSally woke up early in her hometown of Tucson, Arizona, and in the predawn light contemplated her sense that she could help make a difference and that she could not simply stand there and criticize what she saw as the country’s problems without trying to fix them. By 6 a.m., before she’d even had her first meeting to discuss the plausibility of a run, she had written her boss at the George C. Marshall Center in Germany, where she was a national security professor, to tender her resignation. She had made her decision: She was going to run. McSally would lose that first election in the primaries, run again, and win the district by a mere 167 votes two years later in 2014.

It was perhaps a neat summing up of a complicated character: purpose-driven, unable to resist forward progress, and with a defiant streak a mile wide.

“I’m not an impulsive person, but I am a person of conviction,” McSally says. “When I feel something brewing in my gut, in my spirit...oftentimes I can’t turn it off, and then I have to act on it.”

It’s what drove McSally, a retired Air Force colonel, to become the first U.S. female pilot to fly in combat. It’s what drove her on a years-long effort to force the Pentagon to change a policy governing the behavior of female service members abroad. And it’s what drove her, despite an aversion to politics, to jump into the arena and try to effect change.

In one of their last conversations before he passed away, McSally says, her father told her to make him proud. He had risen from humble circumstances to go to college and become a lawyer and a civic leader in Warwick, Rhode Island. She strove and excelled at everything she did, driven by an urge to make the most of it.

“I was propelled on the trajectory of making my father proud but also of carrying on his legacy in his absence,” she says. “But I learned at a young age that every day is a gift, and you should make the most of it and do something with your life.”

So McSally enrolled in the U.S. Air Force Academy, intent on studying medicine. Flying wasn’t in her plans—until she was told she could not do it, and then it became an obsession. “It’s so deeply infuriating to me when somebody says a girl can’t do it,” she says. She attended the Kennedy School to follow her other growing obsession: policy. Her time at the school gave her entrée into the world of national security just as the Cold War was coming to its dramatic end and a new age of security threats was beginning. Her PAE had her studying the future shape of NATO, and her work even made it into President George H. W. Bush’s State of the Union address. (“Second lieutenant,” she remembers an officer jokingly telling her at the time. “It’s all downhill from here.”) Her two years in Cambridge proved serendipitous in other ways, as well, allowing her to enroll in flight school just as the restrictions on female combat pilots were lifted.

She picked the A-10 Thunderbolt, also known as the Warthog, a tough, unglamorous workhorse of a fighter originally designed to combat Soviet tanks and for close air support of ground troops. In 1995, deployed to the Middle East in support of Operation Southern Watch, which patrolled the skies over Iraq after the end of the First Gulf War, she flew the first combat mission ever by an American female pilot. It’s a first of which she is proud, but which she recognizes was in part a question of luck and timing and in part the fruit of efforts by generations of female pilots before her. 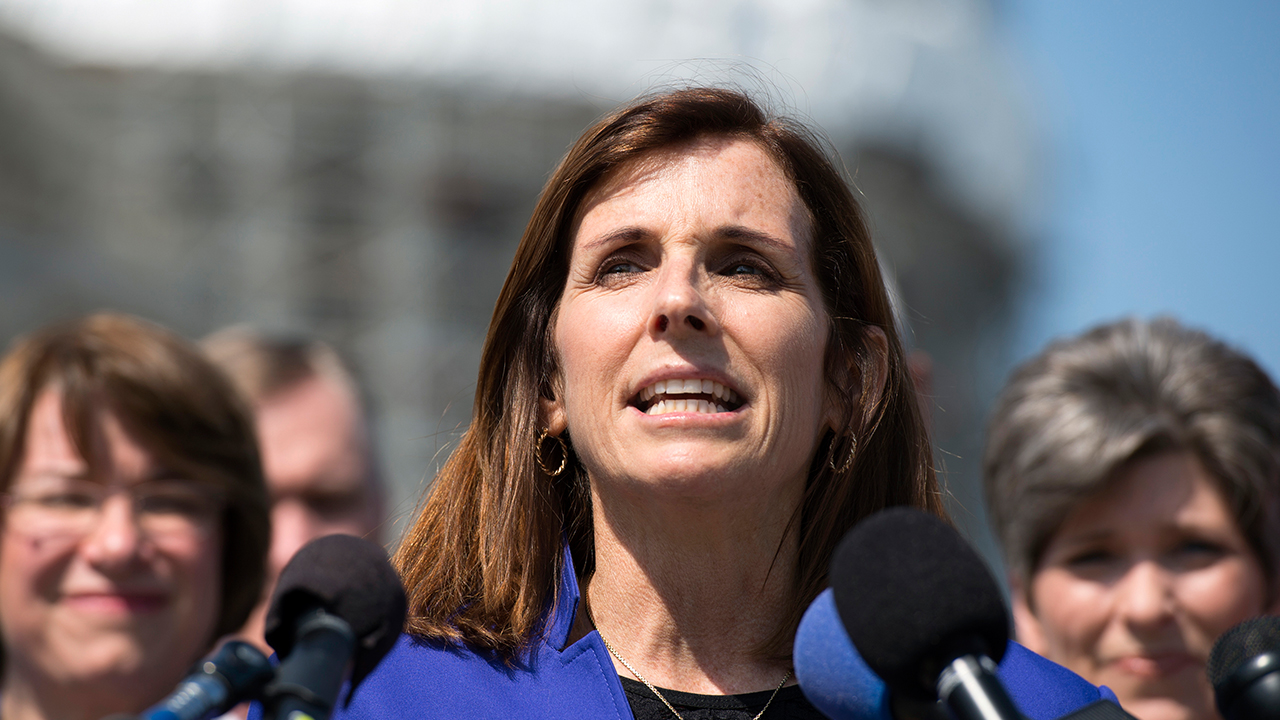 “It’s so deeply infuriating to me when somebody says a girl can’t do it.” “I certainly had to learn how to have thick skin but also not lose my humanity.”

McSally eventually became a squadron leader in Afghanistan and a colonel. But her tenure in the military was also marked by another major struggle—this one played out in the halls of the Pentagon, and courtrooms, and Congress—after McSally challenged a policy that required U.S. servicewomen to wear the body-covering abaya when traveling off base in Saudi Arabia.

“At the time, I was still trying to prove that women could be pilots, that a plane doesn’t care if you have ovaries or not,” says McSally, who as a major was the Air Force’s highest-ranking female fighter pilot at the time. “I was trying to blend in. The last thing I felt like doing was raising something related to women’s issues.”

But the rule, and the idea that the military should endorse female subservience to men, infuriated her. Again, she felt compelled to act. The battle eventually led to McSally’s suing the Pentagon, a change in the rules, and an act of Congress. But it put McSally in the crosshairs of critics in the armed services, and she believes it cost her professionally. It was also one of the formative lessons of her life.

There are other things from her career in the Air Force that McSally brings to her job as a legislator. She has sometimes been described as a pragmatist and a moderate. She pushes back on the moderate label. She describes her district as a third Republican, a third Democratic, and a third independent. It swung for McCain and Romney in 2008 and 2012, and for Clinton in 2016, making McSally one of the few members of Congress who have to worry more about a general election challenge than a primary challenge. But her political philosophy tilts more conservative, she says, and she values hard work, equal opportunity, and a limited role for government. But there is no push back on her pragmatism.

“I work backwards from the objective,” she says, describing her style of leadership and decision-making. “I come up with an achievable objective; I begin with the end in mind. I ask myself, ‘Is this a federal problem—does this literally take an act of Congress?’”

Once McSally has determined an objective, and deeply studied the policy, she begins to reach across the aisle. The bills that she’s sponsored have always had bipartisan support. And she’s comfortable with the tortuous path legislation takes in Congress, the need to secure backing, to work across the aisle and with the other chamber, and to support what is sometimes less than ideal.

“It’s easy when you vote for legislation that is 100 percent of what you want,” McSally says. “It’s the 51-to-49 votes that are the tough ones.”

That includes tough votes like hers this spring in favor of the Republican health care bill. McSally says she was not ready to simply sit back and do nothing as the insurance market in her home state began to crumble and as significant problems with President Obama’s landmark health care bill became apparent.

McSally had few illusions about Washington when she arrived after 22 years of military service and a stint in academia. In addition to her time working at the Pentagon while at the Kennedy School, she spent two years as an Air Force legislative fellow working on Arizona Senator Jon Kyl’s national security team. McSally was drawn to D.C. by the public policy, but with a low opinion of those working in the Capitol’s sausage-making factory. Her time in Kyl’s office changed all that.

“I blame him,” McSally says, tongue-in-cheek about Kyl. “That one year planted a seed with me—that you could make a difference.”

McSally still marvels at how a colleague can support her amendment and then turn around and vote against it. She scoffs at colleagues who are more interested in issuing a press release than in introducing legislation with a chance of becoming law. But despite her distaste for politics, she accepts it.

“I have to operate in this political theater,” she says. “I’m not naïve about it, I think I’m pretty effective in it, but I don’t pour fuel onto it and I don’t breathe life into it.”

Her relentless pragmatism helped her get legislation passed to keep her beloved A-10 fighter plane flying after it was slated to be decommissioned by the Obama administration. It has enabled her to increase support for veterans and border communities. And it’s helped her restore the rights of female World War II pilots to be buried in Arlington National Cemetery.

McSally was in attendance for the funeral of one of those pilots in Arlington after McSally’s legislation had made her burial there possible. “I remember sitting there in that moment in time saying, ‘You know, if today I take my last breath, I know that I fixed this.’ It was the right thing to do, and it was right for these women, and it was right for our country and for all who serve. That was pretty meaningful for me.”