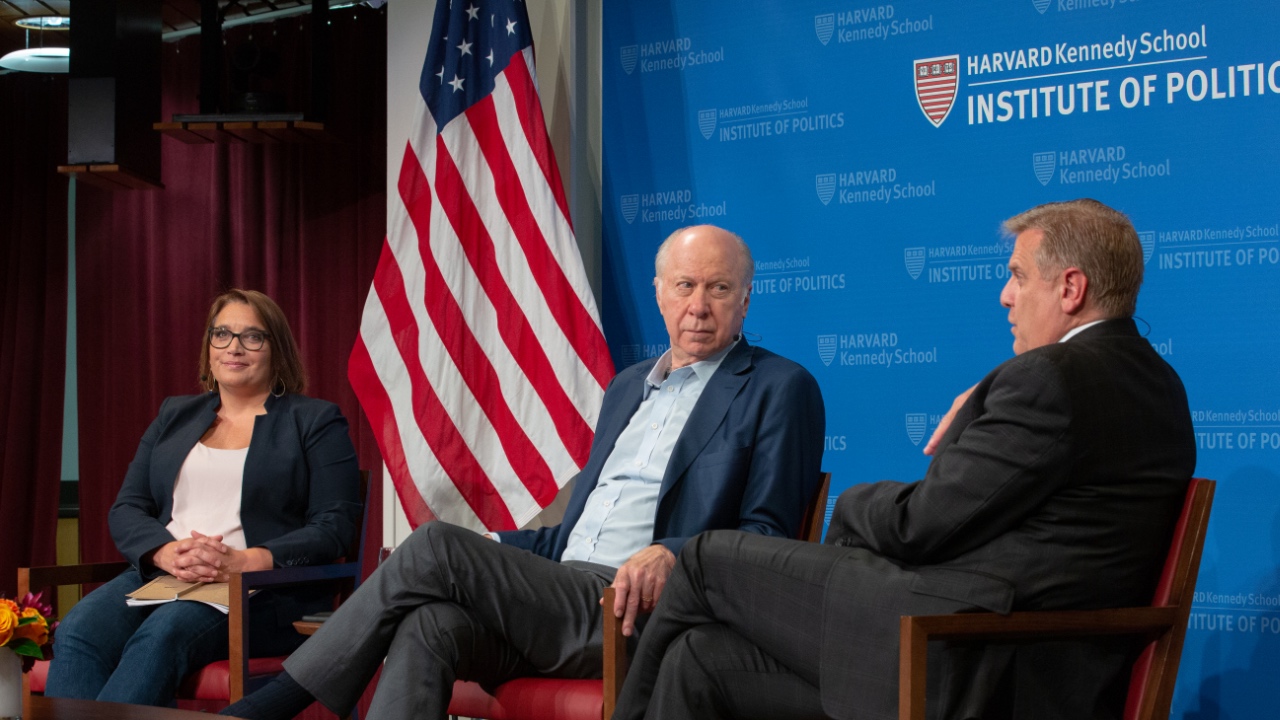 Gergen and King reflect on impeachment in IOP pop-up forum

Harvard Kennedy School’s David Gergen, public service professor of public leadership, and David King, senior lecturer in public policy, both have a commanding grasp of American political life. Together, they bring more than eight decades of involvement and study, deep historical perspectives and hands-on practical experience—Gergen as an adviser to four U.S. presidents, and King as a nationally renowned expert on voting and Congress. It’s no surprise that their conversation on impeachment with journalist Margaret Talev, a White House editor for Axios and former Institute of Politics Resident Fellow, at a John F. Kennedy Jr. Forum conveyed a rich sense of political history. Their conversation was the inaugural Pop-Up Forum, the Institute of Politics’ convening of experts to discuss breaking political news of the day. In an era of talking heads, the forum offered a welcome blend of context and analysis. Here are some excerpts, lightly edited for length and clarity.

David King: Impeachments are supposed to be very difficult. There have been only 19 impeachments of federal officers in all: only two of them were presidents [Presidents Andrew Johnson and Bill Clinton], 17 were not. It would be difficult to imagine a scenario now where the House does not actually vote articles of impeachment relatively soon, just with the evidence that's already out there. There are six committees that are working on different aspects of this, but most likely it'll just be one that actually quickly reports on the articles of impeachment. And then the drama switches over to the Senate where it's another interesting moment.

David Gergen: I think it's important up front to acknowledge and really emphasize that impeachment and conviction is a grave act within our country. The framers intended it to be an act of last resort, and because it can be so dangerous in the hands of a majority—that you can actually change the result of a national election if you have the votes. And there's something about that which strikes everybody, that goes to heart of what democracy is all about, and how it can function. It's something we should do very rarely and for most of our history we have. And I think it's very deeply troubling where we find ourselves now how we've changed from where we were.

Think about it this way: if you if you look at the first 36 presidents of the United States, only one was impeached and he was then acquitted. Since then, we've had nine presidents; three have now gone to the scaffold to be tried at impeachment. That's a real change, when one out of every three presidents is facing the possibility of impeachment. So this is something I think we need to think about and be reflective on as we go through this process. There’s going to be a lot of hyperpartisanship and there's going to be a lot of drama as these days go on. But even so I think we have to understand this is a moment that really is important for democracy, it's important we do it well.

If you look back to the Nixon impeachment when they went through this in the House Judiciary Committee, they made sure to have a bipartisan investigatory staff. It was one staff, not a Republican staff and a Democratic staff, there was one staff…. I worry that we're already into a partisan mode for this impeachment process, which is going to only leave us more poisoned and divided when it's over, however it comes out.

David King: When we look at the first impeachment with President Johnson, this was a moment where it is unlikely they would have been able to vote the articles of impeachment in the House had there not been the expectation that they would fail in the Senate. So there was already then, in 1868, this very partisan dynamic between two bodies. Likewise when President Clinton was undergoing impeachment in the House there was a sense that in the Senate maybe we'll be able to save this. And that takes a little pressure off of the Democrats in the House right now to take a very, very difficult vote, because some of those Democrats who will vote for impeachment understand that it's almost impossible to imagine a scenario in which President [Donald] Trump is actually convicted in the Senate.

David Gergen: My reading, and it may be faulty, of the Federalist Papers and [James] Madison's notes is that impeachment was intended to be part of the checks and balances written into the Constitution. It was one way to check a president who was beginning to abuse the powers of the office. But it also gave you ultimate authority, if you've got two-thirds of the vote, it did give you the authority to knock him out altogether. But that's never happened. I do think what you first and foremost want to do is get the president to stop misbehaving.

And it’s really important to understand too, that, if you look at [Alexander] Hamilton, Federalist No. 68, and the Madison notes, they make it quite clear that one of the greatest fears the founders had, and why they had high crimes and misdemeanors in there, was the possibility of foreign intervention and ascendancy in the American election process. They were definitely worried about that at the time and that's very clear.

David King: In the original Constitution, until it was amended in the Eleventh Amendment, the vice president was whoever came in second in the electoral college vote. So that person then became the president of the Senate—the vice president had no office in the executive branch. So the founders imagined that the trial would be happening in this other body as part of a big checks and balances scheme. But the founders also believed that there wouldn't be political parties in the way that we know them now. You would instead have these factions around the executive, the legislative and so forth. So it's a very different ball game now than of course what the founders ever intended.