Getting to 100 percent | Harvard Kennedy School
Skip to main content 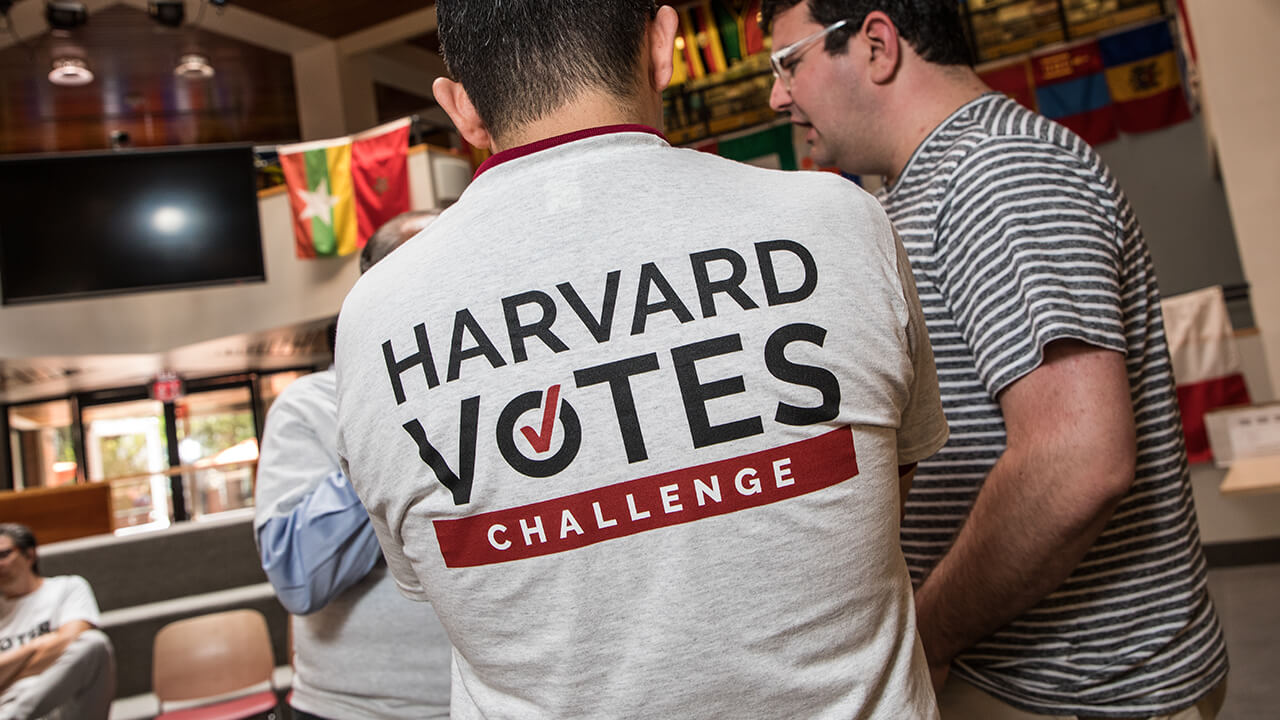 Armed with a grant from the President’s Administrative Innovation Fund, the Institute of Politics and the Ash Center are launching a robust new Harvard Votes Challenge for the 2020 elections.

The Harvard College Move-In Day to do list for the Class of 2023 just got a bit longer. Get dorm key. Check. Get student ID. Check.

Entering campus life and civic life will now happen simultaneously for first-year students, as part of an enhanced Harvard Votes Challenge aimed at the 2020 U.S. election season. The renewed challenge to civic engagement is being fueled by a grant from President Lawrence S. Bacow’s Administrative Innovation Fund, and it will be run jointly by the Institute of Politics and the Ash Center for Democratic Governance and Innovation at Harvard Kennedy School.

“I think for Harvard, it’s literally mission-central. It’s baked right into our mission of creating citizen leaders,” IOP Director Mark Gearan says of the renewed voter push. “The Harvard Votes Challenge really deepens the kind of personal experience that students will have with civic engagement. And this whole move-in day effort really speaks to that.”

At last September’s Convocation, Bacow made voting the Class of 2022’s first homework assignment. “If you are eligible to vote, we expect you to register, to inform yourself of the candidates and issues, and to cast a ballot,” he told the students. The new effort, Gearan says, builds on Bacow’s and Harvard’s commitment to be a national leader for civic engagement in higher education.

“It's very much part of our heritage and all the ethos of the university, and education is looking to Harvard in many ways,” Gearan says.  To that end, the renewed Harvard Votes Challenge is aiming to meet an ambitious goal of 100% eligible student voter participation in the 2020 elections across all 12 degree-granting schools.

Created prior to the 2018 midterm elections, the Harvard Votes Challenge is a nonpartisan, University-wide effort to encourage voter participation. Modeled after a similar effort at the University of Michigan and spearheaded by the Kennedy School’s Archon Fung, Winthrop Laflin McCormack Professor of Citizenship and Self-Government, the 2018 push attracted more than 150 student volunteers and drove turnout increases at Harvard-area polling stations by a range of 13% to 18%. At the Kennedy School, the challenge prompted 92% of American students signed up for TurboVote—an app created by HKS alumni Seth Flaxman and Kathryn Peters, both MPP 2011, that helps voters register and remember to vote—and inspired a voter drive by the HKS European Students Caucus for the recent European Union elections.

The new Harvard Votes Challenge effort will feature a number of enhancements, including a dedicated staff presence at all 12 Harvard schools and as well as efforts to encourage faculty and staff to vote. Participation drives will be coordinated with a number of annual events, including National Voter Registration Day on Sept. 24 and the Harvard-Yale football game on Nov. 23.

“We are going to try to make it fun and educational, and really draw a larger picture of what it means to be civically engaged,” says Teresa Acuña, the associate director of the Ash Center’s Democratic Governance program. “Voting is one thing, but civic life is actually bigger than that. Modeling civic responsibility starts at Harvard, and we hope students will take those healthy habits with them when they go out into the world.”

How to boost turnout and what happens after: The obstacles to, and consequences of, increasing voter participation