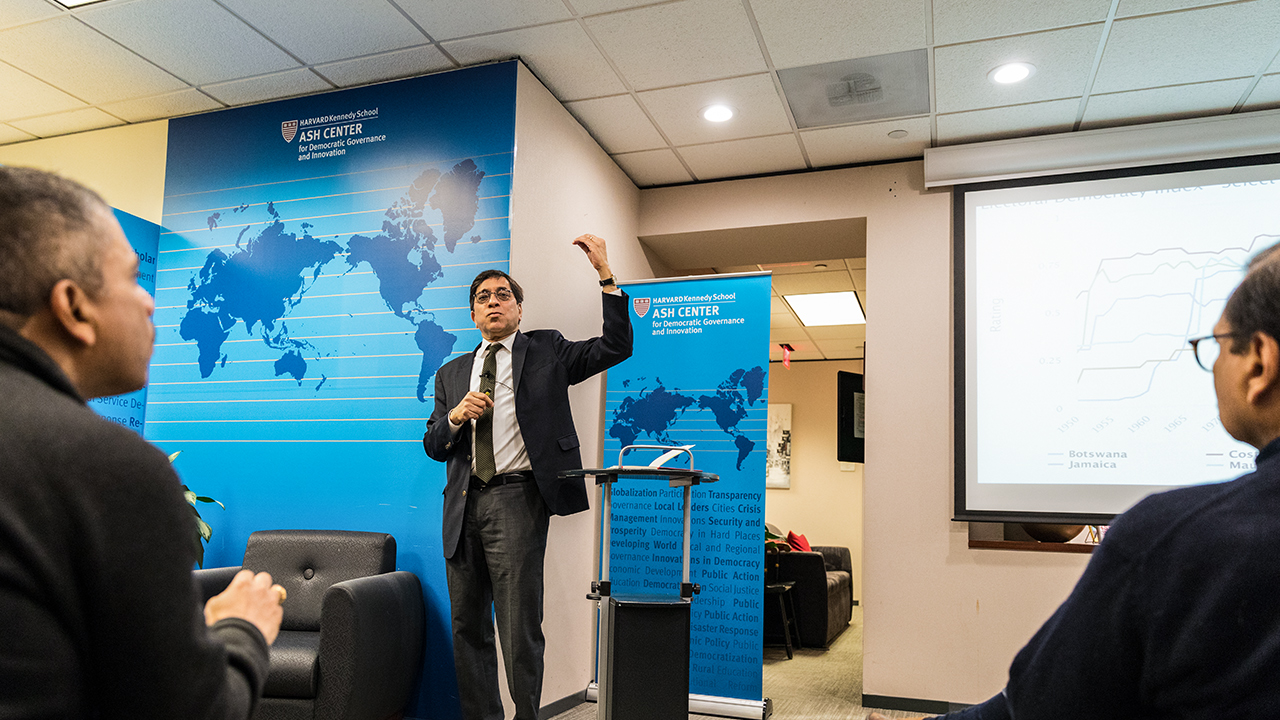 With national elections under way in India, hundreds of millions of voters are casting ballots at nearly a million polling locations. For the world’s most populous democracy, it is a herculean feat of electoral administration. But beyond the heavy logistical lift, this election has the potential to shape the very future of the country’s pluralistic political system, according to noted India expert Ashutosh Varney.

Polls show Prime Minister Narendra Modi is likely to secure a second term in office and maintain his Hindu nationalist party’s hold on power, said Varshney, Sol Goldman Professor of Political Science and International and Public Affairs at Brown University and a resident fellow at the Ash Center for Democratic Governance and Innovation at Harvard Kennedy School. Just how successful they are could have massive implications for the nature of democracy in a country characterized by ethnic, linguistic, and religious diversity, said Varshney, who was speaking at a discussion on India’s elections at the Ash Center earlier this month.

Modi’s campaign has been propelled by a series of skirmishes in February between India and neighboring Pakistan following a suicide bombing attack against police forces in Indian-controlled Kashmir. Modi successfully used this series of artillery exchanges and retaliatory air strikes between Indian and Pakistani forces to play up his hardline national security credentials in the run-up to the elections. “Modi has campaigned vigorously on how decisive he is, and how, if Pakistan hits, he would hit back doubly strong,” said Varshney, who described Modi as the first right-wing populist to rule India. “It’s really the first time that this argument has emerged in electoral politics.”

Conducting accurate opinion polling in such a large and linguistically diverse country can be a challenge. Still, analysts expect Modi’s Bharatiya Janata Party (BJP) to fare well when the votes are tallied later in May. But Varshney thinks it is unlikely that the BJP, which won 282 seats in the country’s 543-seat parliament in 2014, will be able to repeat its capture of an absolute majority. “The BJP is likely going to gain enough support to form a government, probably in the framework of a coalition,” he said. But should the BJP gain an absolute majority in parliament, “it will head towards a Hindu nationalist version of the nation,” Varney said.

While the BJP campaigned on governance and corruption issues in the last elections, the party’s platform this time has been influenced more heavily by Hindu nationalism, or Hindutva. Varshney describes the concept as “a political doctrine, which makes the claim that the Hindus are the primary owners of the nation.” He terms it a sort of Hindu supremacism in which the non-Hindu minority of India accedes to the control or ownership of the state by the Hindu majority. “White nationalists in the United States would make a roughly analogous argument,” he added.

And even though an absolute majority would not give the BJP sufficient political power to formally amend India’s pluralistic constitution to further a Hindu nationalist vision of the country, Varshney concluded, “the sheer weight of another electoral majority will allow very big changes in the country even if the constitution will not formally change.”