Young voters energized, anxious: Institute of Politics poll shows more young people are worried about direction of US and geared up to vote | Harvard Kennedy School
Skip to main content 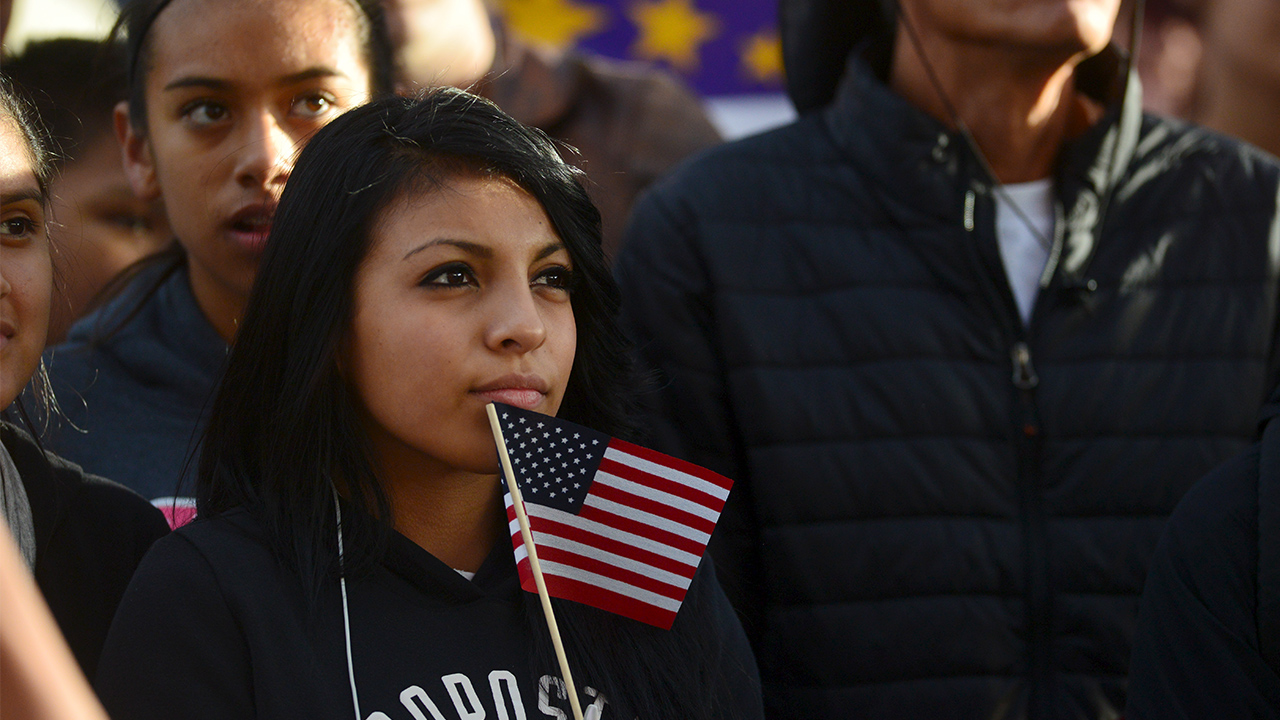 Young Americans, poised to play a more significant role in the next presidential election, embrace progressive positions, are concerned about the moral direction of the country, and place little trust in older elected officials.

Nearly half of young Americans—and young women in particular—taking part in a national survey said they had experienced anxiety in the previous 24 hours. And that anxiety is more prevalent among young people who feel the country is headed in the wrong direction.

The twice-yearly poll of young Americans, conducted by Harvard Kennedy School’s Institute of Politics (IOP), was released Monday, hours before an election town hall with five Democratic presidential candidates co-hosted by the Kennedy School’s IOP, the New Hampshire Institute of Politics, and CNN. About 200 Harvard students trekked up to St. Anselm College in Manchester, New Hampshire, for the town hall, in the state holding the nation’s first presidential primary for the 2020 election.

The IOP’s spring 2019 poll found that 48 percent of respondents between 18 and 29 said they had experienced anxiety in the previous day. Those who felt the country was on the wrong track were more likely to be anxious regardless of their political affiliation. Women unhappy with the direction of the country were more anxious than men with that view (62 percent to 45 percent) and even more female college students who feel the country is on the wrong track felt anxious—66 percent versus 46 percent for men.

“It’s no secret that social media has exacerbated the stress and anxiety that is already so prevalent in the late-teen and early adulthood years of young Americans,” said John Della Volpe, director of polling for the IOP. “However, for the first time, we now have evidence that the state of our politics is contributing to the mental health challenges millions of young Americans already face.” 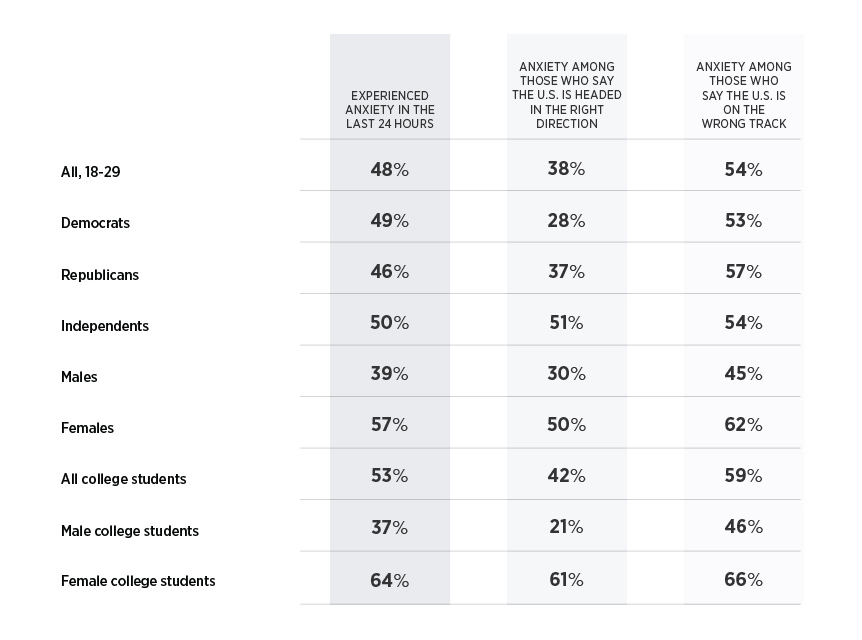 The twice-annual survey tests opinion of 18- to 29-year-olds, parts of the millennial and Gen Z generations who will make up more than a third of eligible voters in 2020. The poll of 3,022 young people was conducted between March 8-28 and has a margin of error of plus-minus 2.6 percentage points at a 95 percent confidence level.

Della Volpe, who has run the IOP’s youth poll since it was launched in 2000, noted that young people are more politically engaged than four years ago: 43 percent say they are likely to vote in their primary or caucus in 2020, up from 36 percent in 2015. Democrats are especially fired up, from 44 percent in 2015 to 58 percent this cycle. 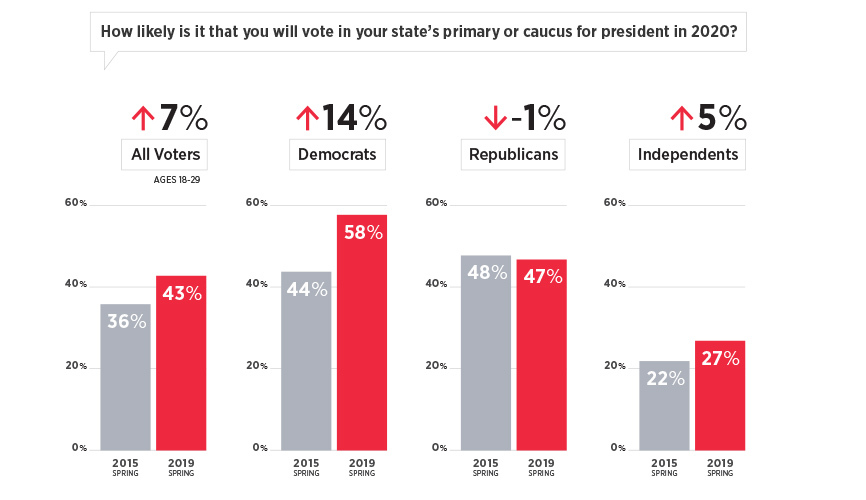 The survey also detected generational tension between young voters and baby boomers. Asked if the baby boomers (aged 55 to 73) “care about people like me,” 39 percent disagreed compared with 18 percent who agreed—their skepticism of baby boomers carried over to elected officials.

However, young voters are willing to embrace candidates regardless of age as long as they feel those candidates understand and motivate them (as support for 77-year-old Senator Bernie Sanders demonstrates).

IOP Director Mark Gearan told reporters Monday: “What we’re seeing is young voters are looking to be empowered and want to hear candidates who are aligned with their values.”

In a CNN.com column about the poll, Harvard College students Richard Sweeney, K. Cathy Sun, Naomi Davy and Will Matheson, all members of the IOP, cautioned candidates against misconceptions that young voters are “left-wing Twitter warriors, bleeding-heart socialists or an ignorant monolith that cares more about the latest celebrity showdown than about substantive issues.”

“We want candidates who will engage us on the substance of the issues. We aren't here to listen to empty catchphrases. We're waiting for concrete solutions and well-grounded ideas on issues that weigh heavily on our minds,” the four students wrote. 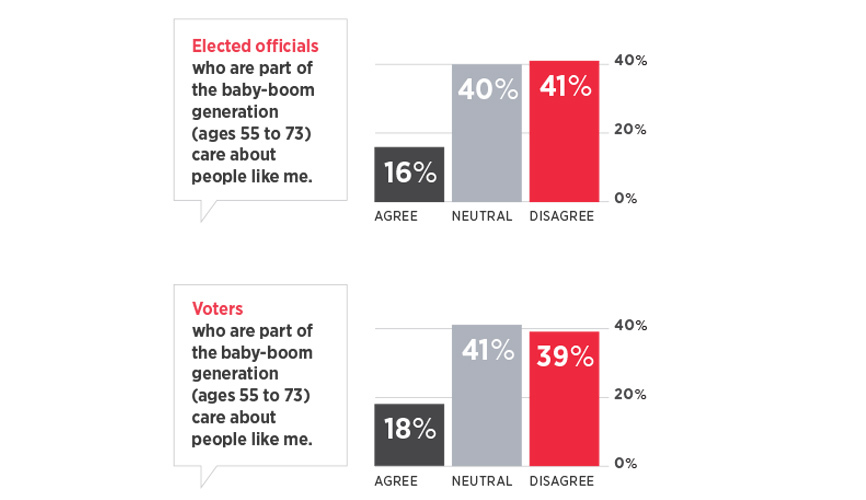 Concern over the moral direction of the country rose since spring 2015, with 61 percent saying they are concerned (up from 52 percent); just 9 percent said they did not have that concern, compared with 16 percent in 2015. Among Democrats, the share who expressed concern about the moral direction rose 24 percentage points, while fewer Republicans voiced that concern—down from 73 percent to 64 percent. 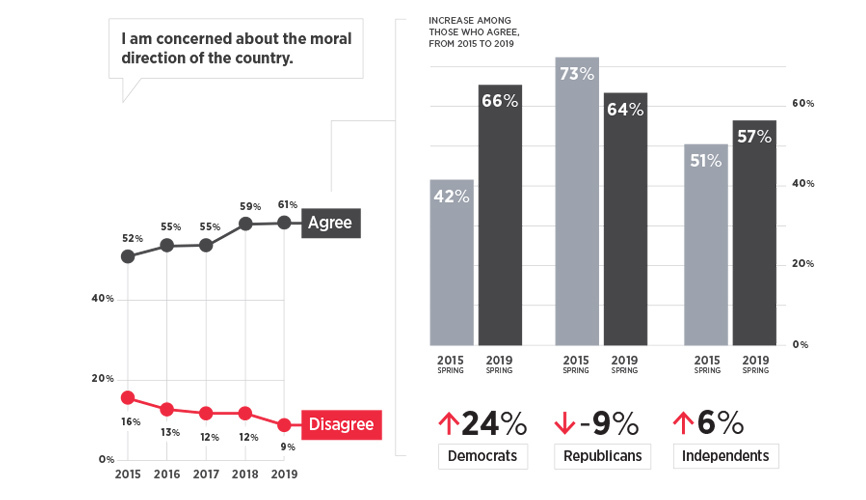 On policy issues, sentiment in favor of confronting climate change rose sharply compared with four years ago. A total of 46 percent said “government should do more to curb climate change, even at the expense of economic growth.” Four years ago, just 32 percent agreed with that statement; disagreement fell from 23 percent to 16 percent. 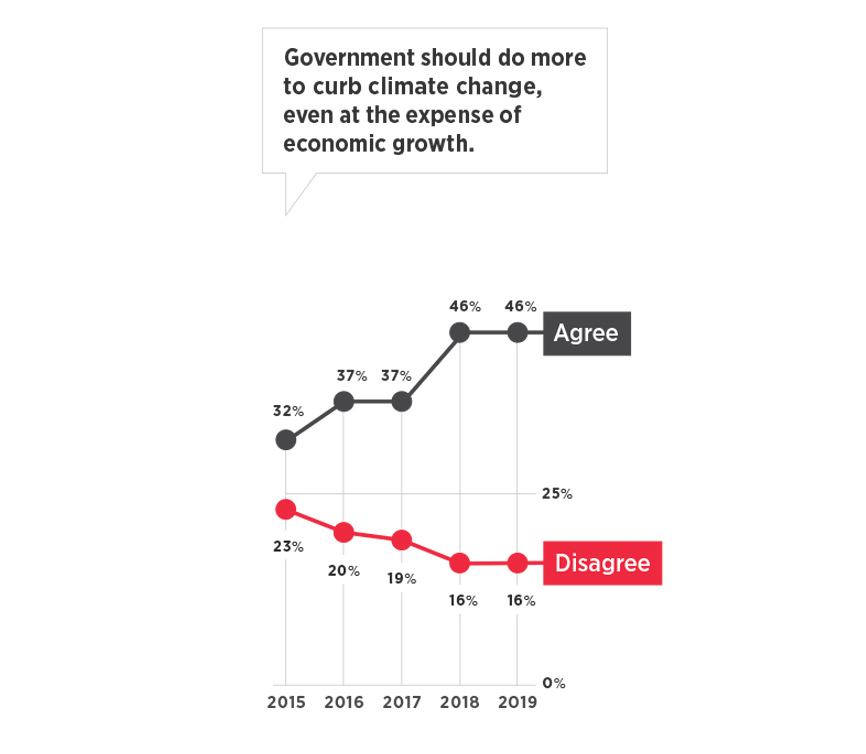 Despite their anxiety and concern about the direction of the country, young Americans appear more confident about their economic prospects than four years ago: a total of 42 percent of college students said it would be easy or somewhat easy to find a job after graduation, up from 26 percent in 2015.

Overall, those polled embraced progressive policy issues more often than those surveyed in 2015. Support for basic health insurance for all, even at government expense, rose from 46 percent to 52 percent. And the share of those saying the government should spend more to reduce poverty rose from 41 percent to 50 percent.

Flipped chambers, historical trends, and the Trump phenomenon: Political experts analyze the meaning of the midterms