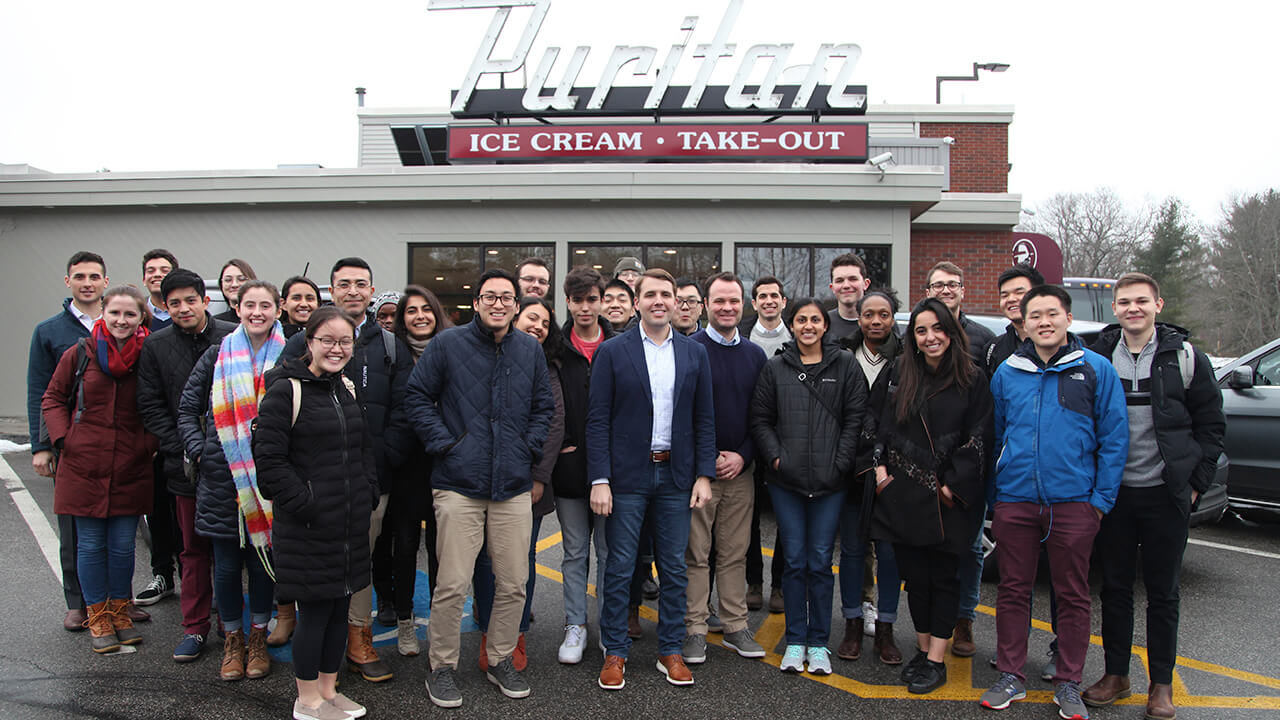 As the motor coach pulled up beside Harvard Kennedy School’s Taubman Building to pick up a group of students from the School and Harvard College, its bright color scheme seemed perfectly apropos: A big purple bus headed to a crucial purple state.

The students’ Jan. 25 trip to New Hampshire—a key battleground state in the 2020 election—was designed to immerse the students in the high-stakes run-up to the Feb. 11 first-in-the-nation presidential primary there. The trip was co-sponsored by the Center for Public Leadership and the Institute of Politics at Harvard Kennedy School as part of a course called “Hi! I’m Running for Office” taught by Massachusetts state Sen. Eric Lesser.

“On-the-ground learning is literally written into CPL’s mission, and helping to build and train servant leaders is what we do,” said Center for Public Leadership Director Wendy R. Sherman. “New Hampshire is an epicenter of learning about politics and our political process. It was quite something for our students to feel that energy, meet with constituents, and really peek under the hood of U.S. politics in the days leading up to the primary.”

Institute of Politics Director Mark D. Gearan said it's vital to give students experiential learning opportunities at "this important time in civic life."

"Our engagement in New Hampshire, led by Sen. Eric Lesser, provided our students a unique insight to the first-in-the-nation primary," Gearan said. "Students were able to engage with public servants and political operatives and gain on-the-ground experience canvassing and talking to voters."

After the 70-minute drive to Manchester, the students began their day at the New Hampshire Institute of Politics at Saint Anselm College. Every four years, the former National Guard armory building becomes one of busiest places in the state, as campaigns and the national media descend for the primary.

“For me, this is the Super Bowl,” said Neil Levesque, the executive director and chief of staff for the New Hampshire IOP, who gave the students a tour of the facility and its extensive collection of presidential memorabilia, ranging from a podium President John F. Kennedy spoke from on election day in 1960 to one of the first red “Make America Great” hats given out by President Donald Trump.

During a mostly off-the-record chat, Levesque also told several campaign war stories, including one about a meeting with then-candidate Donald Trump. Asked what was different about this year’s primary season by Harvard IOP Executive Director Amy Howell, he noted that there were an unusually high number of young people and people from out of state involved in the current campaigns.

“On the Democratic side we really had 26 legitimate candidates to start, and they’re bringing people from the outside because there just aren’t enough skilled operatives in New Hampshire to run all these campaigns,” said Levesque, a Nashua, New Hampshire, native who worked on the staff of former Republican U.S. Representative Charles Bass.

The students met US Representative Chris Pappas, whose family owns the Puritan, a fixture in New Hampshire politics.

A volunteer for presidential candidate and US Senator Elizabeth Warren of Massachusetts gives the students a briefing before they go door-to-door.

Before going door-to-door, students did a role-playing exercise where one of them played a canvasser and the other an undecided voter.

The students were allowed to observe a closed meeting where the Bernie Sanders campaign picked a delegate to the Democratic National Convention.

The first stop on the trip was the New Hampshire Institute of Politics at St. Anselm College.

One of the guest speakers was US Representative Chris Pappas of Manchester (right), who was introduced by State Senator Eric Lesser of Massachusetts.

The students then got another inside look at democracy in action in the adjacent auditorium, where representatives of US Sen. Bernie Sanders of Vermont were gathering to choose his campaign’s New Hampshire delegate to the Democratic National Convention in July.

The next stop was a luncheon event at the Puritan, an iconic restaurant, ice cream parlor, and function hall that is a mainstay of political events during New Hampshire’s primary season. The Puritan is co-owned by the family of Congressman Chris Pappas, the Democratic congressman from New Hampshire’s 1st Congressional District, who was one of several speakers over lunch.

The speaker series was hosted by Lesser, a graduate of Harvard College and Harvard Law School who worked in the Obama White House and in 2008 served as the Obama campaign’s New Hampshire ground logistics coordinator. Lesser’s “Hi! I’m Running for Office” course teaches students how to successfully run for office and how to govern effectively once they’re in.

Lesser’s first guest was James Merrill, a veteran Republican operative for the campaigns of President George W. Bush and Senators Mitt Romney and Marco Rubio. Merrill talked about the intensity of the run-up to the primary and the hands-on contact with voters it takes for candidates to be successful in New Hampshire.

Lesser then introduced Stephanie Murray, the editor of POLITICO’s Massachusetts Playbook, which he called a “must read for everyone involved in politics and government, not just in Massachusetts but … for the whole country.” Murray talked about her path from a student journalist at UMass Amherst to local news to POLITICO, gave the students some insight into how political journalists are covering the Democratic field, and discussed the effect of Twitter and other social media streams on campaigns and campaign coverage.

The final guest was Pappas, who earned his bachelor’s in government from Harvard College in 2002. Pappas talked about his memories of growing up around politics and campaigns, his own decision to enter politics, and the importance of participation, especially among younger voters who are fast becoming a crucial voting bloc.

“In the 2018 midterms we had the one of the highest turnouts not just right here, but across the country. It was the highest midterm turnout of any midterm in recent history,” the 40-year-old congressman said. “And it was the first election ever where Millennials and Generation Xers comprised the majority of the electorate. So I think there are some exciting things happening out there.”

Afterwards, Pappas and Lesser both said they hoped the students would consider serving the communities where they grew up.

“We really hope the students think about going home to the communities that invested in them and took care of them as kids and sent them off,” said Lesser, who returned to run for office in his hometown of Longmeadow, Massachusetts, after serving in the White House. “That's really important. We need more people, especially young people working in their hometowns, to make a difference.”

Pappas said the country is “really looking to them as its next generation of leaders.”

“Democracy requires all of us to not be bystanders but be active participants,” he said. “Our system refreshes itself when individuals with good ideas and the right values are able to be a part of it.”

In the afternoon, the students were given the choice to experience door-to-door canvassing with any one of the four top-polling Democratic campaigns: Bernie Sanders, Joe Biden, Elizabeth Warren, or Pete Buttigieg. They were given brief trainings at the campaign offices and were driven by campaign volunteers to nearby residential neighborhoods.

Abby McElroy, a first year at Harvard College studying sociology and education, chose to canvas for Warren—even though she is personally undecided about who she will actually support.

“I'm much like the voters of New Hampshire … pretty undecided as well,” she said. “So I feel a little bit nervous about going out and like pushing people to make a decision that I'm not 100 percent committed to myself. But at the same time, it's good to be involved. So I'll have some conversations, maybe voters will give me interesting insights.”

“I like how he candidly talks about the corruption in our political and economic system,” Pratt said. “I think he’s the only candidate that’s really focused on justice as a core tenet of the campaign to where it seeps into every issue.”

The final stop before the return to Cambridge was a debrief at Murphy’s Taproom, a tavern in Manchester’s busy Oak Street commercial district. The students traded stories over nachos and chicken wings as the program drew to a close.

“I would 100 percent recommend it,” said Abby Horgan MPP 2020. “It can be hard sometimes being in Cambridge and so consumed at school, so it was really great to step out of the bubble and to come up here and actually experience the stuff I’m learning in class all the time.”