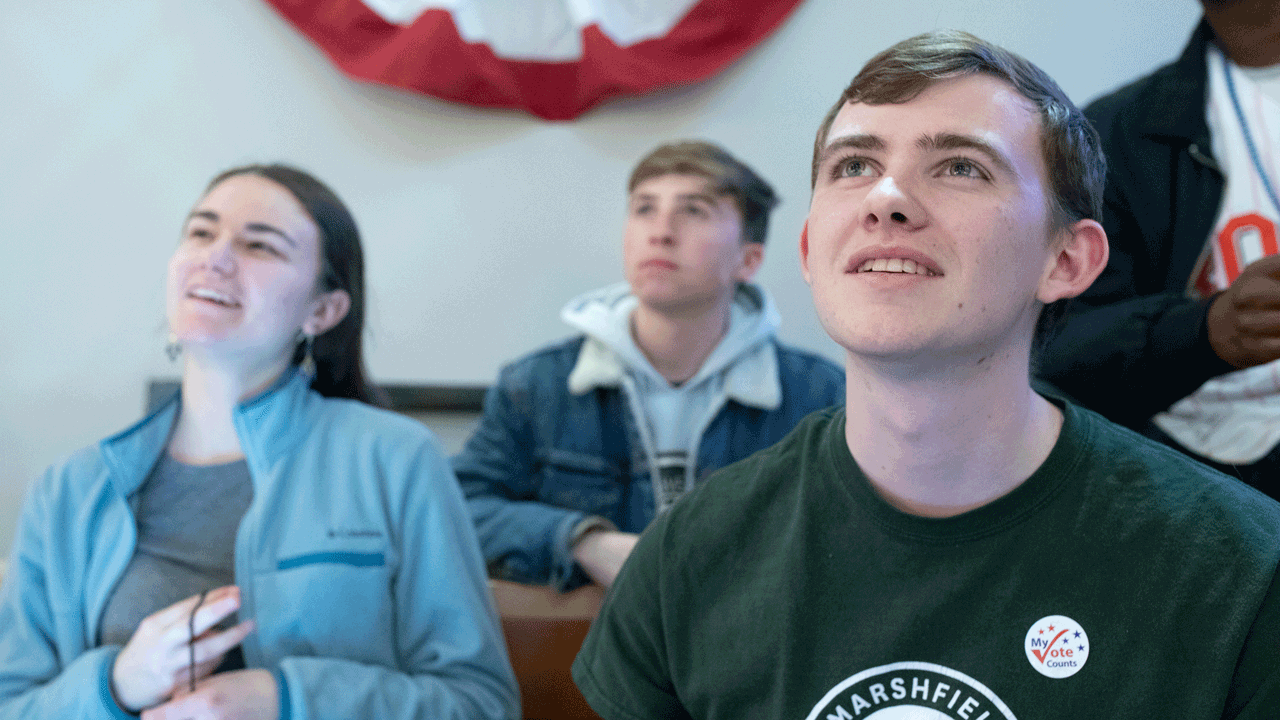 Students, faculty, and fellows gather to see history being made in a momentous day of U.S. primary elections.

IOP watch events are always festive gatherings, full of community, collegiality, free food, and swag. “For a place like the Institute of Politics or the Kennedy school, Super Tuesdays are kind of a combination of Christmas and New Year's and July Fourth all rolled into one,” Gearan said, glancing up at the giant screen above the Forum showing CNN’s primary coverage and the results rolling in. “You see so many interested people and so many people wanting to be together in community.” But the sense that something was happening that the pundits and the press had not preordained added extra buzz. “You can sort of feel that energy—this is an exciting time.”

The evening opened with predictions and punditry from some of the IOP’s Spring 2020 Resident Fellows, including Tiffany Cross, Mark Harvey, Rohini Kosoglu, Tara Setmayer, and Governor Bill Walker. Setmayer, a television commentator and former GOP communications director, pronounced herself happy with Biden’s surge, since she’s rooting for a moderate to replace the current occupant of the White House.

“Someone who can give people like me who are politically homeless right now an alternative,” she said. “There has to be a return to normalcy, decency, the ability to govern effectively. All those things, our democratic norms and ideals, are under attack.”

Setmayer said working and engaging with students at the IOP and Harvard Kennedy School has been an eye-opener for her. “Oftentimes the criticism of students is that they're not paying attention or not engaged,” she said. “And that is certainly not the case here. And that is so encouraging. It’s really reinvigorated me and given me hope that the next generation … is engaged and that they are paying attention.”

Walker, an independent who was only the second Alaska governor to be born in the state, echoed Setmayer’s assessment of the students he’s worked with. “They’re phenomenal. I'm learning way, way more from them than they are learning from me,” he said. “So that part I love a lot.”

Walker said the students he’s talked to seem to be “frustrated” by the current political process and what he sees as a stranglehold on power by the two political parties and entrenched interests. “But I love the curiosity that I’m running into here,” he said. “The intellectual curiosity about: Is there a better option?” 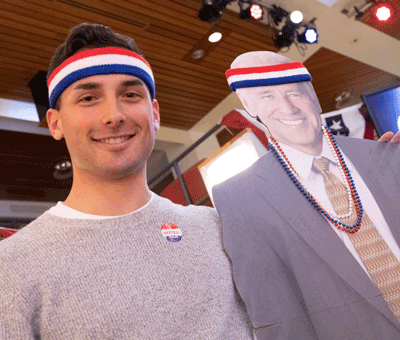 The watch party is one of a number of recent Harvard Kennedy School and Institute of Politics initiatives to drive student engagement and participation, including a hands-on trip to New Hampshire in January for that state’s primary and the recent launch of the new Harvard Votes Challenge website in collaboration with the Ash Center for Democratic Governance and Innovation.

Students had a range of reactions to the night’s developments. Many had animated political conversations, while others watched the big screen with emotions ranging from eager interest to dismay as Biden took early states like Virginia and North Carolina. Still others rushed in to grab a slice of pizza or some chicken tenders and then headed out again to phone-bank for their favorite candidates still competing in states like California and Utah where the polls had not yet closed.

Chris Cantwell, a Harvard College sophomore pursuing a joint concentration in government and computer science, was subdued as it became clear that his chosen candidate, U.S. Senator Elizabeth Warren from Massachusetts, was in for a tough night. Cantwell, who worked as a campaign fellow for Warren in Iowa over the winter break, said that regardless of the outcome, he appreciated the atmosphere at the watch event and the mission of the IOP.

“On the national level you see a lot of people who seem to be at these unbreakable impasses. They seem to be saying these ridiculous things, and you don't know how you'd ever work with them,” he said. “But here there are a lot of smart, thoughtful people who have opinions all over the place and you can still find, you know, reasonable places to agree to disagree—reasonable places to find middle ground and to learn from each other."

Aisha Iqbal, a second-year MPP candidate at the Kennedy School, was proudly wearing a “Bernie 2020” shirt to show her allegiance to U.S. Senator Bernie Sanders of Vermont and discussing his chances with fellow Sanders supporter and MPP candidate Phil Pullman. “I think it's as frustrating that there has been a clear consolidation of support by the centrist candidates,” she said, referring to the recent withdrawals of South Bend Mayor Pete Buttigieg and U.S. Senator Amy Klobuchar from the race and the fact that early returns for Sanders seemed disappointing (he later won Utah and California). Still, the sense of community at the event was a plus, she said.

“We get to hang out with everybody, so it’s great,” she said. “I think it's a very engaging night. And the fact that they have food—really helpful and supportive.”

“Like the light came on”: Andrew Gillum on speaking up and running unapologetically