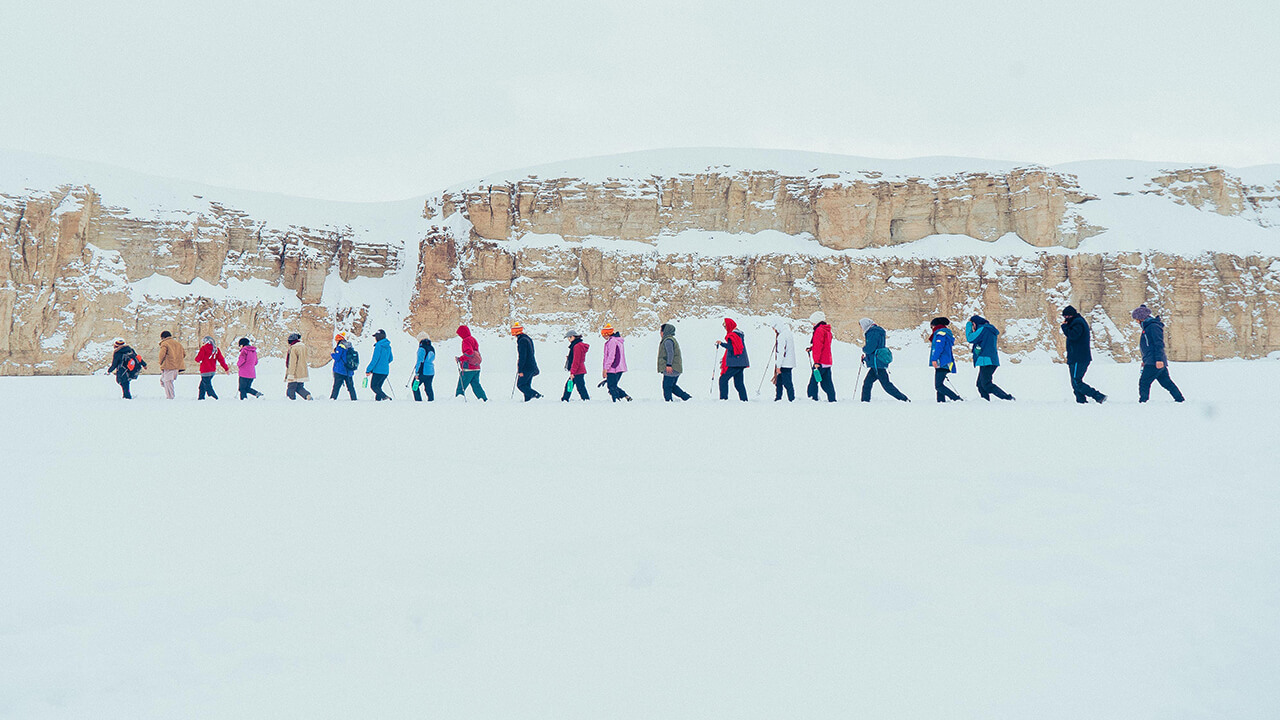 A new mountain to climb

Marina LeGree MC/MPA 2014 built a program to help young Afghan women find themselves through mountaineering. Now she is helping them find new lives.

MARINA LEGREE MC/MPA 2014 WILL NEVER FORGET the week in mid-August when the Taliban swept back into control of Afghanistan and her job suddenly changed from lifting young Afghan women up to getting them airlifted out.

“It was very apparent very quickly that they did in fact need to flee,” LeGree says about the participants, alumni, and staff of Ascend Athletics, the NGO she founded, which uses mountaineering and athletics to empower young women with self-confidence and leadership skills. Working to relocate them, she says, “has been the dead opposite of everything I’ve ever stood for in Afghanistan: strengthen communities; create change. I never wanted to be a pipeline for people to leave.”

Speaking in late October, LeGree said the dust was settling from 12 grueling weeks of nonstop phone calls, emails, texts, networking, and basically begging. She successfully relocated the vast majority (a handful elected to stay) of the 133 members of the Ascend community. Just during the course of her interview with HKS Magazine, she was interrupted by a text from Kennedy School classmate and Chilean Ambassador to Ireland Carla Serazzi MPA 2014, who is helping resettle 10 Ascend families in Santiago.

“It’s a bit surreal. My head is still spinning,” says LeGree, who currently lives in Naples, Italy, with her husband, a U.S. Navy rear admiral. “I still can’t wrap my head around the fact that the Taliban are in charge and girls can’t go to school and all the things we worried about are happening.”

Just three years ago, Ascend had reached a literal high point. In 2018, Hanifa Yousoufi, an alumna of the program, became the first Afghan woman to climb the country’s highest peak, Noshaq, which rises 24,580 feet above the Wakhan Corridor in the Hindu Kush mountain range. Noshaq had first been successfully summitted by a team of Afghan men just 9 years earlier. 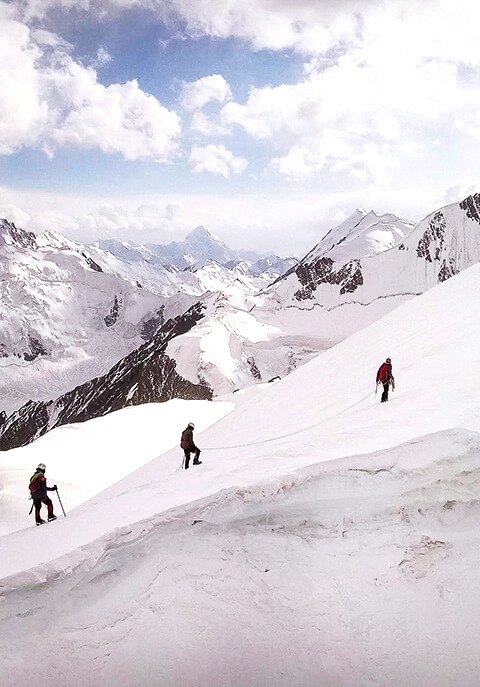 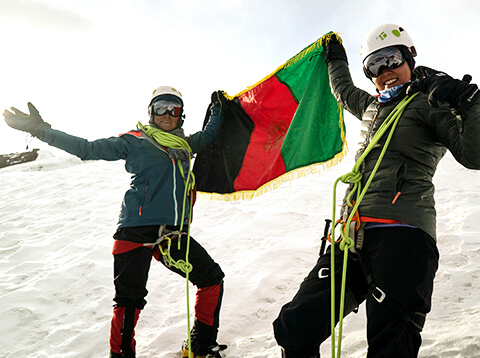 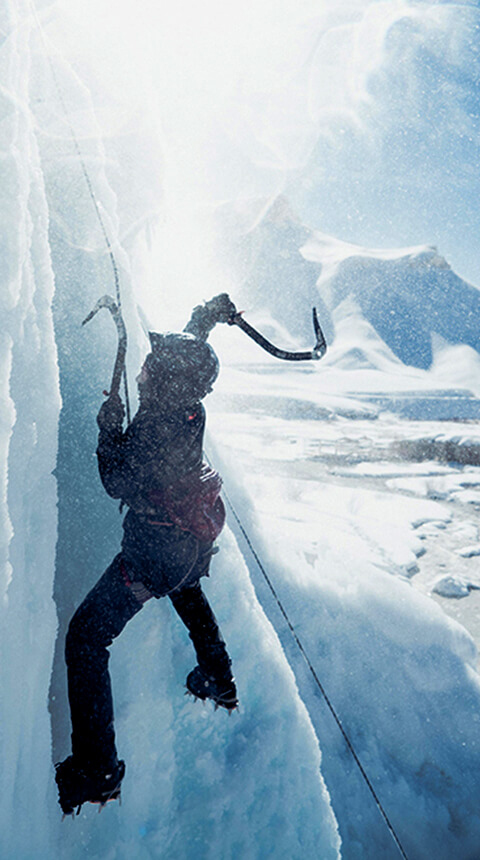 “I needed a reset. I thought, ‘If I come back, I’m going to do something for girls.’”

Ascend was born in large part from LeGree’s own love of athletics and the outdoors. She grew up in southern Washington state, where she played basketball, softball, and threw the javelin in high school. She went on to play softball at Washington State University, where she earned her bachelor’s degree in political science. After graduating in 2001, she went to the Republic of Georgia to work as an assistant to then-President Eduard Shevardnadze’s head translator.

She returned to the United States a year later and earned her master’s in international development from George Washington University, which led to her first job in Afghanistan. Working for the United Nations’ International Organization for Migration, she was stationed in Faizabad, the provincial capital and largest city in the remote, mountainous northern province of Badakhshan, where she got her first taste of life as a woman in Afghanistan.

“I was living like Afghans live, which for a woman means you can’t go outside, and which means you don’t get to move physically,” she says. “You cannot move as a woman—everyone will stare at you. You can’t go outside without judgmental eyes on you, and it’s suffocating. That part of the experience was awful.” 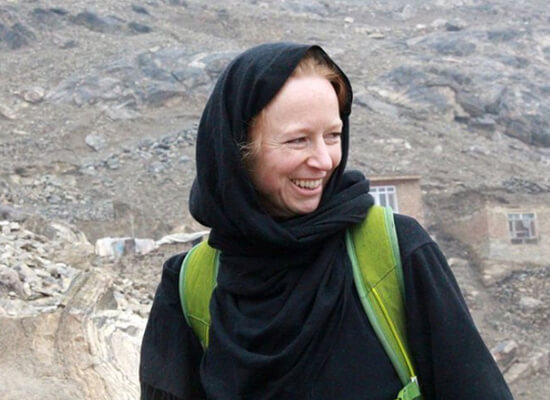 “I wanted to surround myself with people who had done different things and who inspired me and who would have different viewpoints, and that’s what I got.”

Desperate for a physical outlet, LeGree first discovered yoga. “It was really good for my mental health and physical health,” she says. “And as I was looking for other ways to exercise, the mountains were right there.” Soon some other ex-pats from a Swiss-based NGO took her hiking and she was hooked. The idea of empowering women through climbing and athletics began forming in the back of her mind.

For the next six years, though, she worked for NATO and for the U.S. military in Afghanistan, providing support to troops and civilian personnel doing stabilization work in local communities as part of the anti-insurgency effort. During that period, she designed a methodology for analyzing the stability of a given area or region, which was approved by the U.S. Agency for International Development and the government of Afghanistan as a national stabilization programming standard.

“I had a sort of pragmatic view and I felt comfortable in the military space,” LeGree says. “So that got me into a civil military career, and I kept getting picked up for job after job.” But being connected with the U.S. occupation also had its drawbacks, including nagging suspicion that followed her from post to post. “Everybody thought I was a spy, basically,” she says.

As her work and the occupation wore on, she was also increasingly disheartened by the level of corruption she observed in both the Afghan government and the U.S. occupation effort. “I worked with a guy who ended up doing five years at Leavenworth [correctional facility] because he rigged the contracting process, and tried to import opium to the United States at the end of this tour and got picked up by the FBI,” she says. “And he was our civil military representative, so he was the most visible face of the U.S. military in the province.” 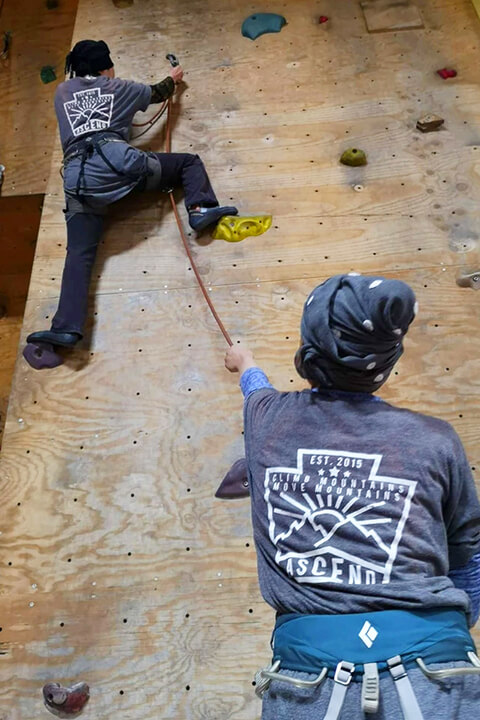 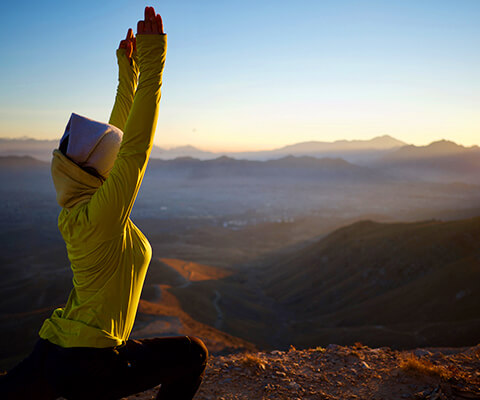 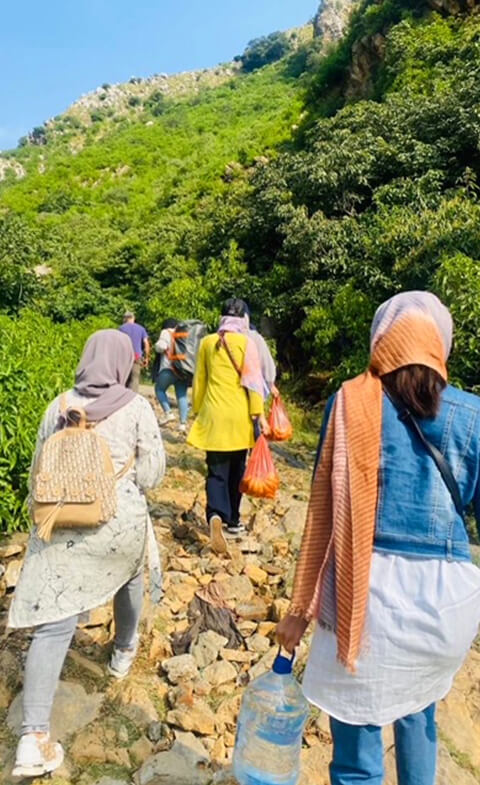 “We were pushing uphill, trying to do good things in Afghanistan with something that was foundationally flawed,” she says. “The fundamentals were all wrong. No outsider can fix this for Afghans, and no society that disempowers half its population is going to succeed. I was tired of it and I needed a reset. I thought, ‘If I come back, I’m going to do something for girls, something that’s not dirty.’”

She found her reset at the Kennedy School. As in Afghanistan, she was at first regarded with some suspicion by some classmates because of her involvement with the counterinsurgency effort and the military. But with time, those walls broke down.

“I really needed that new peer group,” LeGree says. “I wanted to surround myself with people who had done different things and who inspired me and who would have different viewpoints, and that’s what I got. I had an incredible class full of people who are friends for life and the people who really helped me start Ascend.”

One of those classmates was Sabreen Dogar MPA 2014, who is still a member of the Ascend board of directors. LeGree remembers being with Dogar in Adjunct Professor Carl Byers’s entrepreneurial finance class together—and struggling mightily: “We kind of hated it because we weren’t good at it, and it sucked to struggle while other people in the class were so good and had master’s degrees in finance.”

LeGree says that Byers really challenged her about her idea for Ascend, but the struggle ended up making both her and her idea stronger. “One of the assignments was that I had to sketch out what Ascend would look like in five years,” she says. “And we’re literally drawing on that playbook right now.” She says that Byers, who now teaches at the Harvard T.H. Chan School of Public Health, is still helping seven years later, posting on social media to urge support for Ascend after the Taliban takeover. “Both Sabreen and I have been like, ‘Oh my gosh, we’ve got our professor’s mark of approval,’” LeGree says. 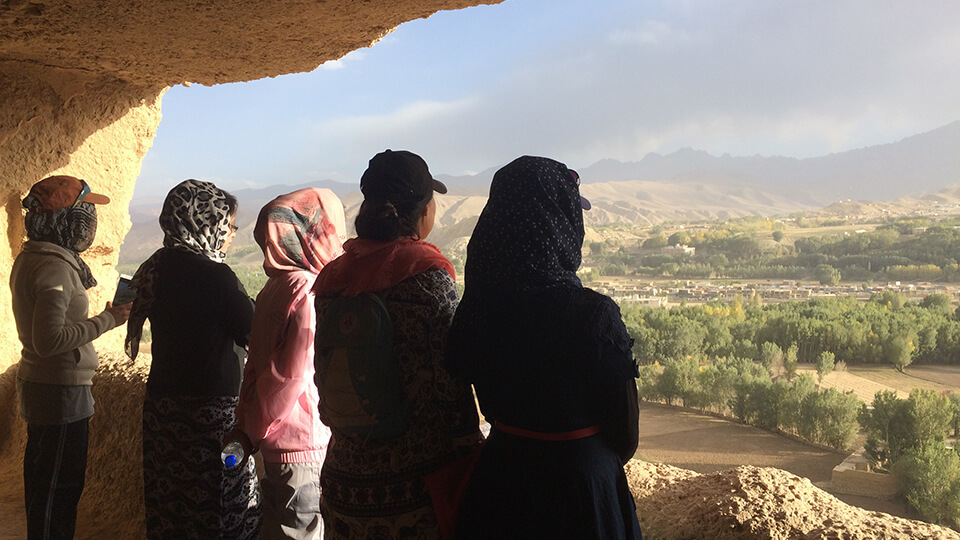 “No outsider can fix this for Afghans, and no society that disempowers half its population is going to succeed.”

After commencement, LeGree returned to Afghanistan and founded Ascend, bringing on the climbers Danika Gilbert and Emilie Drinkwater as guides and mentors. Over the next seven years, as the program grew, Ascend recruited more than 20 young women every year for the two-year program, which helped them develop skills including their leadership, service, physical fitness, psycho-social well-being, and mountaineering. In 2021, they scaled up, opening a new sports center and bringing on 75 participants.

The program was based in Kabul, but for climbing and outdoor training the girls were flown to the Wakhan, a narrow strip of Afghan territory bordered by Tajikistan to the north, Pakistan to the south, and China to the west. It is perhaps the most remote climbing destination in the world—so remote that both the Russians and Taliban had trouble gaining a toehold there. For the girls’ first major climb, they chose a 16,000 foot peak next to Mir Samir, a 19,000-foot peak that is so difficult it has never been successfully climbed and is considered by many to be unclimbable. When they established a base camp at 14,000 feet, local villagers informed them that no Afghan woman had ever reached that altitude before. As a tribute to their quest to overcome obstacles, the group named themselves “The Lion Daughters of Mir Samir.”

Thanks to the efforts of LeGree, Ascend staffers, and other allies, those young women and the other Ascend participants are now spread across the globe in Chile, New Zealand, Ireland, the United Arab Emirates, Pakistan, Germany, Denmark, and the United States. For now, LeGree says, the way forward for Ascend is to redirect its programming to serve those refugee populations where there is a critical mass.

The program in Afghanistan itself is still up in the air, she says. “We’re keeping our foothold there because the Taliban haven’t really said much about who’s going to be allowed to do what,” she says. “We can do female-only instruction in the space that we have, and we can also deliver instruction via cell phones—which we’ve gotten pretty good at during COVID anyway.” The mountaineering program will almost certainly need to be moved, with Pakistan being a strong possibility for its new location.

LeGree also plans to expand beyond serving only young women from Afghanistan. “It doesn’t have to be just Afghans,” she says. “The mission is to empower girls through sports. That can be applied in a lot of different ways.”