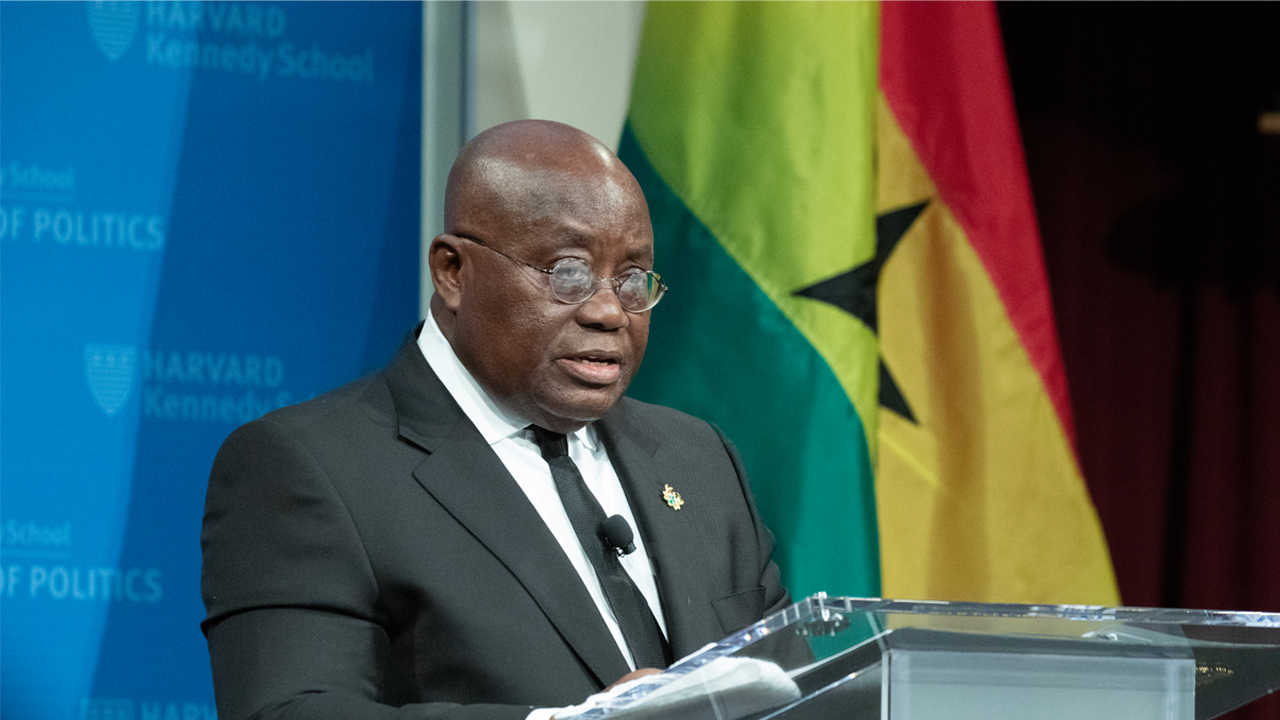 President Nana Akufo-Addo says the continent is “on the edge of a breakthrough” if governments can harness the power of Africa’s demographics.

Africa’s huge population of young people will either be a major advantage or a heavy burden, depending on whether African governments can come up with a “strategy to reap the demographic dividend,” President Nana Akufo-Addo of Ghana said last week in a speech at the John F. Kennedy Jr. Forum at Harvard Kennedy School.

“With over 40 percent of its working population between the ages of 15 and 24, Africa is the youngest continent in the world,” said Akufo-Addo, who gave the keynote address for Harvard’s yearly student-run Africa Development Conference. “This represents a staggering amount of human capital, and according to the African Economic Outlook, this number is set to double by 2045.”

Akufo-Addo is the fifth president of Ghana’s Fourth Republic, which was established in 1993 when the country’s military handed power to a democratically-elected civilian government. He said Africa’s economy is “on the edge of a breakthrough,” but only if there are “systematic investments” in human capital similar to those made in Asian countries that have become economic success stories such as South Korea, Japan, Singapore, and Malaysia.

Among other steps to “invest in empowerment education and employment” of young people, Akufo-Addo said lawmakers in Ghana are working on legislation to make kindergarten through high school education compulsory. In order to help young women, Ghana is also working toward achieving gender parity in university enrollment, he said.

As examples, he cited the large numbers of unemployed youth swept up into social unrest in the Middle East and North Africa in the wake of the Arab Spring, as well as the situation in northern Nigeria, where extremist groups including Boko Haram have found ample opportunities for recruitment.

The migration abroad of large numbers of African youth in recent years also shows the perils and promise of a young population, Akufo-Addo said.

“Young people are willing to risk everything to improve their circumstances,” he said. “We’ve seen in recent times, high numbers of them taking harrowing risks around the Sahara Desert and the Mediterranean trying to reach the mirage of a better life in Europe. What this means is that if we provide them the right environment in Africa, they will make our continent great.”

But preparing the continent for success, he said, also means creating jobs by moving African economies away from producing and exporting commodities to processing and other more complex industrial and manufacturing endeavors. As an example, he said that while Africa produces 65 percent of the world’s raw cocoa, it accounts for just 6 percent of the overall value chain.

“This means the farmers, whose efforts make possible the growth of this massive industry, receive a mere pittance for their labors,” he said. “This is not right. If we simply ground and sold the cocoa in paste form instead of selling the beans, we’d double our earnings.”

African countries, he said, must be prepared to face headwinds from industrialized nations who stand to lose out as his continent’s economies develop and mature.

“I understand there are nations who have built their industrial complexes around the value chain of our raw commodities. It is time to change that setup,” Akufo-Addo said, to applause from the crowd.

If African countries succeed, he said, they will have done something rare in world history—achieving industrialization in the context of democratic governance.

“It will enable us to build a new, progressive African civilization,” he said, “grounded on a system of governance that respects individual liberties and human rights, the rule of law, and the principles of democratic accountability.”

Akufo-Addo was introduced by Professor Emmanuel Akyeampong, the Oppenheimer Faculty Director for the Center for African Studies. Harvard is celebrating its 50th anniversary of the founding of the Department of African and African American Studies this year.

“I have a cause, a purpose, something to fight for”: Former Colombian President Juan Manuel Santos MPA 1981 on leadership and life lessons

“I am going to do something about this”: Rhode Island Governor Gina Raimondo on the call to public service and leadership’s hard choices