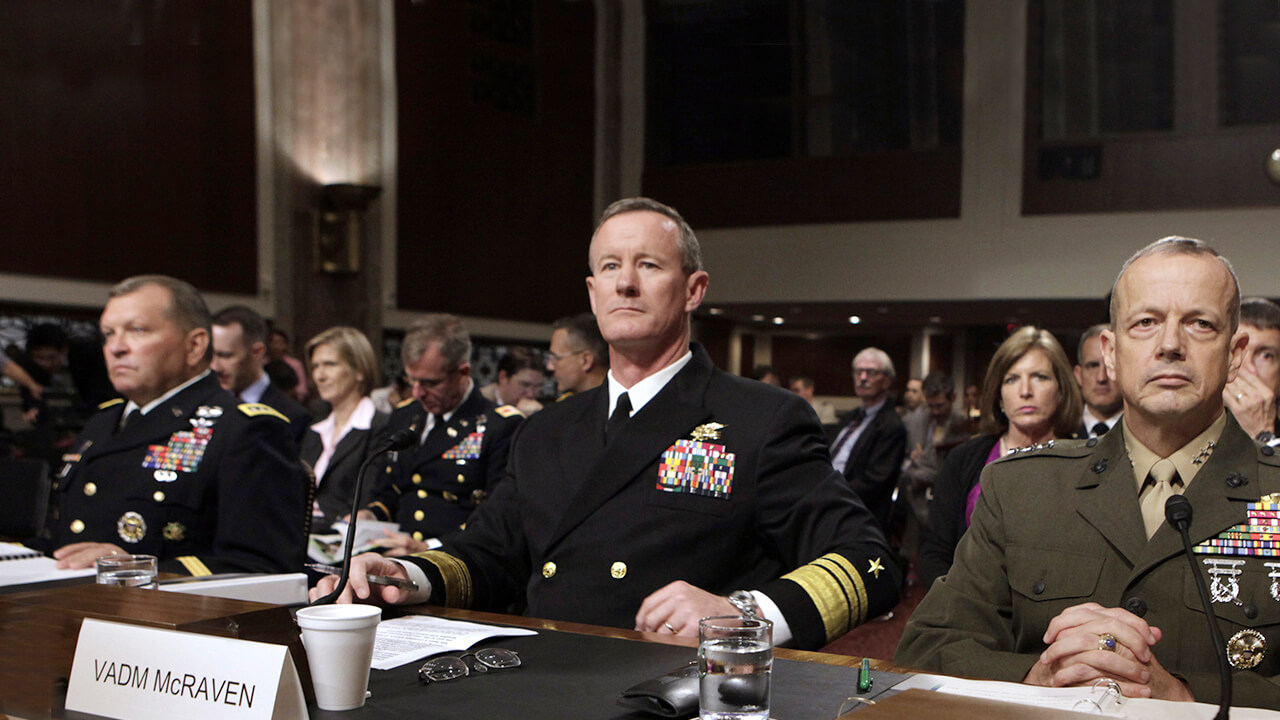 Four-star Admiral Bill McRaven, former commander of the U.S. Special Operations and Navy SEAL, has led a high-profile career—including facing Somali pirates, Osama Bin Laden, and his own commander in chief. A natural storyteller, he shared highlights from his high-profile career at a John F. Kennedy Jr. Forum last week. The conversation was moderated by Dana H. Born, faculty chair of Harvard Kennedy School’s Senior Executive Fellows Program, a lecturer in public policy, and a retired Brigadier General with 30 years of USAF service.

The Capture of Osama Bin Laden

McRaven was in Afghanistan commanding the mission to bring in Osama Bin Laden. But the story he likes to tell is of his unique gift from President Obama. Once the military retrieved Bin Laden’s body, McRaven needed to confirm his identity. In addition to facial recognition, McRaven knew Bin Laden was a tall man, six-foot-four inches. McRaven found a six-foot-two-inch tall soldier and had him lay next to Bin Laden’s remains. And in fact, the body was two inches taller. McRaven reported to the president that DNA analysis would be needed but based on his physical inspection, including the side-by-side height comparison, he was sure they had got their man. “Let me get this straight,” McRaven remembers the president asking. “‘You said we had $65 million for a helicopter, but you didn't have $10 for a tape measure?’ And I remember it was just the right thing to say at the right moment to bring down the stress and anxiety.” Later when McRaven visited Obama at the Oval Office, the president said he had something for him. “The president pulls out this plaque,” McRaven explains. “And on the plaque is a tape measure.”

But it was another battle that recently had McRaven in the national spotlight. He has spoken publicly in the last few years against former President Trump, including through op-eds in The Washington Post and The New York Times. In 2020, he wrote, “As Americans, we should be frightened—deeply afraid for the future of the nation. When good men and women can’t speak the truth, when facts are inconvenient, when integrity and character no longer matter, when presidential ego and self-preservation are more important than national security—then there is nothing left to stop the triumph of evil."  While McRaven has been criticized for these opinions, he is fine with that. “There’s an unwritten rule that senior flag officers don't speak out against the president of the United States,” he said. “And that is a good rule. I violated that rule. I violated that rule because I've got to wake up and look myself in the mirror and decide whether or not I think I'm doing the right thing. But then you can't be surprised when you have to have to suffer the slings and arrows as people criticize you for it. I'm okay with that because I think it was more important to make my point. I tried only to make it when I felt that there was something was profoundly wrong.”

“I am reinvigorated by the young men and women that are looking to go in the public service.”

It is where leadership and storytelling intersect that perhaps gave McRaven his biggest spotlight. In 2017, he published one of his commencement speeches as a book, “Make Your Bed: Little Things That Can Change Your Life…And Maybe the World.” It instantly became a hit, and as Harvard College student Ryan Tierney said in his introduction, a much-gifted graduation present. The response to that book and McRaven’s leadership as chancellor of the University of Texas system gives him hope for our future. “I think what most Americans have found that there are so many other great leaders we can look to,” he said. “You do need to look to the top, but when that doesn't work for you, then all you have to do is look to your left and your right, and you're going to find great leaders. You're going to find great teachers that are remarkable leaders. You're going to find healthcare professionals. You're going to find soldiers.”

“I am actually more optimistic now than I've been in a long time,” McRaven said. “And the reason I am is because I'm the biggest fan of the millennials and the Gen Z you'll ever meet. I am reinvigorated by the young men and women that are looking to go in the public service. So anybody out there that thinks America is on the decline or that we don't have a great group of young men and women coming up, boy, you're not looking in the same place as I am.”

Life Lessons from a Warrior and Storyteller: Admiral Bill McRaven