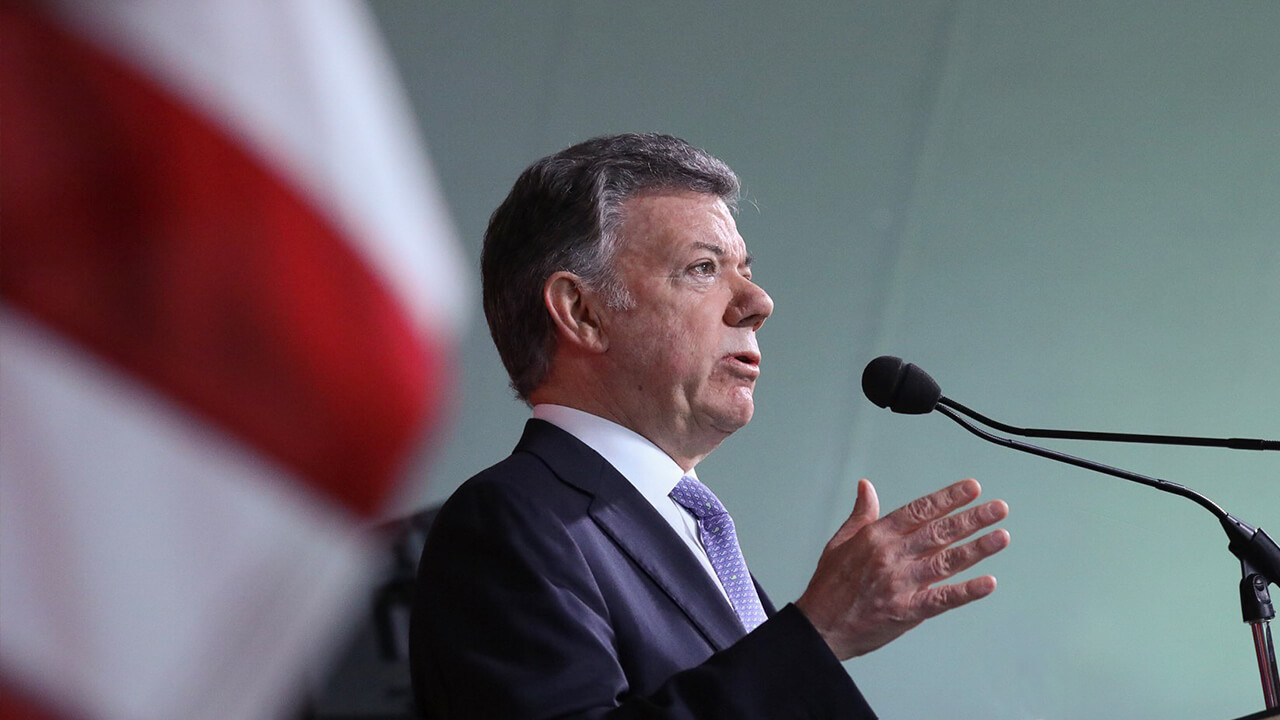 The former president of Colombia and Nobel Peace Prize laureate urged graduates to “lead with a compassionate heart and a positive mind.”

Juan Manuel Santos MC/MPA 1981, former president of Colombia and Nobel Peace Prize laureate, delivered the graduation address to the Harvard Kennedy School on Wednesday, challenging members of the Class of 2019 “to lead with hope, not fear.”

Santos, who was president from 2010 to 2018, received the Nobel Peace Prize in 2016 for his efforts in ending a decades-long civil war. Reflecting on his own unexpected career, and his work to end the guerilla conflict and bring peace to Colombia, he encouraged the 582 graduating Kennedy School students to be “prepared and open-minded” as they embark upon their futures.

While Santos commented on a number of grave public policy challenges facing the world—especially the repercussions of global climate change—he remained optimistic about the future and encouraged graduates to become responsible public leaders. “I believe in this generation of extraordinary men and women because you are not motivated by hate and prejudice,” Santos said. “You are prepared to question old ideologies and old methods, to open your hearts—open your minds—to new possibilities. Otherwise, you wouldn’t be here.”

Harvard Kennedy School Dean Douglas Elmendorf, who introduced Santos, said, “President Santos is a principled and effective public servant, the sort of person that we hope all the members of the Class of 2019 will go on to be in their lives and careers. He has made such a positive difference in the lives of millions of Colombians.”

Santos—who spent the past year on campus as an Angelopoulos Global Public Leaders Fellow—reflected on his time as a student in the Class of 1981. He recalled that the lessons he learned at the Kennedy School gave him the tools that he needed to improve social and economic conditions in Colombia and to work to end the country’s civil war.

The Nobel laureate concluded his address, which took place in John F. Kennedy Memorial Park, by calling for empathy and hope. “If you lead with a compassionate heart and a positive mind,” he told the graduates, “you will make the world a better place.”

On May 30, the Harvard Kennedy School Class of 2019 will take part in University-wide Commencement activities in Harvard Yard and the Kennedy School diploma ceremony in John F. Kennedy Memorial Park.