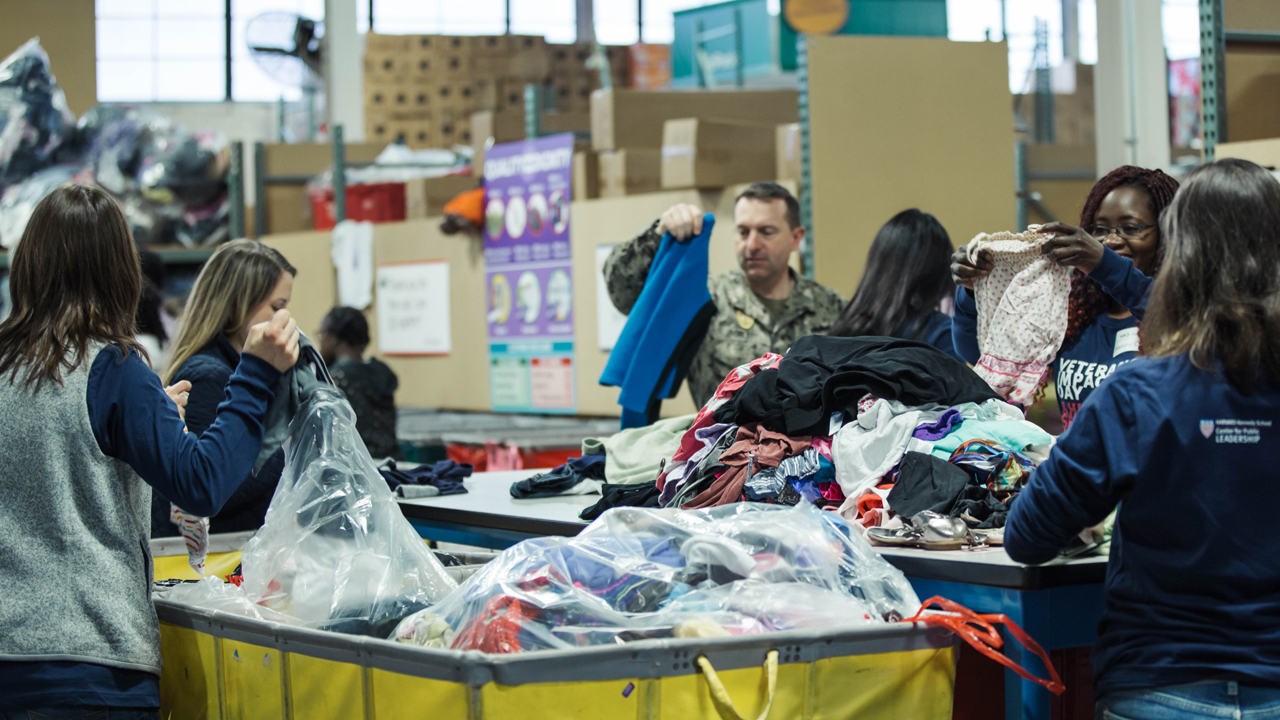 Students from Harvard Kennedy School’s military community and their civilian counterparts came together for a day of outreach to aid homeless shelters and other community projects.

On Friday, the student military organization and the Student Public Service Collaborative joined forces for the first time to combine their days of service outreach. And in the process, they engaged and supported each other in ways designed to help bridge the nation’s military-civilian divide.

The volunteers fanned out to nine service sites—paired up in buddy teams, with one civilian and one military student working together throughout the day. Organizers encouraged the students to trade ideas and observations about military life and civilian perspectives in a country that has gone through 17 years of continuous war.

Ambassador Wendy R. Sherman, former under secretary of state for political affairs and director of the Kennedy School’s Center for Public Leadership, welcomed about 120 students as they gathered for the combined day of service. She told them: “This is part of what we do to make sure we reach out to the community, that we are not the one percent for the one percent, that we communicate with each other—that civilians and the military respect, understand and appreciate that the way we ensure the peace and security of the country and our communities is when we work together.”

Harvard University President Larry Bacow recalled his own arrival at the Kennedy School in 1972 as an MPP student (and the youngest member of his graduate school class). “We came here because we were inspired by the call to service by the president for whom the institution is named,” Bacow said. “That call to service still resonates today.”

He reminded the service volunteers of Harvard’s deep ties to the military. His own office in Massachusetts Hall housed General George Washington and his troops during the Revolutionary War, and his official residence on Brattle Street was a military hospital serving the American troops. No university other than West Point has produced more Medal of Honor winners—eighteen. “Harvard’s history is America’s history. And Harvard’s history is to a large extent the military’s history,” Bacow said.

Bacow applauded the students’ service, whether civilian or military: “In the Talmud, the Tikkun Olam says it is the responsibility of every person to repair the world. The only way it gets better is if good people work together to make it better. It is our responsibility as citizens, and it’s also what it means to be a citizen of Harvard. You are all modeling that behavior today.”

Ash Carter, director of the Belfer Center for Science and International Affairs and former U.S. secretary of defense, alluded to the challenges and contradictions in a society with an all-volunteer military that sometimes feels disconnected from civilian society.

“As far into the future as I can see, the few will defend the many,” Carter said. “The best way to link the few to the many is calm, logical dialogue and mutual understanding. Every opportunity you have to do that is a win for both sides. Today is what that is about.”

Sherman noted that a recent $7.5 million gift from the Debra and Leon Black Family Foundation will significantly expand opportunities for active-duty military members and veterans to attend HKS, the Law School and the Business School. She said the initial support for CPL to foster the military-civilian partnership had come from the Kenan Charitable Trust, which sparked the launch of the Veterans Impact Day.

Ralph N. Grossmann MPP 2020, an active-duty U.S. Navy lieutenant, said, “A day like this is very important because it allows people who haven’t been in the military to experience the military community and culture, our teamwork and our sense of community, and how we take care of each other. Whether we are active duty or civilian students, taking care of veterans is important to us. And it’s important to America.”

Among the most promising leaders of a rising generation: At Harvard Kennedy School, members of the active duty military and veterans gain and contribute in unique ways