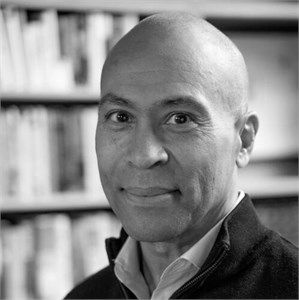 Deval Patrick is a professor of practice and co-director of the Center for Public Leadership at the Harvard Kennedy School.

Originally from the South Side of Chicago, Patrick attended Milton Academy, thanks to the organization A Better Chance, and then Harvard College and Harvard Law School. Between college and law school, he lived and worked in East and West Africa. After law school, he clerked for a federal appellate judge and then launched a career as an attorney and business executive, becoming a staff attorney at the NAACP Legal Defense Fund, Assistant Attorney General for Civil Rights in the Clinton administration, a partner at two Boston law firms, and a senior executive at two Fortune 50 companies.

From 2006 to 2015, he served as the governor of Massachusetts, the first Black person to serve in the role.

During his two terms, Patrick focused on health care, public schools and public infrastructure, and launched initiatives stimulating clean energy and biotechnology. Under his leadership, Massachusetts ranked first in the nation in student achievement, energy efficiency, health care coverage, veterans’ services, and entrepreneurship, and emerged from recession to achieve a 25-year high in employment.

After his time in public office, Patrick founded and led an impact investment fund, the first fund in a major financial institution to focus on delivering both superior financial return and significant positive social impact. He continues to invest in mission driven business as an advisor and board member.

Patrick is a Rockefeller Fellow, a Crown Fellow of the Aspen Institute, and the author of two books, A Reason to Believe: Lessons from an Improbable Life and Faith in the Dream: A Call to the Nation to Reclaim American Values.  He divides his time between Cambridge and Western Massachusetts.

Principles and Politics When Running for Office

Outside Professional Activities For Deval Patrick