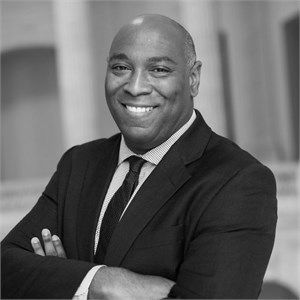 Roscoe Jones, Jr. is an adjunct lecturer of public policy who has 15 years of experience working in all three branches of the federal government.  He is currently a counsel[1] in the Washington, D.C. office of Gibson Dunn & Crutcher LLP where he brings helps clients navigate complex public policy matters and difficult crises often involving congressional, executive branch, and internal investigations.

On the federal judiciary, he clerked for Judge Carl E. Stewart on the U.S. Court of Appeals for the Fifth Circuit and Judge Alexander Williams, Jr. (ret.) on the U.S. District Court for the District of Maryland.

He received his A.B. in history and political science, with high honors, from Stanford University and his J.D. from the University of Virginia Law School, where he was editor-in-chief of the Journal of Social Policy & Law and co-founder of the Law School’s Center for Race & Law.

[1] Admitted to practice in Maryland; not admitted in the District of Columbia.  Practicing under the supervision of Principals of the Firm.