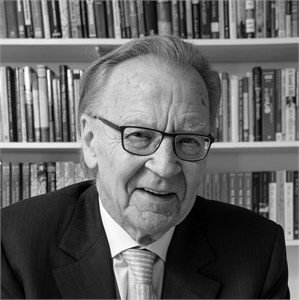 Thomas E. Patterson is Bradlee Professor of Government and the Press. In the past, he has authored three books, Informing the News: The Need for Knowledge-Based Journalism; How America Lost Its Mind: The Assault on Reason That's Crippling Our Democracy, and Is the Republican Party Destroying Itself?. An earlier book, The Vanishing Voter, examined electoral participation, and his book on the media’s political role, Out of Order, received the American Political Science Association’s Graber Award as the best book of the decade in political communication. His first book, The Unseeing Eye, was named by the American Association for Public Opinion Research as one of the 50 most influential books on public opinion in the past half century. He is also the author of Mass Media Election: How Americans Choose Their President (1980), and an introductory American government text We the People, which is now in its 14th edition.. His articles have appeared in Political Communication, Journal of Communication, Public Opinion Quarterly, and other academic journals, as well as in the popular press. His research has been funded by the Ford, Markle, Smith-Richardson, Pew, Knight, Carnegie, and National Science foundations. Patterson received his PhD from the University of Minnesota in 1971.

Who Governs? Power in America

Outside Professional Activities For Thomas Patterson