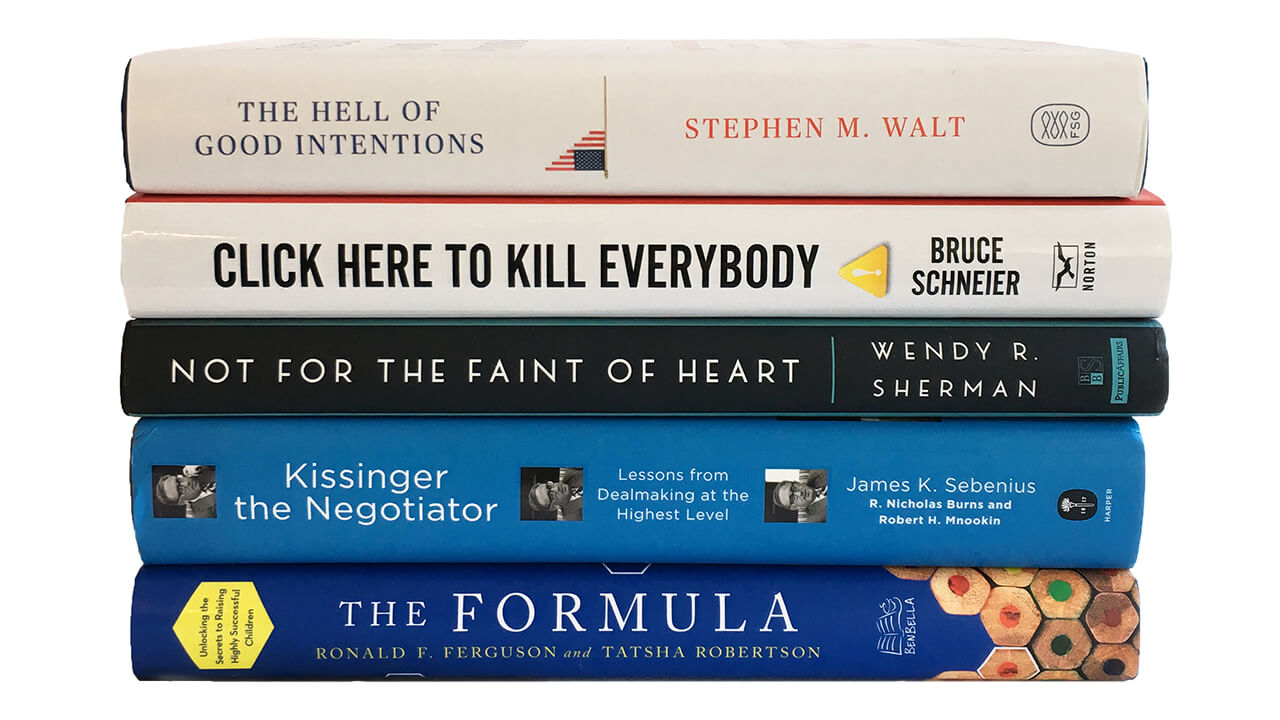 The Hell of Good Intentions: America’s Foreign Policy Elite and the Decline of U.S. Primacy 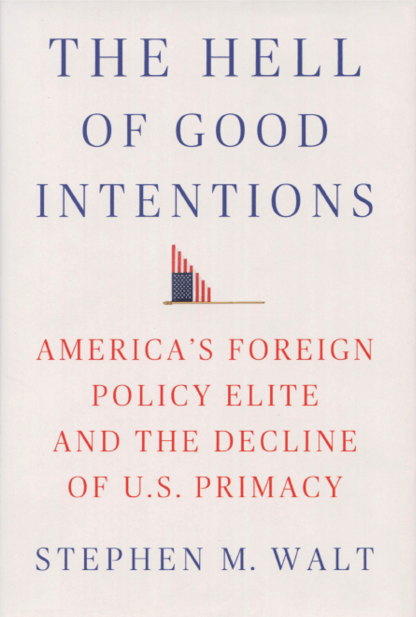 The past four U.S. presidential administrations, from Clinton to Trump, seemingly have little in common. Yet Stephen Walt points to one characteristic they all share: a failure of foreign policy. In his book, he outlines why over the past 25 years disparate administrations have made similar mistakes overseas and how to shift course to make other countries and the United States more secure.

He dubs the recent foreign policy strategy “liberal hegemony,” which he defines as the belief that America is uniquely qualified to spread principles of individual freedom, democratic governance, and a market-based economy. That may sound like something to aspire to, but Walt contends that its execution has led to poor relations with Russia, quagmires in Afghanistan and Iraq, and resistance across the world. Liberal hegemony has failed, he writes, because of a “distorted understanding of international politics,” with both foes and allies alarmed by America’s dominance. At the same time, America’s military power could not exert control over other, weaker countries.

The strategy persevered despite the “dismal record,” according to Walt, because of an entrenched foreign policy establishment with little accountability and motivated by vested interests to pursue an ambitious global agenda. That foreign policy establishment uniformly denounced Donald Trump, who won in part, Walt argues, for appearing to promise a different direction for foreign engagement. That promise has proved illusory, he writes, because the Trump administration has combined the worst tendencies of liberal hegemony with incompetence.

The book ends by proposing an alternative approach. Walt advocates for “offshore balancing,” which he calls “America’s traditional grand strategy.” It focuses, he writes, “on preventing other states from projecting power in ways that might threaten the United States.” The strategy is not isolationist, he emphasizes, but would work to maintain regional balances of power and would prioritize local forces as a first line of defense. It is a realistic strategy that served the country well in the past, he asserts, and would do so again in the future.

Click Here to Kill Everybody: Security and Survival in a Hyper-connected World 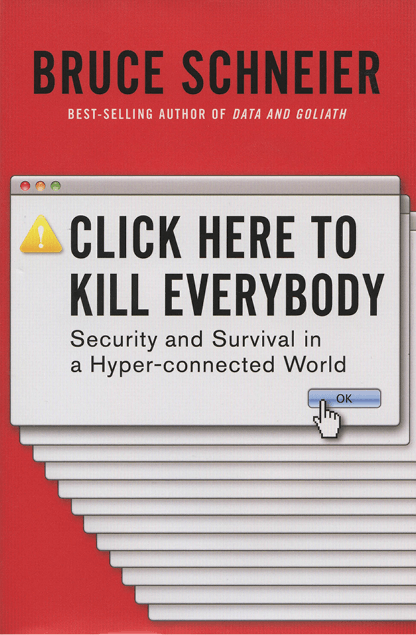 The security expert Bruce Schneier shows the insecurities that have arisen in a world pervaded by internet-connected computers—and how to address the problem before catastrophe strikes. As he notes in the first part of the book, which provides an overview of the current state of computer security, computers are no longer distinct devices but have become central to everyday objects like cars and appliances and can even be connected to our bodies through medical equipment such as pacemakers and insulin pumps. The complexity of these systems makes them more vulnerable to attack, he says, as does the fact that the systems are interacting with one another. In addition, he argues, insecurity enables governments in conducting law enforcement and espionage and corporations in facilitating profit. The risks of this current state include attacks against industrial power sources, supply chains, transportation, and financial trading systems.

Although Schneier says that security risks are getting worse, he offers remedies to help mitigate them. He presents a list of design principles with which vendors can improve the security of devices, ranging from providing greater transparency on how their security works to allowing researchers to study their products for vulnerabilities. His main focus, however, is on government intervention. Contending that liability is currently lacking for insecure products, he calls for fines against companies after a security breach or as a penalty for insecure practices. He also proposes a new federal agency that could manage government-wide cybersecurity issues, and he offers several provisions for government to prioritize offense over defense, including disclosing vulnerabilities and encrypting as much of the internet as possible. But improvements can occur only if technologists and policymakers work together, he writes: “We need laws and policies that address the threats and the economics and the psychology properly, and won’t become obsolete with changing technologies.”

Not for the Faint of Heart: Lessons in Courage, Power & Persistence

Weaving together stories of her life and career—not only as undersecretary of state for political affairs but as a national campaign manager, social worker, and advocate—against the tense negotiating backdrop of the historic Iran nuclear deal, Wendy Sherman elevates the leadership values that shape personal and professional success. The stories begin with an early lesson in courage from her father, who, with her mother, risked financial ruin to run his business with integrity in civil rights-era Baltimore, and move to high-stakes negotiations with North Korea, Cuba, in the Middle East, and with a cast of international diplomatic actors.

Throughout, Sherman relays lessons learned, some deeply personal, others professional, from those closest to her. Among them, her one-time boss, former Secretary of State Madeleine Albright: “Madeleine told me the trick is not to simply wield your personal power, but to own the power of your office. ‘You are the United States of America at the negotiating table, not Wendy’. This isn’t just true for ambassadors and cabinet secretaries. We all draw power from the roles we fill in life.”

Sherman unpacks how we bank power, get comfortable with it, and decide when to use it. She pays particular attention to the relationship women have with power, persistence, and ultimately, embracing success. Chronicling the complexities of reaching the Joint Comprehensive Plan of Action between the P5+1, the EU, and Iran on July 14, 2015—for which Sherman led the U.S. negotiating team—she writes, “The day impressed on me the importance of acknowledging our successes. I am ambivalent about success because it is so often incomplete, but we have to embrace and own them. There’s a humility in even claiming them.”

Kissinger the Negotiator: Lessons from Dealmaking at the Highest 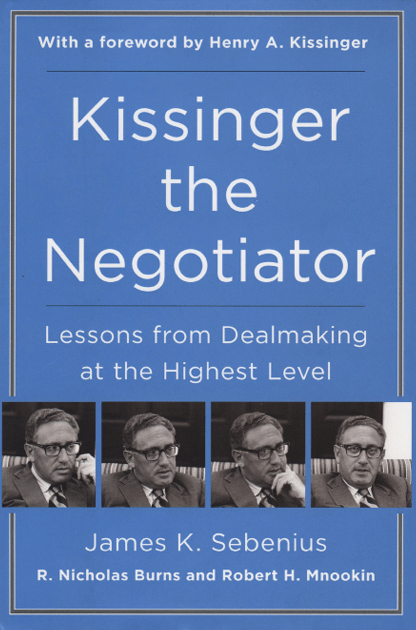 Drawing from extensive interviews with Henry Kissinger, professors from three Harvard schools examine the former secretary of state’s public and private dealmaking and the lessons it provides to negotiators. In a foreword, Kissinger calls the book the first of the many on him and his career to focus on his philosophies and methods of negotiation, as the authors assess how he approached such challenges as the war in Vietnam, hostile relations between the United States and China, and the Arab-Israeli war.

The authors begin with a lesser-known initiative in 1976, when Kissinger worked with southern African states to persuade the white-minority government of Rhodesia to accept majority rule. According to them, it demonstrated many of the skills that he brought to other negotiations, such as building multiparty coalitions, focusing on the motivations of counterparts, and building relationships with them. Similarly, in seeking to normalize relations with China, Kissinger chose other countries to assist with establishing communication and studied Chinese leaders to understand how best to interact with them.

These examples point to a key lesson from Kissinger, according to the authors: his practice of “zooming out” to larger strategic goals while also “zooming in” by using interpersonal skills to persuade counterparts. Other lessons they outline include continually reevaluating assumptions about the deal you seek to achieve and taking the long view; they quote Kissinger as seeking to “create incentives or pressures in one part of the world to influence events in another.” And sometimes, they add, simply dogged persistence can lead to success, such as with the 26 trips Kissinger took between Tel Aviv and Damascus to forge an Israeli-Syrian disengagement agreement. Although the world has changed drastically from the Cold War era in which Kissinger served in government, these lessons still apply, the authors contend, and would also be useful for those in business or law.

The Formula: Unlocking the Secrets to Raising Highly Successful Children 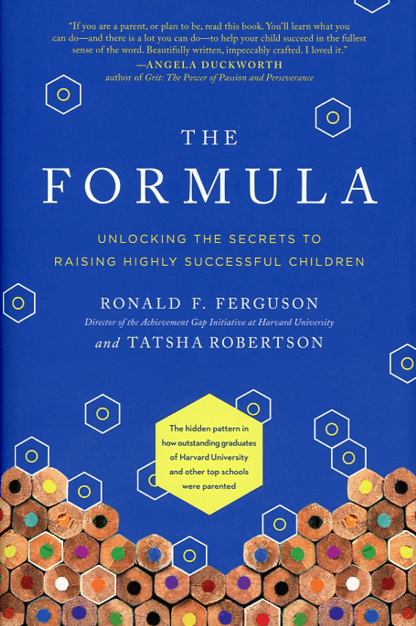 Throughout his 35 years at Harvard, Ronald Ferguson often wondered what parents might have contributed, beyond genes, to how his students grew so smart. Tatsha Robertson, his coauthor, wondered the same thing about the many outstanding people she encountered as a journalist for top-tier publications. After starting their detective work independently, they teamed up in 2014. Their new book reveals the intriguing pattern they uncovered.

Together, they interviewed dozens of brilliant adults (about half were Harvard graduates) and their parents. No matter what a family’s race or income level, the same eight principles (framed as roles) emerged from the stories. The “early learning partner” got the preschooler hooked on learning and problem solving, producing the “early lead effect” in kindergarten. The “flight engineer” monitored, making sure school kept the child’s journey on a high trajectory. The “fixer” sacrificed to keep important doors to opportunity open. The “revealer” exposed the child to life’s possibilities. The “philosopher” engaged the child in deep, meaningful conversation. The “model” inspired emulation. The “negotiator” taught self-advocacy and strategic behavior. Finally, the “GPS navigational voice” remained as the parent’s voice in the child’s head, still coaching, after the child left home.

The book addresses the meaning of success, parent motivation, sibling dynamics, and how high achievers respond to hurdles. Mainly, it interweaves the life stories of high achievers to reveal the eight roles that parents can play to launch their children on a journey to self-realization.