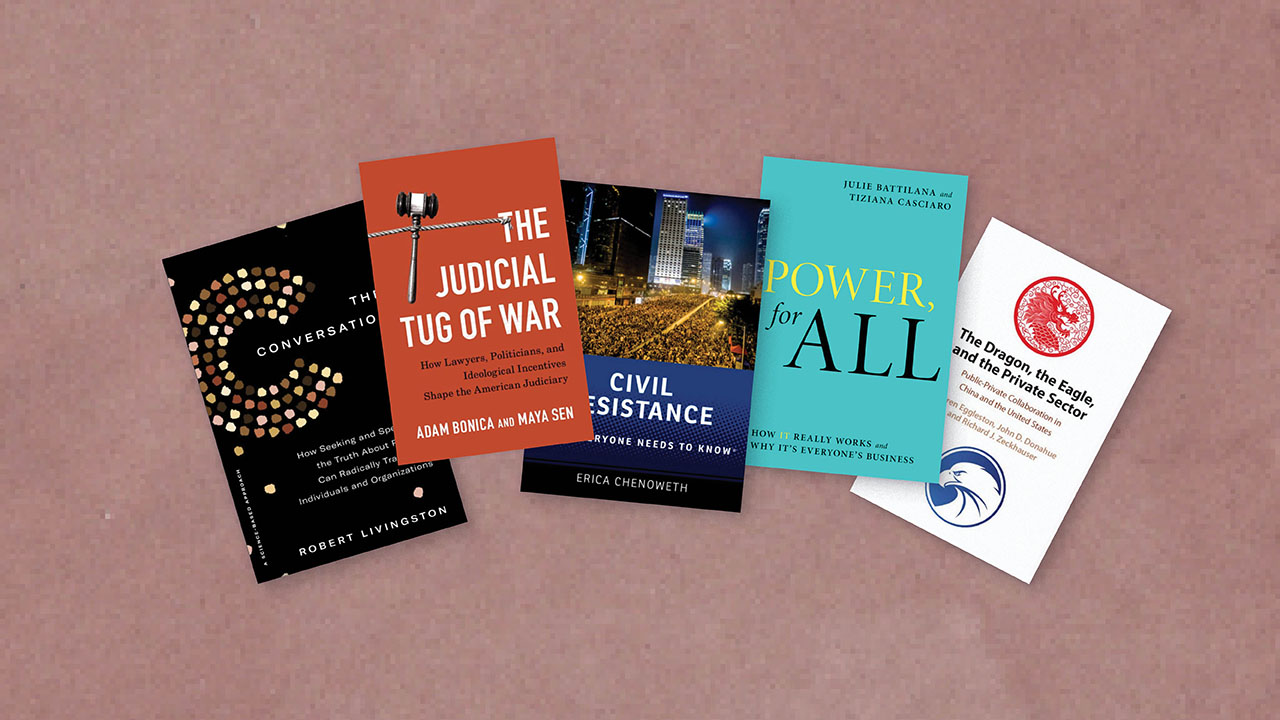 Civil Resistance: What Everyone Needs to Know 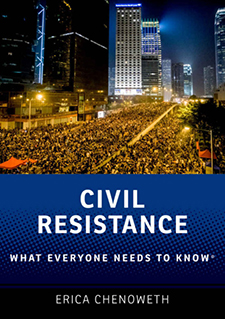 ERICA CHENOWETH HAS EMPIRICALLY assessed historical and contemporary mass resistance movements, focusing on the unexpected efficacy of nonviolent campaigns since the mid-2000s. On the basis of firsthand research and lessons learned from activists around the world, in Civil Resistance: What Everyone Needs to Know, Chenoweth synthesizes the robust yet disparate scholarship on civil resistance to make it more accessible for practical use.

Chenoweth describes civil resistance as a form of struggle in which unarmed civilians—often those most marginalized in a given society—actively confront an opponent through nonviolent tactics like protests, boycotts, and other methods of economic, social, and political disobedience. Through deliberate application of these methods, participants can exert pressure on society’s traditional power-holders to achieve goals of collective benefit. Chenoweth doesn’t necessarily assign moral weight to nonviolent techniques over violent ones but finds that civil resistance movements throughout the 20th century ultimately succeeded at almost double the rate of armed uprisings and with far fewer fatalities along the way—even when the state responded to them with violent force. This success, according to Chenoweth, can be attributed to civil resistance’s ability to elicit broad and diverse participation, create defections within elite circles including security forces, wield a wide array of tactics, and maintain discipline to deter the escalation of state violence.

Importantly, though, the data also show that over the past 10 years, the success rate of resistance movements has begun to decline. Chenoweth attributes this decline to adaptations in both movement strategy and state repression in the digital age. As a result, recent pro-democratic movements have tended to be smaller than those in previous decades, while autocrats have learned how to mobilize their own constituents to defend the status quo.

With Civil Resistance: What Everyone Needs to Know, Chenoweth has contributed an invaluable resource to the growing catalog of educational tools available to activists worldwide.

The Conversation: How Seeking and Speaking the Truth About Racism Can Radically Transform Individuals and Organizations 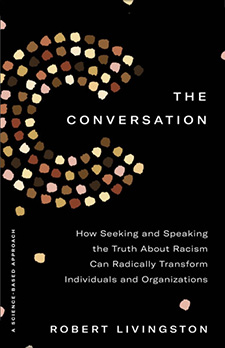 AN EXPERT IN DIVERSITY LEADERSHIP and training, Lecturer in Public Policy Robert Livingston has a new book that he describes as “a road map and compass for our shared journey toward a more racially just and equitable destination.” Less a theoretical treatise and more a practical tool, its goal is to help individuals and organizations “collectively make progress toward solving the perennial problem of racism—particularly as it relates to anti-Black racism in the United States.”

Using research insights from the fields of psychology and management studies—and peppering his narrative with engaging examples from his own teaching experience—Livingston explores why racism persists and how it can be overcome. At the heart of the book is the concept behind the title: Livingston writes, “What I refer to as The Conversation (capital T, capital C) is a candid sharing of perspectives on race—grounded in facts—that leads to greater awareness, empathy, and action.”

Livingston structures The Conversation using his PRESS model (Problem awareness, Root-cause analysis, Empathy, Strategy, Sacrifice), guiding the reader methodically and interspersing chapters with sections he calls “Forums,” which include questions for reflection and are designed as springboards for community discussion.

While systemic racism can feel like an intractable problem, The Conversation tackles the issue with evidence-based optimism and serves as a practical guide to help individuals and organizations make meaningful change.

The Judicial Tug of War: How Lawyers, Politicians, and Ideological Incentives Shape the American Judiciary 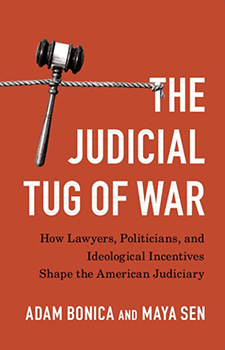 HARVARD KENNEDY SCHOOL PROFESSOR Maya Sen and a colleague from Stanford, Adam Bonica, lay out a compelling case for how and why America’s courts are subject to a political struggle in which both lawyers and political elites hold power. “The relationship between conservative and liberal politicians and the legal establishment establishes the basic tug of war that frames this book,” Sen and Bonica explain.

Over the course of The Judicial Tug of War, Sen and Bonica examine the political power of lawyers and judges, explain tensions between political elites and the American bar, and present the consequences of this struggle and “what it means for the judiciary to be a political prize.” Drawing on rich data, they make a case that politics and ideology have the power to influence the American judiciary, whether we like it or not.

The implications of their argument are stark. As Sen and Bonica note, “Recent years have seen American courts issue rulings on some of the most politically charged controversies of the day, including campaign finance, affirmative action, health care reform, and same-sex marriage. Underlying these tensions are even more fundamental questions. Should we trust that judges are nonpartisan arbiters of the law? Are members of the judiciary insulated from partisan and political considerations?” The answers to these questions, Sen and Bonica imply, may not be reassuring.

The Dragon, the Eagle, and the Private Sector Public-Private Collaboration in China and the United States 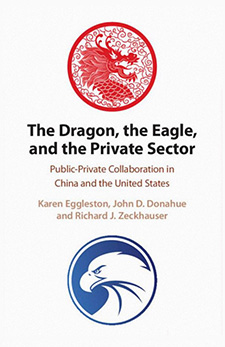 THE UNITED STATES AND CHINA—the eagle and the dragon of the title—appear poised to lead the world for the foreseeable future. Their differences are striking: One is the traditional superpower and champion of democracy and the free market; the other a single-party nation blending state-planning and capitalism to fuel its spectacular growth. But both have shown themselves to be eminently pragmatic in embracing public- and private-sector collaboration to help grow their respective countries and “accomplish some of each society’s most vital collective purposes.” The authors’ goals are twofold. First, to help decision makers understand collaborative governance. Or, as the authors put it, “to equip public leaders in China and the United States, and any other pragmatic public servants, to engage their private counterparts in ways that foster public value.” Second, to examine the evolution of those collaborations across five policy domains: rail transportation, real estate development, the Olympics, education, and health care. However, “collaboration should never be the goal in and of itself,” the authors write. “The central objective of government, and of public policy more generally, should be the creation of public value. … In China as in the United States, wise and patriotic public officials are experimenting with ways of engaging the private sector to do better by the people than the government could do on its own. The concepts, principles, tools, and examples offered here have one goal: to aid the noble and necessary work of creating public value.”

Power, for All: How It Really Works and Why It’s Everyone’s Business 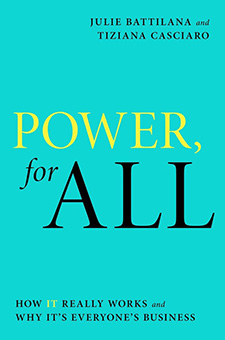 PART USER’S MANUAL, part manifesto for a more just world, this book is for everyone, because power is for everyone. That is the main thesis of coauthors Julie Battilana and Tiziana Casciaro. So, rather than nailing this book to the doors of corporate offices, political institutions, and wherever else power may be hoarded and jealously guarded, they prefer instead to explain power: how people misunderstand it, how most assume it is beyond their reach, and how they can, step by step, use it to change their own, and the broader, world.

Power is often misunderstood and reviled as something available only to a chosen few (and often abused). But Battilana and Casciaro’s careful study allows them to help the reader appreciate how power can be demystified, be within reach of everyone, and be used with empathy and humility. Through a variety of case studies, ranging from Canadian social entrepreneurs to doctors in the poorest neighborhoods of Rio de Janeiro, they show how the careful study of power dynamics and the application of some simple rules can help anyone bring about the change they want. What is at stake in democratizing power is nothing less than our future as humanity, the authors write: “If we are to survive and thrive as a species, living in harmony with each other and our environment, we must continue the work of previous generations who fought for power to be more fairly distributed.”