Brad DeWees PhD 2019, a major in the Air Force, says the best leaders are the ones who can best shape the decision making environment. 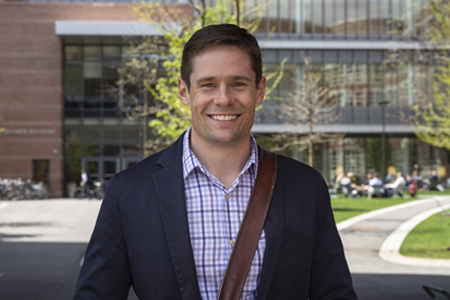 The popular notion of a good leader is that of a person who makes the right decisions. Brad DeWees PhD 2019 believes the best leaders are the ones who ensure decisions are made the right way.

“Leaders aren’t just visionaries, they aren’t just motivators—they’re decision architects,” says DeWees, who studies the science of judgment and decision making under uncertainty, especially in the context of national security. “That means they implicitly or explicitly shape the decision environment for the people that work underneath them. It’s about focusing on the process people use to get to a decision—whether that process is rigorous and whether it’s based on objective, quantifiable data—rather than just on the outcome of a decision and whether it turned out well.”

Due to the stakes involved in military judgments, decision science is an area of great interest to the armed forces, says DeWees, a U.S. Air Force major who came to Harvard Kennedy School as part of a program that sends a select group of high-achieving young officers to earn doctorates at leading universities.

“The Air Force has recognized that the environment we operate in is incredibly complex, and getting more complex every day,” he says. “And the things that have worked in the past aren’t necessarily going to be the things that work in the future.”

“I just fell in love with the work. Lerner has done a lot of work on the role of emotion in decision making, and the idea that specific emotions like anger, fear, and sadness have predictable effects on the way we perceive the world and the decisions that we ultimately make,” he says. “It just struck me as incredibly interesting from a knowledge perspective alone. The inner nerd in me was really blown away.”

The Air Force has recognized that the environment we operate in is incredibly complex, and getting more complex every day. And the things that have worked in the past aren’t necessarily going to be the things that work in the future.

In one study, Lerner and DeWees uncovered an important nuance in the way that accountability—the expectation that a person will have to justify their choice—makes decision makers more averse to ambiguous situations. Previous studies had shown a general correlation between accountability and increased aversion to ambiguity. But DeWees and Lerner found that in situations where decision makers have a high degree of knowledge about the subject matter, accountability actually made them less averse to ambiguity. This research was awarded the Howard Raiffa Dissertation Prize by the Harvard-MIT Program on Negotiation for best paper of the year on the topics of competitive decision making, strategic interaction, and negotiation.

And Minson and DeWees co-authored a study on the social implications of utilizing the wisdom of crowds. Studies have shown that the successful combination of multiple, independent judgments is often more accurate than even an expert’s individual judgment, but that independent judgments come with a social catch. Making a judgment of one’s own before evaluating another leads people to think less of other’s contributions and ideas. In an article for Harvard Business Review, Minson and DeWees outlined a number of strategies for avoiding this social cost while combining multiple judgments, including appointing an impartial aggregator who had not yet formed a personal opinion on the issue.

DeWees has completed his PhD studies in just three years rather than the typical five or six, which is par for the course for the New Mexico native, who has been a consistent high achiever since finding his calling in the Air Force. But he wasn’t always so motivated: Neither of his parents attended university, and during his senior year in high school he found himself “overwhelmed” by the college application process, he says. Though he says he had no burning desire to serve in the military, the Air Force Academy in neighboring Colorado appealed both because it was relatively close to home and because it required no up-front tuition (cadets are required to serve five years in the Air Force in return for their education).

“I really didn’t know what I was getting into,” DeWees says. But something about the mental, emotional, and physical intensity of military academy clicked with something inside him. “I just found myself thriving in that environment.”

He graduated first in his class in 2009, and went on to earn a master’s in international security and economic policy from the University of Maryland. Entering active service, he became a flight commander in the 14th Air Support Operations Squadron, a forward air control unit whose job is to work with army ground commanders to coordinate airstrikes. He served a tour in Afghanistan in 2013 during force drawdown operations before returning to the Air Force Academy as an instructor, teaching political science. In 2016, he was one of only three officers chosen for the prestigious PhD program.

His advice to other potential PhD students at HKS? “You cannot overstate the importance of a good advisor-student relationship for success in a PhD program,” he says. DeWees says he had great respect for Lerner and Minson’s work, but it wasn’t until he met them that he discovered how vital it was to have advisors who were engaged and caring.

“I met with them and they were both willing to say, ‘Yes, we’d be happy to work with you,’” he says. “Honestly, there are not a lot of tangible incentives for advisors to work with PhD students. They basically did it as volunteers, because they care about training the next generation of researchers. It was very comfortable and both relationships were characterized by a high degree of trust.”

In an important development, Lerner became the chief decision scientist to the Navy in 2018—a role created specifically for her and in which she reports directly to the chief of naval operations and helps the service harness the science of judgment and decision making. “That is a very, very big deal in terms of the background that I come from,” he says.

DeWees says he’s also grateful to Lerner and Minson for their personal interest in big life events, like when he and his wife, Kate, celebrated the birth of their son Jackson halfway through his program.

After defending his dissertation, DeWees and his young family will resume military life, moving to Fort Carson, Colorado, where he will join the Air Force’s 13th Air Support Operations Squadron, which supports the Army’s 4th Infantry Division. He says he hopes his research work has made a contribution to the field, even if it may be “a bit too narrow” for direct application to his next post.

“What I do hope applies is my Kennedy School training in empirical research, and the insistence on bringing good evidence to bear on difficult problems,” he says.