Aalok Pandey MPA/ID 2019 wants to build for the future, by expanding infrastructure and political inclusion 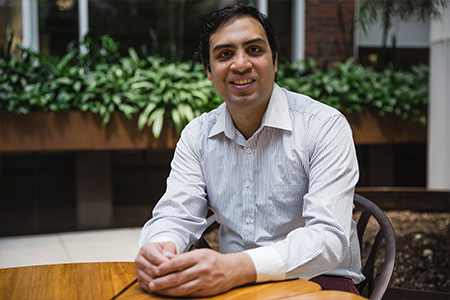 Pandey grew up in Kathmandu, Nepal, in a family steeped in development and service. His mother, a public health professional, worked with HIV and AIDS patients at a time when the disease was still taboo, and his father is involved in development issues.

But he was also growing up in a rapidly changing country. Civil war roiled Nepal from 1996 to 2006, and the monarchy that had ruled for more than 200 years was breaking down and would eventually be overthrown, leading to the establishment of a federal republic in 2008.

That was the year Pandey headed to the United States to study math and economics at Trinity College in Hartford, Connecticut—but his plan was always to go back home. “There was a sense of new beginnings,” he says. “A sense of new hope. After graduating, I thought it was a good time to go back and get involved with nation-building.”

Back in Nepal, Pandey served as an economic analyst in the government’s Office of the Investment Board—an economic development agency mobilizing domestic and foreign investments in Nepal—where he facilitated investments in big-ticket infrastructure projects. This experience ignited Pandey’s passion for such projects—not just in Nepal, but wherever they might be needed.

While focused on his mission to improve infrastructure, Pandey learned unexpected lessons both through the interactions he enjoyed with his fellow students as well as in courses that taught softer skills. “I learned technical skills but also how to work with students from different backgrounds and cultures,” Pandey says. “That’s what the program teaches you.”

Pandey is the only Nepali person in the heavily international program—about 30 nationalities are represented in his class—and he recalls one memorable evening when he cooked a traditional Nepali meal for his roughly 70 classmates. “It was the only all-nighter I pulled at HKS,” he jokes. Those small moments of sharing cultural touchstones made the MPA/ID program special.

Through the course “Exercising Leadership: The Politics of Change” Pandey learned formal techniques for interacting with others. “It basically taught me how to think about people who might have different opinions,” he says. “Why are they saying the things that they are saying? It’s really important to understand. It helped me empathize with people more.”

Nepal has a caste system, and historically only the highest castes have ruled the country. Pandey is adamant about the need to engage the remaining 70 percent of the population who have traditionally been left out of politics, including indigenous groups who fall outside the caste system.

Pandey knows that these questions are not easy to solve. “Of course, there is going to be a lot of resentment,” Pandey says. “But how do we get through that resentment so that we can get to the process of nation-building? Classes like ‘Exercising Leadership’ help.”

Immediately after graduation, Pandey intends to work in development outside of Nepal, but within 10 years he wants to return home and dedicate himself to solving the infrastructural problems his country faces. His aim is to hold a leadership role in the Office of the Investment Board, where he had previously worked.