Cotacachi is working from within the system to protect the lands of indigenous peoples.

To protect the environment that indigenous peoples like his depend on so completely, David Cotacachi MC/MPA 2021 has long had to bridge two worlds—that of the native inhabitants of the land and that of the economic interests seeking to develop its resources.

Cotacachi is a member of the Kichwa-Otavalo people and grew up in Peguche, a rural community in the highlands of Ecuador. For as long as he can remember, he has felt a closeness to the land—borne both from an ancient connection to the sacred place, from an appreciation for its beauty and fragility, and from a sense of reliance on it for resources as basic as food and water. It is also, Cotacachi says, a closeness made stronger by the fact that he, like so many indigenous people, is excluded from so many other things in the society in which they live.

Against the odds, he finished high school and went on to San Francisco de Quito University—discrimination and a lack of resources are common barriers for many indigenous students like him, Cotacachi says. He studied applied ecology, and then made a difficult choice: to work for the very extractive industries—in his instance an oil company—that most threatened the environment he felt compelled to protect. 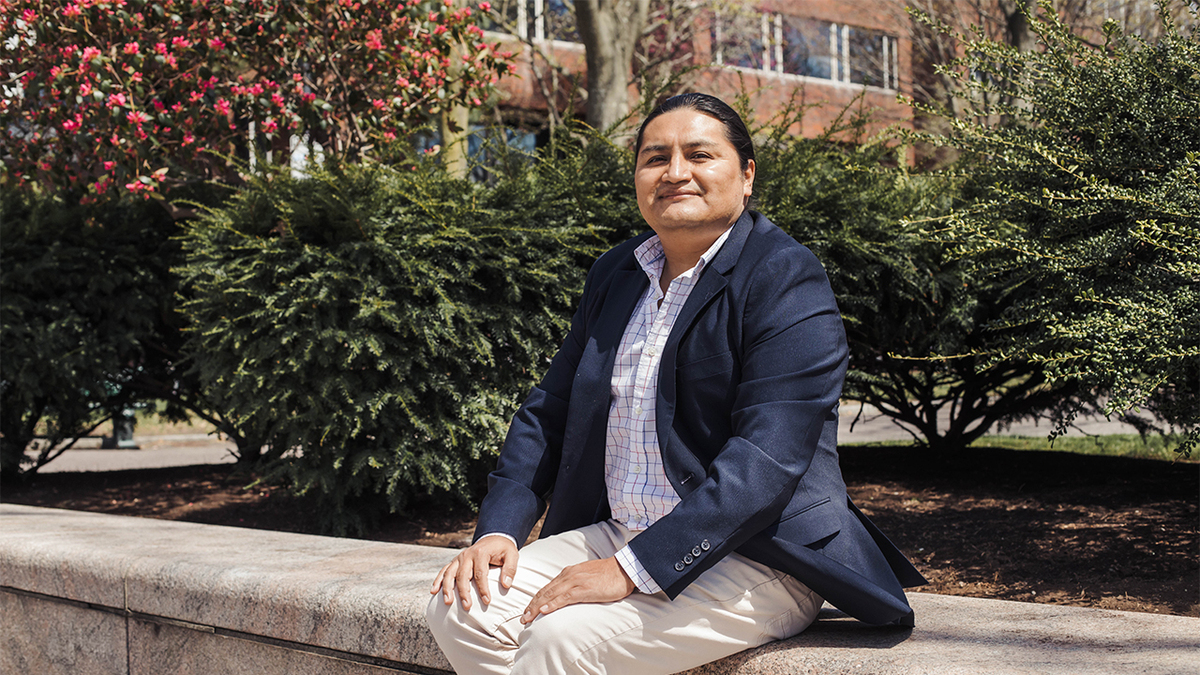 “I thought, ‘How can I be more effective in my goal of protecting indigenous peoples’ land?’ And then I realized that if I became, in some way, part of the system—making change from inside the system—I could be more effective,” says Cotacachi from his base in Cambridge, where he has spent the second half of the academic year, after starting out remotely in Ecuador. “I thought I could be more sensitive about what was happening, and I could be a better liaison between the companies and indigenous communities.”

“For me it was natural to promote mutual understanding between indigenous peoples and the companies, technically speaking, but at the same time, it was challenging to live facing permanent dilemmas. I was living in two worlds,” he says.

He felt torn between his sense of duty to protect the resources of the indigenous peoples he was liaising with and the interests of the companies he was representing. Fortunately, his work coincided with a greater emphasis on sustainability issues in the extractive industry.

Cotacachi continued to pursue his education, and his ambition to work for the Inter-American Development Bank (IDB). He attended the University of Georgia, studying a master's in ecology under the Fulbright Program. And, after repeated tries, finally was hired. He has been working at IDB for eight years, designing and executing projects to protect biodiversity and related to climate change adaptation and mitigation in indigenous peoples' territories and throughout Latin America.

“This was, again, a huge opportunity for me to influence public policy from inside an organization,” Cotacachi says. “I managed to put indigenous peoples’ issues on the agenda.”

“I realized that if I became, in some way, part of the system—making change from inside the system—I could be more effective”

But Cotacachi still didn’t feel he was able to affect the change he wanted. “Although my technical skills were very strong and I was able to design and execute many different projects, I felt that I needed something else,” he says. “I arrived at a point in which I felt I was going against the entire organization. And I felt needed to reinvent myself and do something. I needed better leadership skills, persuasive communication, and political thinking.”

He attended two executive education courses at Harvard—one on Afro-Latin American studies and another on digital transformation in government at HKS—and realized the Kennedy School would be the best way for him to develop himself into the leader he wanted to be.

Throughout his life, he says, it was only through financial aid that he was able to further his studies. And it was support via a Ford Foundation Mason Fellowship and a Louis and Gabrielle Bacon Environmental Leadership Fellowship that gave him the opportunity to take a leave of absence from his IDB job to attend the Kennedy School.

Cotacachi is now thinking about how to bring more impact, either as a specialist at IDB or advising national governments or multilateral institutions: “I want to continue protecting the territories of indigenous peoples and promoting our well-being according to our views and identity. ”