Bryan Swann MC/MPA 2019 first learned about the power of community and service at his childhood home in Prince George’s County in Maryland, just outside of Washington. Swann’s mother, an elementary-school teacher and later school administrator in the county, would often invite her students over—for a brief dinner or for the length of a school vacation. “The school was in a depressed area,” Swann says. “She would always have kids at our house if they were going through a difficult time because their parents were dealing with drug abuse or domestic violence. She treated those kids like her own. It’s one reason why service is so important to us.” 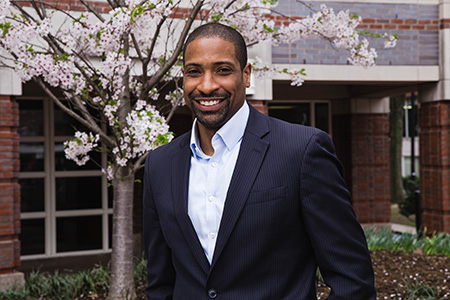 When Swann says “us,” he is referring to himself and his identical twin brother, Ryan Swann MC/MPA 2019, whose trajectory has paralleled his own to an uncanny degree. After high school, the twins joined the same unit of the U.S. Marine Corps Reserve and were sent to Iraq as part of Operation Iraqi Freedom II. At the same time their oldest brother, Henry Swann, was deployed to Iraq with his U.S. Army Reserve unit. After the twins’ return to the United States, they finished undergraduate degrees at the University of Maryland and set out for careers in the federal government—Bryan Swann most recently as a deputy director working on financial management for the U.S. Department of Treasury, with Ryan Swann rising to become director of data analytics for the General Services Administration’s Office of Government-Wide Policy. Now the twins are about to graduate together from Harvard Kennedy School.

While Swann credits his time in the military with impressing upon him the importance of front-line duty, it is his experience in government that has given him insight into the intricacies of policymaking. Working in the White House Military Office during the Obama administration, he saw that government really could work, with different agencies collaborating with one another effectively. “You could see tangible things happening, and it increased my desire to serve,” Swann says. “I believe in our government and that we can do great things when we have the right leadership and we empower government employees with the tools to serve. I really believe in that.”

A stint as a White House Leadership Fellow in the United States Digital Service—a unit dedicated to improving the federal government’s digital services and websites—also illuminated for him where government could be improved. In Swann’s view, the public sector lags behind private businesses in customer-facing digitization and innovation. He and Ryan Swann—who both hold MBA degrees and have launched their own business ventures—are especially interested in the intersection of innovation, technology, and government. And they take a tech-minded and entrepreneurial approach to public problems. “How do we bring government service to where our people are in terms of technology?” Swann asks. “Technology touches all parts of our lives now. If you don’t embrace it, you’re going to be left behind.

In the short term, the Swann brothers plan to continue in the federal government or possibly develop their own digital services firm, with Bryan Swann focused on the operational aspects and Ryan Swann on the data. In the medium term, however, they want to run for elected office. Would they run against each other? “No,” Swann laughs. “We operate like a unit. We joke that our pronouns are ‘we/ours.’ But we are strategically looking at which electoral tracks each of us would take.”

"I believe in our government and that we can do great things when we have the right leadership and we empower government employees with the tools to serve. I really believe in that."

What the twins do know, however, is that they want to serve Prince George’s County, Maryland, where they grew up and have deep roots. The county has an affluent African-American population but also pockets of poverty. To get at the heart of the issues community members care about, the twins want to go through “a period of discovery where we can really hear what the people have to say and talk to them about what is working and what is not,” Swann says.

In his view, getting a finger on the pulse of his home county is essential in order to make real change. “A lot of elected officials in Prince George’s County come from outside,” Swann says. “We want to change that. We want to represent the people we grew up with and care about. We don’t know everything. But I think we have the tools to get to know what’s on the minds of the citizens we want to represent.”