Claudia Nastase MC/MPA 2019 aims to protect the dignity and human rights of refugees.

Her father’s disappearance when she was 3 years old. Her forced departure from Romania just before the fall of the Berlin Wall and the end of the Cold War. Her sudden shift in careers following a medical scare. For Claudia Nastase MC/MPA 2019, what could otherwise have been setbacks or worse have always been opportunities—inflection points that guided her along a path toward her purpose of preserving the dignity and human rights of refugees. 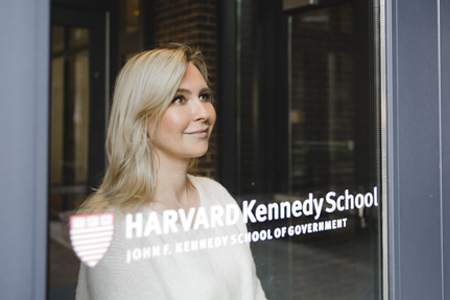 It started young. “While queueing for hours to gather provisions in Bucharest, I used the time to socialize,” explains Nastase, an Edward S. Mason Fellow. “It felt like an adventure: I could ask a million questions and create new games with new friends. Often, we would never make it to the store; we’d show up the next day—still at the back of the line. I find it amazing how difficult conditions can bring out the best in people.”

When she was 5 years old, Nastase and her mother received approval to reunite with her father, who had fled to France where he had received asylum from the oppressive Romanian regime. They were asked to leave Romania within 48 hours and with no more than 5 kilograms (about 10 pounds) of belongings.

“My mom took nothing for herself so we could keep my clothes, my one doll, and my pillow,” Nastase says. “She went through real shock with the overwhelming choices offered by an advanced economy, a new language, and leaving behind her parents. I did my best to help, study, and learn.”

The desire to give back to her parents for the risks they endured drove Nastase. She studied finance in Paris and was considering jobs with large financial institutions, but she began to manifest worrisome health symptoms that doctors couldn’t clearly diagnose. Uncertain about her health, Nastase chose to stay in Paris and took an internship at UNESCO, an institution she had long admired. The doctors would eventually give Nastase a clean bill of health, but the episode helped her select a professional path.

Nastase went on to work for UNESCO for nearly nine years, where she helped coordinate a complex change management effort to bring more efficiencies, accountability, and transparency to the multicultural, multilingual organization at its headquarters and more than 50 field offices.

Later, while leading the finance team for the Africa region of the International Labour Organization, she was a key player in the relocation of its regional office from Addis Ababa, Ethiopia to Abidjan, Côte d’Ivoire. Nastase credits successes in times of change, and in particular in times of crisis, to prioritizing strategy, taking the time to streamline operations, and including the many various stakeholders in the decision-making process. She earned a reputation for being a persevering problem-solver.

Nastase’s life has been a study in how to hold steady in changing circumstances. Now, she says the Mid-Career Master in Public Administration program has given her the skills to translate that gift into tangible and intentional tools.

“As unattainable as some outcomes might seem, I will never regret trying. And trying involves countless failures and learnings before you call it a success.”

The course “Public Narrative: Self, Us, Now,” taught by Rita E. Hauser Senior Lecturer in Leadership, Organizing, and Civil Society Marshall Ganz, “was a chance for real introspection and to clearly articulate my own path,” Nastase says. “I learned the power of assertiveness and of communicating our stories in order to connect with others.”

Adjunct Lecturer Hugh O’Doherty’s course “Exercising Leadership: The Politics of Change” taught Nastase how to navigate as an individual leader within a larger system. “It’s not just about what I want and who I want to be as a leader, but how I can achieve it operating with other external forces,” she says.

Samantha Power, Anna Lindh Professor of the Practice of Global Leadership and Public Policy, was also an inspiration. “Her course, “Geopolitics, Human Rights, and the Future of Statecraft,” helped me make choices about my path, and she always made time to talk with and advise me,” Nastase says. “I’m honored that she saw my commitment to promoting human security with the UN.”

Nastase expected to learn hard skills at HKS, but was surprised by the life skills it offers. “HKS develops your ability to deal with stress and massive amounts of information, and cultivates your perseverance, resilience, confidence, passion, and social responsibility,” she says.

Now, she is ready for a new challenge: she will take a high-level position with the UN in the Gaza Strip right after graduation. Where some may see hardship and conflict, Nastase sees an opportunity for the best of human nature to emerge.

“If your purpose is not bigger than yourself and has no social contract attached to it, I think that may be problematic,” she says. “As unattainable as some outcomes might seem, I will never regret trying. And trying involves countless failures and learnings before you call it a success. The only real failure is not trying: it’s thinking you’re too small and closing your eyes, ears, and heart. My internal fire will never let me make that mistake. I’m grateful to HKS for reigniting my sense of purpose: dedicating myself to the dignity and human rights of refugees. To me, this is worth taking any risk.”