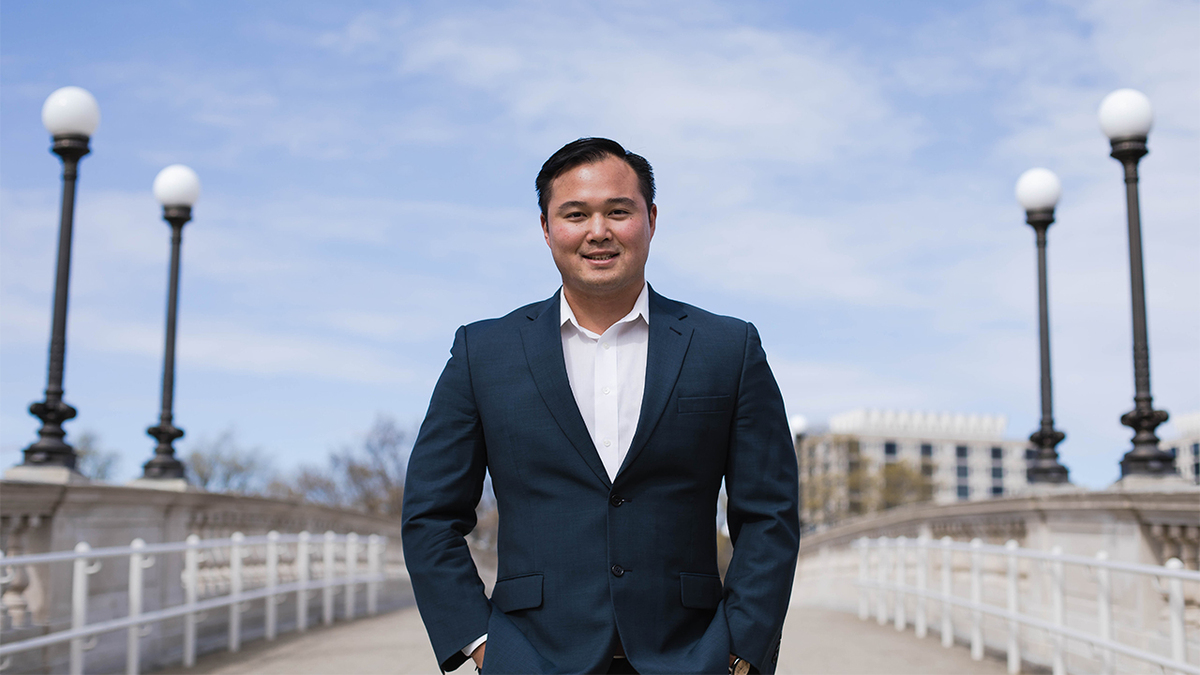 Yuan wants unique perspectives to have a seat at the table when critical decisions are being made.

Clark Yuan MPA 2022 watches the growing rivalry between the United States and China with an unusually deep understanding of both military cultures. He’s determined to bring that rare perspective to the table when critical decisions are made in the years ahead that could shift the balance between war and peace.

Both of Yuan’s grandfathers were military officers who fought on the losing side of the Chinese revolution in the 1940s. They retreated to Taiwan with defeated Nationalist leader Chiang Kai-shek, who set up the Republic of China government defending the island against the victorious Communist Party ruling mainland China. Yuan’s father followed that military tradition, serving as an officer in the Taiwanese Air Force.

In 1996, after another dangerous showdown between China and Taiwan over the strategic Taiwan Strait, the family immigrated to the United States when Yuan was six years old and settled in Troy, Michigan. Given his family’s military heritage and deep loyalty to their new homeland, it made sense that Yuan enrolled in the U.S. Military Academy at West Point, where he double majored in Chinese and systems engineering.

During a semester abroad in Beijing in 2010, Yuan learned that his maternal grandfather had located his younger brother—still alive in China. The family asked Yuan to travel to Guizhou to meet his newfound great-uncle, whose two daughters had married Chinese People’s Liberation Army officers. They met there and connected over their shared military experiences. 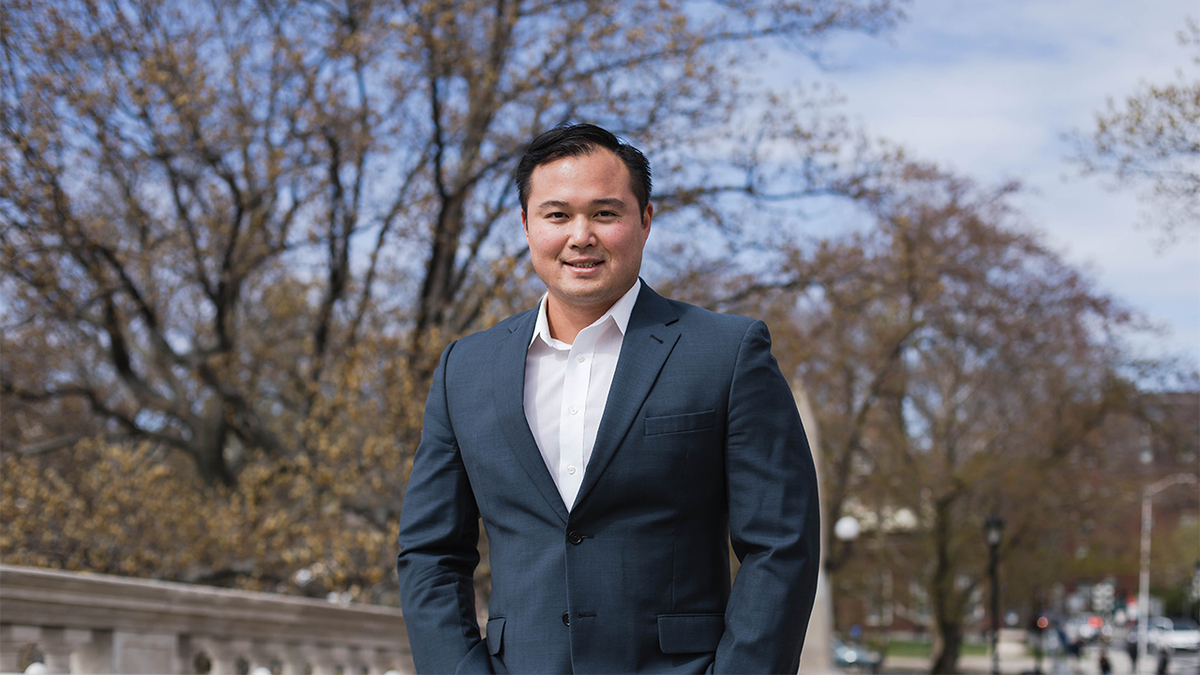 After graduating from West Point, Yuan went on to serve on active Army duty for seven years, including a year at King’s College London, where he studied China and globalization. He served in Afghanistan as a counterintelligence analyst with an elite unit attached to the Joint Special Operations Command. He then became a counterintelligence platoon leader, working with about 40 special agents in training at a base in Washington state.

He then spent nearly three years in South Korea, ultimately being promoted to captain and commanding a company of about 200 soldiers in the Demilitarized Zone on the border with North Korea. At that point, having gone through multiple knee surgeries, it felt right to leave active service and go to graduate school. He remains a reserve officer, assigned to the 75th Innovation Command—a perfect home for someone who wants to help shape strategic military technology that might influence the U.S.-China power balance.

Yuan was admitted to pursue joint graduate degrees over three years—his Master in Public Administration at Harvard Kennedy School and a Master in Business Administration at MIT’s Sloan School of Management. He won a coveted Tillman Scholarship, named after the former NFL football player Pat Tillman who joined the Army after 9/11 and was killed in Afghanistan.

At the Kennedy School, his teachers have included Ash Carter, Belfer Professor of Technology and Global Affairs and former U.S. defense secretary, and Graham Allison, Douglas Dillon Professor of Government and former HKS dean who is leading a major project on the U.S.-China rivalry. As a research assistant, Yuan wrote three research papers for Allison’s project on military and cybersecurity aspects of the U.S.-China competition.

He credits Carter with advising him not to get too narrowly focused in plotting his career path because that might prevent him from spotting unexpected opportunities. From Allison, he learned about the Thucydides Trap, in which rising powers often end up going to war with declining powers as happened between Athens and Sparta in ancient Greece.

“I think wars break out on the judgments of a few individuals, so a bad decision from a president can lead entire countries and the entire world into wars,” Yuan says. “So, I think those people need to have sound advisors. And if the need is really to go to war, then yes, we should focus our efforts on that. But every effort should be made to prevent that from happening. And my goal is to one day be at the table when these decisions are being made.”

“I just think there’s common ground to be found and there needs to be that voice in the room to avoid strategic miscalculation.”

He believes his dual cultural understanding gives him insights into the nuances that go on behind the thinking of both American and Chinese leaders. “It’s not just a matter of GDP per capita or how many aircraft carriers and jets you have,” Yuan says. “It’s the cultural and ideological nuances behind your posture, and whether you actually know who your enemy is. And it’s difficult to find common ground unless you’ve lived in their shoes.”

“I understand the way [the Chinese] talk about America and how they see it as this shining light on the hill,” he adds. “Everything that China is doing, whether it’s a focus on economic liberalization or military modernization, is because America is the measuring stick that instills motivation and admiration … . So, I just think there’s common ground to be found and there needs to be that voice in the room to avoid strategic miscalculation.”

Yuan says influence on the decision-making process can be exerted from someone in a military or government role or from someone in industry, creating a technological advantage that becomes a lever of power. At HKS and MIT, he explored them all: he did four internships, including at the U.S. Treasury, Goldman Sachs, Citadel, and the City of San Antonio. None felt quite right. But then he discovered entrepreneurship, “and that immediately took over in terms of my passion and what I felt I could do with it.”

He has since launched a startup called Candelytics that is developing 3D data visualization that he hopes will contribute to future military needs—for example, in protecting Air Force airfields from crippling attacks. As a reserve officer in the 75th Innovations Command, Yuan has gained unique insights to launch a dual-use (government and commercial) business.

“The Kennedy School model is how can you basically be a better citizen,” Yuan says. “And for me, that altruistic motivation is what can I do to prevent a catastrophic war from breaking out between China and the U.S.? That has driven a lot of my academic and career decisions [and] kept me aligned for the last 10 or 15 years. It’s given me motivation and energy to keep building and keep working toward something because there’s a much larger goal at the end of it.”