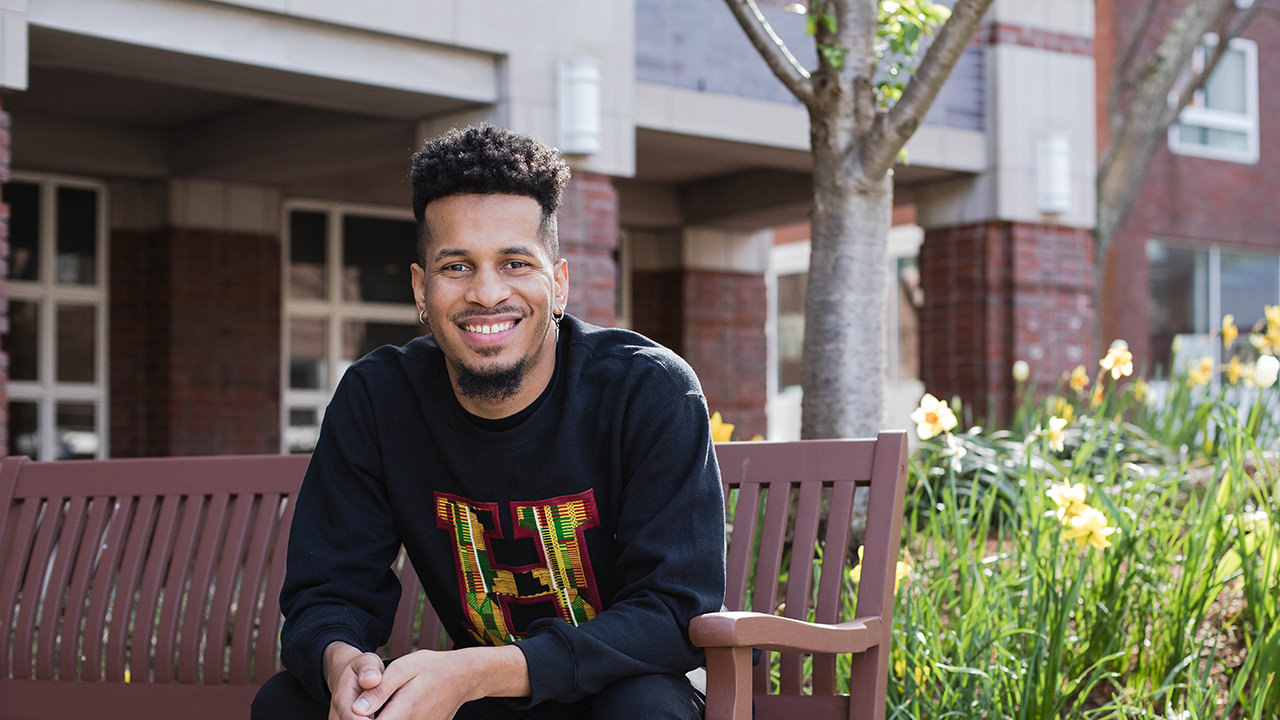 In music theory, a chord is a group of three or more notes that form the basis for harmony.

Ensuring that each chord sounds in its full brilliance is how Damarcus Bell MPP 2022 frames his work in music, teaching, and advocacy. “When I think about what it feels like to make music, to perform music, to listen to it, those are all collective experiences,” just as education and activism are rooted in collectivity, Bell says. “If a single chord member is missing or out of balance, it won’t sound the same or have the full effect. It’s similar for teams, institutions, and communities. If any one individual isn’t successful, we’re not successful as a community.”

A Center for Public Leadership Fellow for Serving African-American Communities, Bell grew up the oldest of three brothers in Atlanta, Georgia, where he moved with his family at the age of 10. “It was a powerful experience,” he says, to have been raised in a thriving Black community with a Black mayor, and many historically Black colleges and universities. In Atlanta, his talent for music was cultivated by elementary and middle school music and band teachers. He learned to play almost all the instruments in the band, starting with the trumpet. As a high school sophomore, he enrolled in AP music theory, a course reserved for seniors, and added choir to his repertoire. From a young age, “I could picture music in my head, or if I saw the music on paper, I could hear it,” he recalls.

Bell’s synesthetic ability to see music when he hears it has a parallel in his gift to see and hear what others overlook, to perceive harmony, beauty, and brilliance in communities where others may see only the metrics of low-test scores and high drop-out rates. After completing a degree with honors in music and a minor in sociology at Morehouse College, he moved to New York, where he earned a master’s in music education at New York University while serving as a teacher, educator, music department head, and assistant conductor for various institutions, including NYU, the Community Roots Charter School, the Urban Assembly School for the Performing Arts, and the Eagle Academy Foundation for Young Men in Brooklyn, a network of  schools shaping young men in grades 6 through 12 to be leaders in underserved communities. 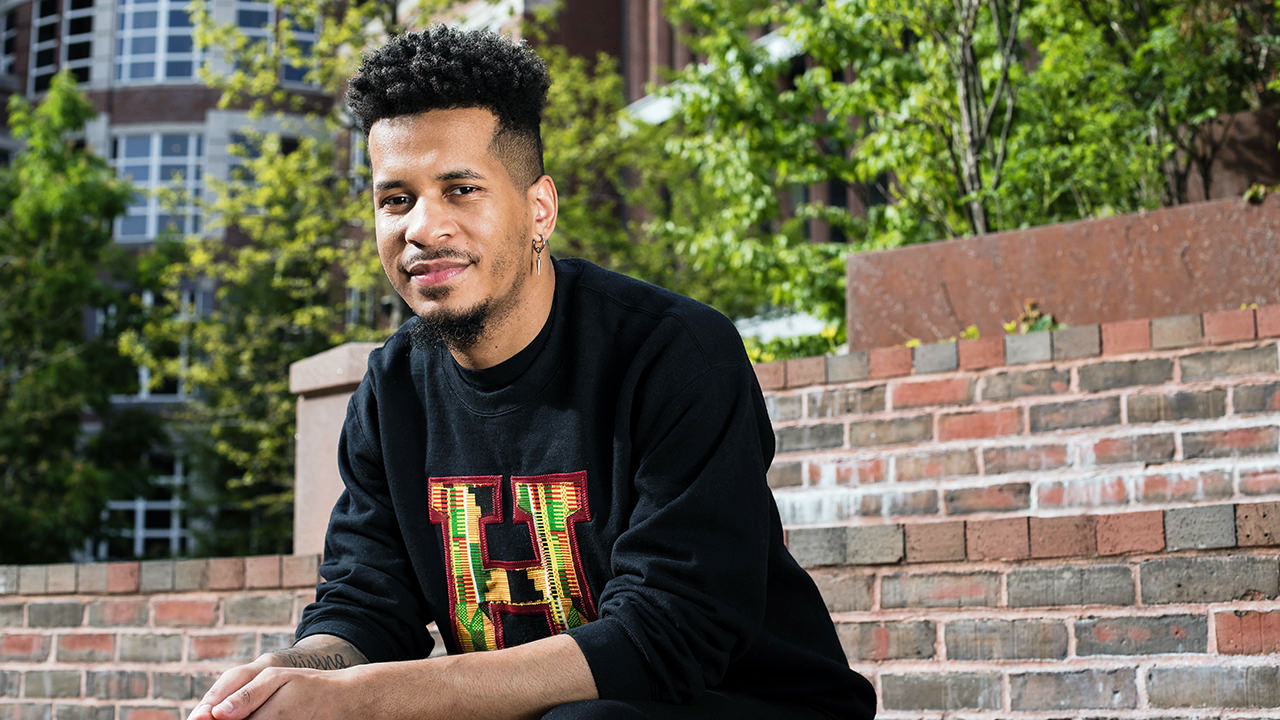 As the music department chair, and director of events and school culture at the Eagle Academy, Bell served as a teacher and mentor to hundreds of young men. During his tenure, he started the Sounds of Brotherhood musical ensemble, a live band and show choir; organized Peace and Love concerts throughout Brooklyn in response to an epidemic of gun violence; and pioneered a leadership and social justice class that incorporated Black studies, critical theory, and case studies to identify and solve problems in the community.

“Seeing and being able to help people reach their potential, to become their best and truest selves, not only as individuals, but in terms of what they can do collectively, that has so much power,” says Bell. While empowering his students through music and mentorship was a transformative experience, he realized that “the things that were impeding their brilliance were beyond the scope of a single classroom or school.”

Bell came to Harvard Kennedy School to help communities of color thrive on a more systemic level, “to reshape institutions and policies, and even theories, the way we think about problems on a large scale.” At HKS, Bell has contributed to campus life on an extraordinary level. In his first year, he directed content and strategy for the Black Policy Conference and ran for student government as vice president of diversity, a title he won, and changed to vice president of diversity, equity, and anti-racism because “diversity is the floor, not the ceiling of equity and inclusion. It’s not enough to have people who look a certain way in spaces. What is their impact? What are their outcomes? Are we actively thinking about policies that advance those things?”

That first year, he advocated for the MPP course “Race and Racism in the Making of the United States as a Global Power” to be extended from two weeks to a full semester and helped transform previously uncompensated work for students into paid positions with the Office of Diversity, Inclusion, and Belonging.

“Seeing and being able to help people reach their potential, to become their best and truest selves, not only as individuals, but in terms of what they can do collectively, that has so much power.”

Bell has also served as a graduate teaching assistant for six Kennedy School courses, including for Cornell William Brooks, Hauser Professor of the Practice of Nonprofit Organizations and professor of the Practice of Public Leadership and Social Justice. Bell has taken a course with Brooks every semester and credits him with “teaching me about moral framing, and how to bridge institutional and community divides to create lasting change.”

One framework Bell hopes to change is data—how data, especially about communities of color, is compiled, communicated, and deployed in public policies, and even more importantly, how impacted communities can contribute to and benefit from data-driven policies themselves. He recalls being troubled by a study he found on the criminalization of Black youth on a Harvard faculty webpage. These were young men like the ones he taught at the Eagle Academy, who he knew to be exceptional, reduced to statistics. Bell didn’t have the capacity at the time to pinpoint the empirical oversights of the research conclusions. But that same day, at an orientation for students of color, assistant professor of Public Policy Desmond Ang urged students to excel in their data courses because “if you’re not there, there’s no one to question that research.”

Bell began working with the Malcolm Wiener Center for Social Policy in their data visualization lab, where he is a managing editor, and was a research assistant to Sandra Susan Smith, the Daniel and Florence Guggenheim Professor of Criminal Justice and faculty director of the Program in Criminal Justice Policy and Management, as well as the Carol K. Pforzheimer Professor at the Radcliffe Institute. Applying his new data skills, Bell advised Campaign Zero on their efforts to reduce police violence, as well as the city of Atlanta, his hometown, on how to obtain data more accurately, and make more data-driven and evidence-based policies and decisions.

Bell feels a duty to “return to communities like my own and fulfill the circle of reinvestment; just as people invested in me to get me to where I am, I want to take all that I’ve been given and empower underserved communities.” He sees the criminal legal system as one area where he can bring all his different lenses—racial equity, data, the collective empowerment and joy of music—to bear on an impactful scale. “There’s a lot of harm happening in the carceral system in ways that are not human-centered or cost-efficient,” he notes. “If we instead invested in and supported those people and communities on the front end, we could have a huge impact.” Ultimately, he aspires to help people see “the beauty and brilliance that I see in them; that’s my life goal—to make their brilliance legible.”

A passion for learning, communicating, and helping others