From political science to history to decision science to vodcasting, HKS has stoked his passion for interdisciplinary pursuits.

They say timing is everything. When the COVID-19 restrictions hit, Aroop Mukharji PhD 2020 says the good news was that he had already been “self-quarantining” since January to write his dissertation for a PhD in Public Policy. “So nothing about my day-to-day work life really changed,” he says. “Actually, I probably got busier because all of a sudden people wanted to do Zoom happy hours.”

His personal life was, well ... a different story. “I was supposed to get married in April. But it’s just been postponed, thankfully, not canceled,” he says of his disrupted nuptials to incoming Harvard Kennedy School student Valerie Eisenson MPP 2022, which the couple have managed to reschedule.

As far as Mukharji’s PhD work is concerned, the timing also falls into the good news category. The Kennedy School’s support for interdisciplinary study, he says, has allowed him to blend political science, decision science, economics, and history to study American presidential decision making—at a time when the subject could not be more topical or vital.

Specifically, Mukharji’s dissertation addresses the question of why U.S. foreign policy expanded significantly from 1897 to 1909, during the presidencies of William McKinley and Theodore Roosevelt. While American foreign policy during the latter half of the 19th century was mostly hemispherical, during the 12-year period, the United States fought three foreign wars, began governing numerous overseas colonies (including the Philippines, Puerto Rico, Hawaii, and Guam), and significantly expanded its diplomatic and military engagement in the world.

Mukharji’s research analyzes a half-dozen major foreign policy decisions by McKinley and Roosevelt, employing an original interdisciplinary method of historical decision analysis. He analyzes decisions by their “decision-generating factors” (forces that enabled or put a decision on the agenda) and “decision-making factors” (forces that swayed the president’s mind about what decision to make), and then ranks them. He says it is the first volume-length, paired study—published or unpublished—of McKinley and Roosevelt’s foreign policy.

His primary findings are that systemic political forces, like American power, geography and political dynamics, tended to be the most important decision-generating factors, while external events were mostly of secondary importance. He also concluded that—until he was assassinated in 1901—McKinley was an overlooked leader of American foreign policy and that his decisions were far more consequential than his successor Roosevelt’s, though each left his own significant mark in history. 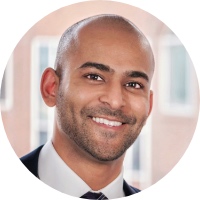 “I think in some ways I was really saved by HKS, since I was attracted to study at least two or three disciplines. I knew I wanted to study foreign policy, and I wanted to do it in an interdisciplinary way.”

Mukharji’s path to HKS was a winding one. Born and raised in Kansas as the son of Indian-American physicians (his father is a cardiologist-turned-painter and his mother is a hematologist-turned-cooking-instructor), he first came east to study political science and mathematics as an undergraduate at Williams College in Williamstown, Mass. His graduate studies included a couple of trips to the UK, including a Marshall Scholarship, before which he was a junior fellow at the Carnegie Endowment for International Peace. His penchant for pursuing varied interests finally landed him at the Kennedy School in 2014.

“I think in some ways I was really saved by HKS, since I was attracted to study at least two or three disciplines,” he says. “I knew I wanted to study foreign policy, and I wanted to do it in an interdisciplinary way. The public policy program is kind of a rogue program in that it’s really about choosing your own adventure—you can straddle many different subject areas,” Mukharji says. “And of course the foreign policy faculty in the Belfer Center are just so outstanding.” In addition to his studies, Mukharji has also found time to indulge his interest in interviewing, hosting two video series and podcasts: “Office Hours” (with the Belfer Center) and “Snack Break” (a solo project). The latter blends weighty discussions on policy with banter about the snack preferences of faculty members and includes episodes that explored Professor David Gergen’s preference for chewy chocolate chip cookies over crunchy ones, and Professor Kathryn Sikkink’s weakness for buttery shortbread.

After visiting Havana in 2017, he says he became fascinated with the U.S.-Cuba relationship and U.S. foreign policy at the turn of the 20th century. He felt a connection between today’s world and the 1890s: both were eras of economic depression, populism, race riots, feminism, and debate about how involved the United States should be in the world. So he decided to work history into his interdisciplinary mix, a decision that coincided with the arrival at the Kennedy School of historian Fredrik Logevall, who would become a close mentor and a member of Mukharji’s dissertation committee along with economist Richard Zeckhauser and political scientist Stephen Walt. Mukharji was named an Ernest May Fellow in History and Policy in 2018 (a fellowship named after a legendary HKS historian). He also became involved with the Applied History Project run by Graham Allison and Niall Ferguson at the Belfer Center.

He says he agrees with the Applied History Project’s premise that the study of current political and policy problems often lacks a proper grounding in historical precedents and perspectives. But he says the door swings both ways.

“Equally I think history suffers from under-incorporation of other disciplines. Like psychology—in particular decision science—and political science and political psychology. There's a lot of overlap but those disciplines are really not incorporated in the study of decision making in the past,” he says.

“It's not because people haven't thought of it; I just think it's really hard to do,” he says. “I don't know if I’ve pulled it off. I'm just trying to chip away at it.”

Uncertain with a chance of accuracy