Ghaznawi will represent the American dream as he undertakes a career as a diplomat.

Mojib Ghaznawi MPP 2021 recalls the family story: his father traveled from his native Afghanistan to Moscow to earn his doctorate in economics in the 1980s. There he met and married a beautiful Russian woman who was teaching in the same PhD program. As their worlds proceeded to fall apart in the early ’90s, with the centralized Soviet economy collapsing and Afghanistan gripped in civil war, the couple sought visas to immigrate to the United States.

They arrived in 1994, just in time for Irina Ghaznawi to give birth to Mojib, and settled in Falls Church, Virginia, where they built prosperous lives. “They got to the U.S. thanks to the State Department consular officers who helped them,” says Mojib. “That’s why I have such a big passion for public service, and for repaying that unpayable debt.”

After graduating in May, this first-generation American will join the U.S. State Department Foreign Service as an American diplomat, having passed the oral and written entrance exams on his first try. Ghaznawi will likely begin his diplomatic service with a stint as a U.S. consular officer himself, somewhere in the world.

He is one of just 30 graduate students nationwide who received the prestigious Charles B. Rangel Fellowship, which helps bring underrepresented Americans into U.S. Foreign Service careers and funds their graduate studies. The other two Rangel Fellows in his HKS class, Constanza Castro Zúñiga and Caroline Kim, coauthored a Policy Analysis Exercise final thesis with him, exploring State Department staff retention trends. 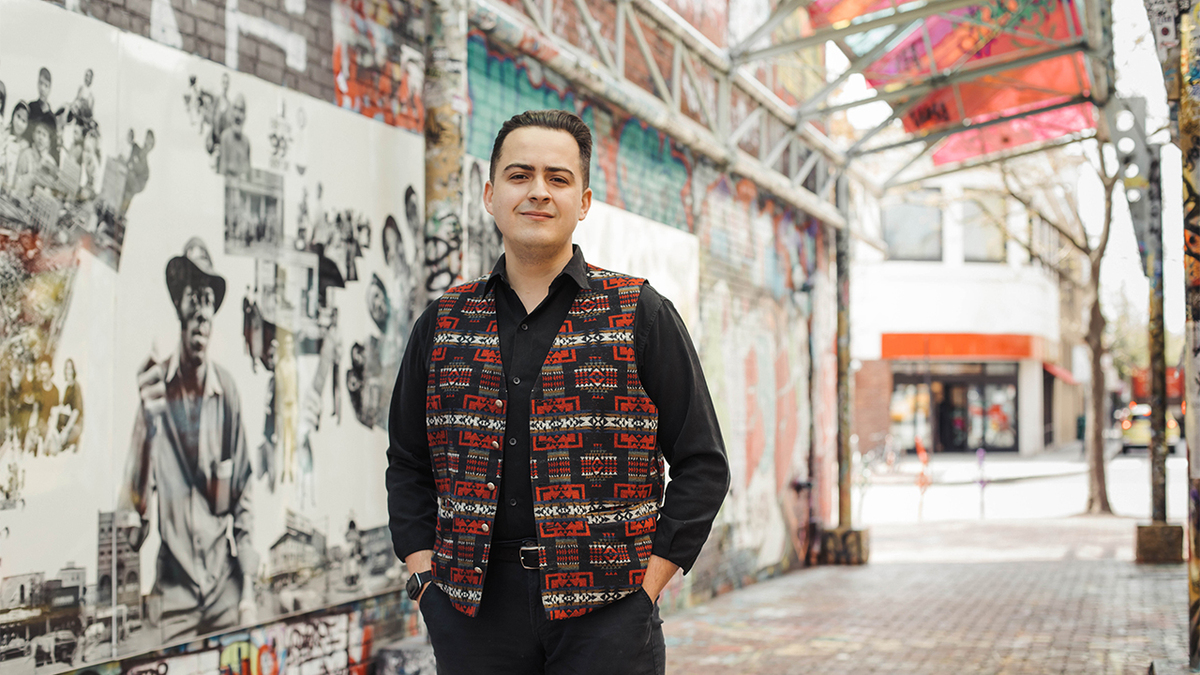 Ghaznawi is a relentless optimist—“I don’t see the glass half full; I see it as just enough to quench my thirst”—but the pandemic was draining. In part to get through the Zoom fatigue that came with studying remotely, he found characteristically creative ways to keep his spirits and energy up. One spring day, he took his flute and his sound system to Cambridge’s Central Square for a bit of busking in the sunshine. He earned $10, but he didn’t do it for the money. He did it for the music and the connections with people that it brings him.

“Music is everything to me, especially in this pandemic,” Ghaznawi says, adding that two of his six siblings are professional musicians. He picked up the flute in fifth grade, and as an undergraduate in George Washington University’s Elliott School for International Affairs, he took part in seven music ensembles, mostly jazz.

After college, he spent four years in Washington with the Reed Society for the Sacred Arts, which promotes and preserves sacred and traditional art forms from around the world. He helped with events, fundraising, and concerts. He also volunteered for an organization called Heartbeat that uses music for peacebuilding and dialogue between young Israeli and Palestinian musicians.

“I love the idea of converting hate to art,” he says. He hopes for a State Department career as a public affairs officer involved in cultural programming. For Ghaznawi, “music was always more than just entertainment or musical consumption; there’s a profound dialogue happening right then and there if you are attuned to it.”

“Thanks to my parents, I never had to choose to be half-Russian or half-Afghan. They instilled in me very early a profound respect for my heritage. I was raised full Russian, full Afghan, and that's what makes me an American.”

Before joining the State Department, he’ll remain in Boston for a few months as an intern for Silkroad, an organization founded by cellist Yo-Yo Ma to foster “a musical language founded in difference, a metaphor for the benefits of a more connected world.” For Ghaznawi, that is a way of coming full circle; his father is a native of a country that lies along the original Silk Road from China to the West.

Ghaznawi looks to his mother, Irina, for inspiration through the example she set for him in reinventing herself professionally in America. She has won numerous corporate awards for her ownership and management of two 7-Eleven store branches while raising a blended family. Through her, he learned Russian; he also speaks Dari Persian, Arabic, and Spanish. “I have so much respect and profound love for her, not just as her son, but just as someone to learn from.”

“Thanks to my parents, I never had to choose to be half-Russian or half-Afghan,” he adds. “They instilled in me very early a profound respect for my heritage. Instead, I was raised full Russian, full Afghan, and that's what makes me an American—because that’s only possible here in the United States.”

At the Kennedy School, Ghaznawi focused on what he calls active skills-based courses, including classes on writing, data visualization, crisis communications, and management, “so I can be among the most high-functioning public servants.” During the pandemic, he found that it helped to get outside whenever he could, and he made getaways to hike in New Hampshire and to wander the rocky shore at Halibut Point State Park in Gloucester. He also discovered a Cambridge hip-hop nonprofit, BridgeCyph, and jammed with them. New England now feels like a second home.

“Wherever I go, I make the best of it,” he said. “One of the things I look forward to in the Foreign Service is uprooting myself, going to a different place and reestablishing those roots and redefining myself again.”

Asked where he’d like to serve, he demurs, saying he really has no preference. With a smile he notes that his State Department clearances list him as “worldwide available.”