Motivated by a unique personal history and a love for music, Agignoae is helping refugees keep culture, and hope, alive.

Sebastian Agignoae MPP 2022 grew up in the suburbs of Chicago, the son of Eastern European immigrants who had settled in the Midwest. His father, Agignoae would find out by accident, had fled Romania after being detained by communist authorities for playing music. That explains in part why Agignoae founded the International Orchestra for Refugees (IOR) in 2018, a support network as much as an orchestra, which brings together musicians who for whatever reason had to leave their homelands. Agignoae’s motivation can also be traced to piano lessons and biochemistry. While he disliked them when he was a kid, the piano lessons eventually opened the door to a passion that would sustain him in more ways than one (aside from nurturing the soul and connecting him to his father’s love of music, gigs at churches and cocktail parties helped pay the bills while he was at college). Biochemistry, which he studied through college and continued to explore during internships with Harvard University and MIT’s Broad Institute while at HKS, helped him see how single components could combine to form a complex whole.

Q: What motivated you to form the refugee orchestra?

In the spring of 2017, I was looking through my family’s security box for my social security card. I came across a document from 1988 signed by the United Nations high commissioner of refugees; it had my family’s last name on it. Puzzled, I approached my parents. What on earth was my family doing with the UNHCR? “You should probably sit down for this,” said my father. I resemble a typical American, suburban, young adult. However, my family’s household was hardly that. My mom emigrated from Poland, and my father from Romania, both with the vision of living the American dream.

The document that I found in 2017 revealed that my father fled Romania at the height of the communist regime as a refugee. He had been persecuted for being a musician, having been detained multiple times by the Romanian secret police.

After this discovery, I began reaching out to other refugee musicians, like my dad, interested in finding ways to support them. All of this came at a pivotal time in history, where the UNHCR reported that 1% of the world's population was forcibly displaced.

Discovering his refugee papers and understanding, from him, what this journey was like compelled me to begin my own project: the International Orchestra of Refugees. It’s a nonprofit whose mission is to connect talented refugee musicians with meaningful opportunities to preserve their cultural heritage, find economic prosperity, and boost social integration.

For many, the arts are a lifeline—something that was especially true during the darkest days of the pandemic. Entire civilizations have been remembered through the arts. With over 80 million forcibly displaced persons, refugees can come together to use music and art to write their story, and change their future—to prosper, not just survive. 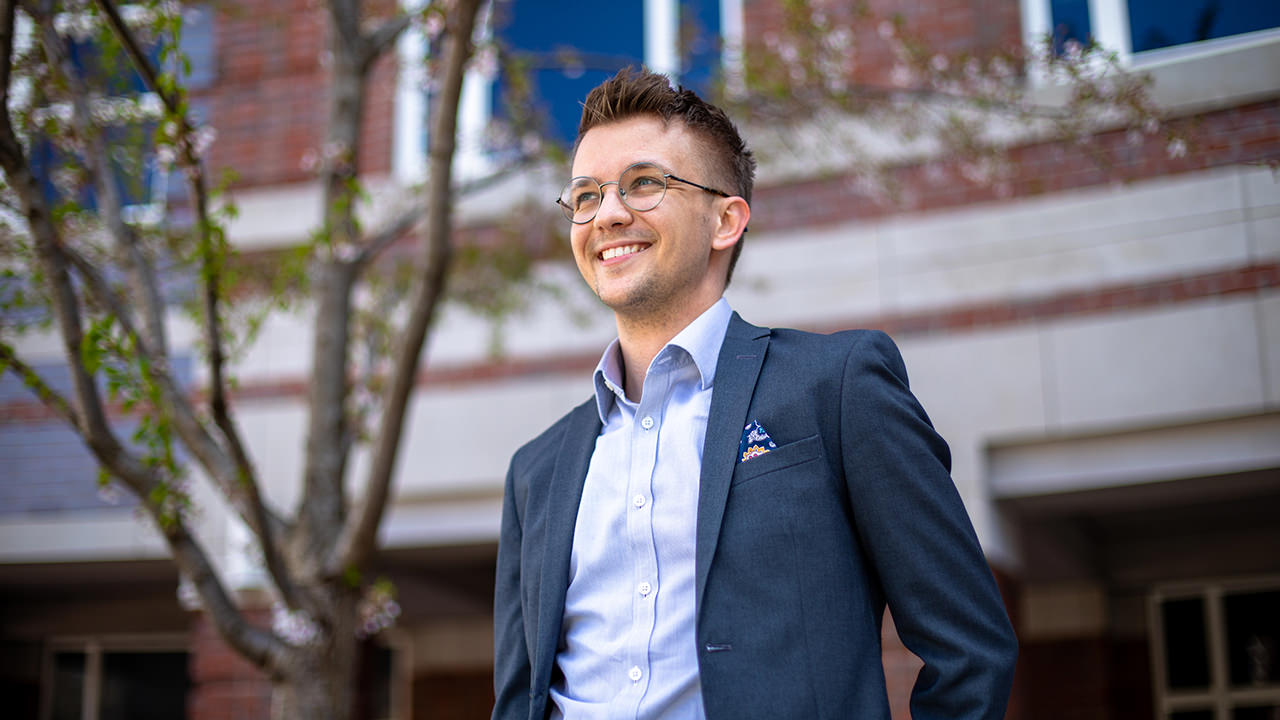 Q: What brought you to HKS?

During my early stages of campaigning for the IOR, an alum of HKS I had never met before reached out to me to learn more about the initiative. He encouraged me to apply to the Kennedy School, suggesting that the experience would equip me to strongly lead this venture. Being a first generation American, and the first person in my family to have graduated from college, I thought his proposal was out of reach. Still, I knew I needed institutional support, training, and education to bring my vision of the IOR to life.

At HKS, my professors taught me valuable quantitative skills, strategies on working multilaterally with different stakeholders in different sectors, the power of storytelling, and how to build an effective organization. Outside the classroom, I also led the Catholic Caucus—a group that constantly reminded me of the importance of faith in your work. Outside the walls of HKS, a friend introduced me to a dozen refugees from African countries who play music together in Malden, Massachusetts—a short drive from Cambridge. Without hesitation, they showed me that the importance of arts and culture cannot be understated.

This social impetus did not, however, make me leave aside my interest in science and technology—a career I was pursuing prior to IOR. During my time at HKS, I also worked with the Sabeti Lab at the Broad Institute of MIT and Harvard. My work experience at the Broad prepared me to contribute to healthcare policy issues at the forefront of public health and infectious disease outbreaks. With the Sabeti Lab, I developed my understanding of humanizing technology to serve the public interest—enabling the global community to see public health and infectious disease threats sooner and faster.

What lesson struck me most? In response to the Kennedy School’s motto, “Ask What You Can Do,” I learned to lead like a conductor, though not one that dictates and conducts musicians in a tyrannical way. Rather, one that comes to rehearsal with a tenacious sense of the outer architecture of that music, within which there is immense personal freedom for the members of the orchestra to shine.

“I learned to lead like a conductor ... one that comes to rehearsal with a tenacious sense of the outer architecture of that music.”

Q: What are your near term and long-term career plans?

Currently, I want to help develop a thriving ecosystem for the arts, with the possibility of transforming the way refugee art communities are perceived and sustained. My time at HKS has positioned me to engage in social impact work more effectively. Migration and the refugee crisis are at the top of my agenda, and I am currently exploring how I can better facilitate conversation on this global issue and elevate the work of the International Orchestra of Refugees.

In the long term, with today’s compelling issues—from climate change to global health to the refugee crisis—I strive to integrate meaningful public policy in all levels of my work humanely and with compassion. HKS has strengthened my leadership potential and entrepreneurial spirit, both of which I am confident will add to my future professional experiences.

Elevating the stories of diverse, unsung women, one interview at a time