Lucila Takjerad: Overcoming hardship to find her voice as a public leader

Paying tribute to her mother’s strength, the MC/MPA 2019 graduate will deliver the graduate student oration at the Harvard University Commencement on May 30. 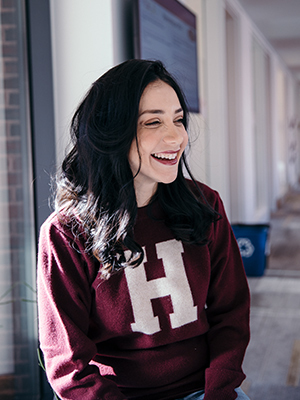 Lucila Takjerad MC/MPA 2019 was 10 years old when she embarked on a journey that would change her life. Fleeing the civil war in Algeria in the mid-1990s, she and her family boarded a boat which would take them to France. Standing on the crowded deck, she remembered seeing her parents cry as they watched their homeland fade into the distance.

“On that day, I learned how to be fearless. I could see the fear in their eyes, but I was not scared, despite being only 10 years old,” she recalls. “Instead, I turned towards the new horizon and, despite not knowing the language, the culture, or the people, I was excited to be going to a new place filled with possibilities. I felt like I was just a boat ride away from what I’d never had: a chance to dream and pursue a better life.”

Lucila’s dreams and ambition would take her far—from life in an underprivileged community to a graduate education at Harvard Kennedy School. And on May 30, Lucila will deliver one of three student orations at the Harvard University Commencement ceremony, sharing the stage with German Chancellor Angela Merkel and speaking before an audience of thousands. But her path to Harvard Yard has not been an easy one.

“In reality, my childhood in France was far from rosy. After three years living in a shelter, my family and I found ourselves living in a sprawling, crowded, broken-down banlieue—what you might call a housing project or poverty trap,” Lucila explains. “My school was overcrowded and underserved. Paris, though just 40 minutes away by train, was like another world, one where people like me faced racism, discrimination, and worse. The dream of any person living in the banlieue was to live outside the banlieue, but far too few expected that dream to be fulfilled.”

Nonetheless, Lucila refused to be defined by her address. A dedicated student, she started working at 16 to help her family pay their bills. After graduating from high school with honors, she became one of the few students from a poor immigrant community to gain entry to one of France’s top Grandes Écoles, which are highly selective elite institutions whose graduates have dominated upper levels of France’s public and private sectors for decades.

“While I escaped the banlieue and built a professional life for myself, I made the commitment to return to the banlieue to help my family and my community,” Lucila says.

After a decade of work in the financial industry, including time spent in London, New York and Abu Dhabi, Lucila felt the need “to breathe again” and renew her commitment to her community. She applied to Harvard Kennedy School, hoping to find a sanctuary where she could think, learn, explore, and plan her next steps.

“Before coming to the Kennedy School, I felt that I wasn’t where I wanted to be. I needed to find my purpose. I needed to find my fire,” Lucila says. “I am extremely grateful for my years abroad, as I built a successful finance career, supported my family, discovered new cultures and ways of thinking, and became a more tolerant and understanding person. Yet, there is nothing more rewarding than helping my people.”

To that end, prior to arriving at Harvard, Lucila led several projects, finding ways to help her people in both Algeria and France. In Algeria, she worked on social and economic policies at a non-profit think-tank, and in France, she led education and entrepreneurship programs to support the residents of the banlieues.

"On commencement day, I will not be alone on stage. I will draw and channel strength from the lives and hopes of the marginalized and underprivileged. I am humbled and honored to be a part of their journey."

Harvard gave her the space to grow, learn, question, and reflect, Lucila explains. Her HKS experience helped her reignite her dreams and aspirations.

“I came to Harvard because I wanted to find some answers, but instead of finding answers, I learned to ask better questions. And to ask better questions, I have learnt how to listen better,” says Lucila, an Emirates Leadership Initiative Fellow. “Harvard has taught me that the key quality of a great leader is empathy. When you are empathetic, you leave room for other perspectives.”

As Lucila composed her winning oration, her mother served as her inspiration: “The person I admire the most is my mom. Her acts of courage have always inspired me. She is my guiding star, in the light or in the dark. Leaving her country with her children for the hope of a better life in a new land took a lot of courage. I wanted to honor her by entering the orations competition.”

Lucila will pay tribute to her mother’s strength and bravery, noting that she took every possible job to feed her children and provide them with opportunities. “Seeing my mom on her feet 18 hours a day instilled in me the values of hard work and resilience”, Lucila says. Although Lucila’s mother never had the chance to go to school herself, she fought to send her daughter to Harvard. And while Lucila was applying to Harvard, she decided to pursue her own high school education, receiving her diploma at the age of 55.

“On commencement day, I will not be alone on stage. I will draw and channel strength from the lives and hopes of the marginalized and underprivileged. I am humbled and honored to be a part of their journey to find voice and purpose in this world”