A passion for learning, communicating, and helping others | Harvard Kennedy School
Skip to main content 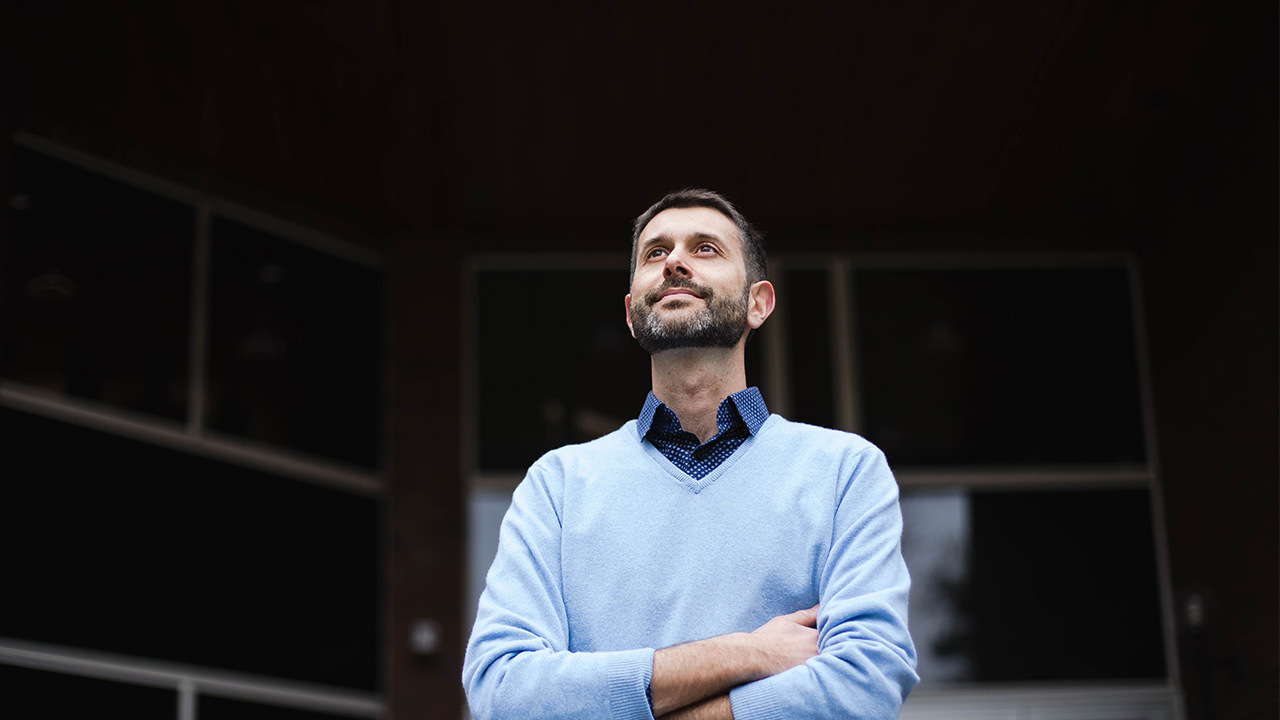 A passion for learning, communicating, and helping others

Mauro Morabito used his language skills for humanitarian service in some of the world’s toughest conflicts—and now he is taking on climate justice.

During a college year abroad away from his home in northern Italy, Mauro Morabito MC/MPA 2022 took 19 courses for credit at three universities in Finland. Two decades later, he was no less passionate in his studies at Harvard Kennedy School: He attended 10 courses in the fall semester alone, many of them focused on global warming and the threats from climate change, while buzzing in a whirlwind of extra-curricular activities from aquatic sports to foraging trips, cooking clubs, and yoga classes.

In Finland, he became fascinated with people’s deep sense of connection with nature and found himself loving the wildlife in the woods near his student housing. In Cambridge, he renewed that passion, thanks to a course he audited at Harvard Graduate School of Design, “Wild Ways: Thinking, Relating and Being with/in Wilderness, Wild-ness and Nature in the Anthropocene.” He found a favorite spot for weekend walks, Middlesex Fells, and a favorite pine tree in John F. Kennedy Park next to the HKS campus and often studied there.  He joined climate action-organizing and sustainability projects as well as the Harvard-wide Climate Leaders Program, “where I felt part of a community pushing Harvard to do more.”

In between these two university experiences, Morabito spent what seems like several careers worth of work pursuing better communication, humanitarian support, and community engagement. And to do it well, he made good use of his love for languages. Many languages.

Morabito first plunged deep into Russian, Arabic, and Japanese, auditing courses at the University of Bologna’s interpreter school, alongside his own studies in international development. He made his way to Brussels in 2007, working in communications and fundraising for the peace-building sector, and built a successful second career as an interpreter for the polyglot European and international organizations concentrated in the Belgian capital. 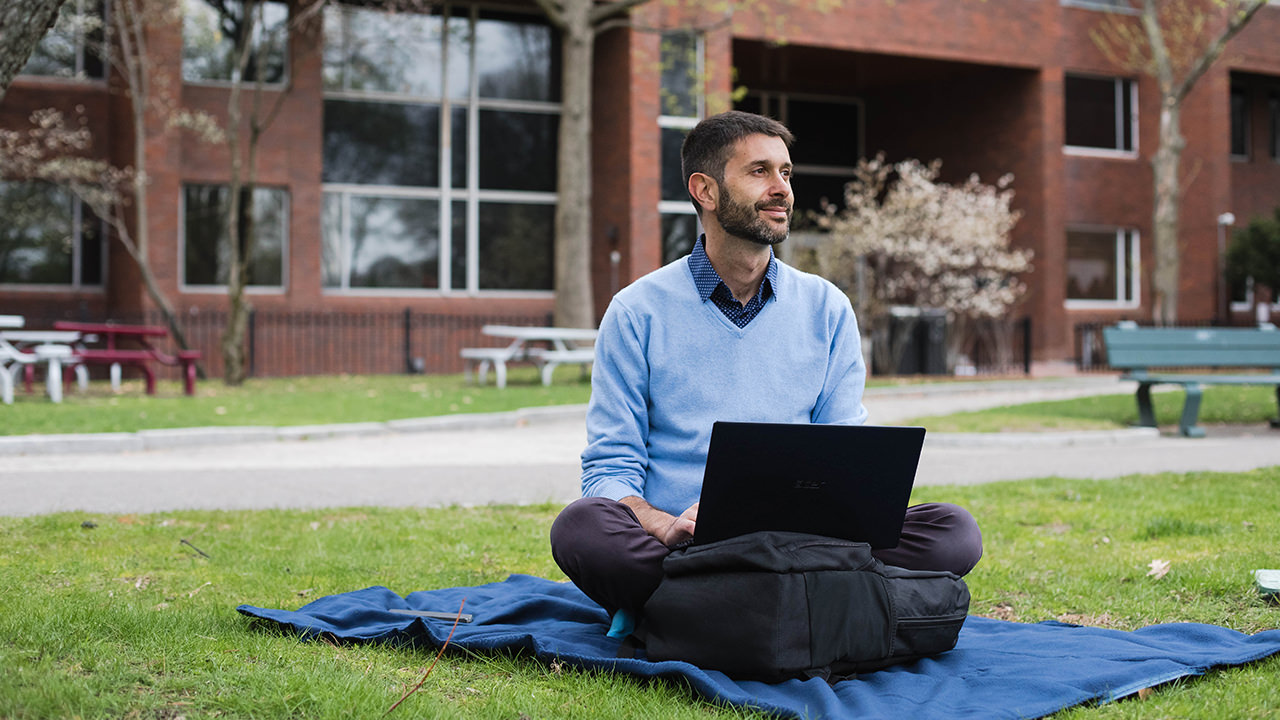 How many languages does he speak? Morabito pauses, knowing it is not a simple answer. “Six or seven,” he says, depending on what you mean by fluent. “I can understand and communicate in 10 or a bit more,” to different degrees of proficiency. A passionate book lover, he says reading helps him with keeping his languages alive. “There is a wealth of registers and a richness to the written word that goes beyond spoken interaction. Reading for me is a preparation to better listen,” he says.

He spent his last three years in Brussels organizing interpreters and doing interpreting in conferences around Europe, primarily in Italian, English, French, Spanish, and Russian. “What I was doing was very interesting, looking behind the scenes of so many industries. It was intellectually challenging, and a full gymnastics of the mind, but I knew it was a parenthesis,” he says. “I was looking to go back to exploring humanity. I felt a thirst to be useful, to contribute to change—to see concrete results, and maybe to understand what it means to be human, especially in the midst of conflict and war, deprived of the liberty and protection we enjoy in our daily lives.”

He took a job in the Central African Republic for Doctors Without Borders in 2009, where he had a kind of awakening: “I was a young, French-speaking white man, in charge of human resources, finance—and disciplinary proceedings.” He says, “it just felt wrong and jarring, and an occasion to start unpacking my relationship with colonialism and inequities, and to contribute to inclusion.”

That insight prompted him to join the International Committee of the Red Cross, and he held ICRC posts over the next decade in Kyrgyzstan, then back in the Central African Republic, and in Chechnya, Dagestan, and Kabardino-Balkaria, where he was caught up in the crisis in nearby Ukraine. He also worked in Abkhazia and Tbilisi in Georgia, and spent his final two years based in Rwanda.

Morabito led large teams, negotiated humanitarian access and delivery of humanitarian aid, putting communities at the center of his work and fostering accountability. “Accountability to affected population as a framework and a principle of humanitarian action has always been central for me, since my first time in the Central Africa Republic,” he says. “The power asymmetry between foreign organizations, local stakeholders, and communities needs to be made explicit for programs to be relevant, inclusive, and accessible.”

His first and last ICRC missions revolved around penitentiary and criminal justice systems, and he speaks movingly of what he calls the ICRC’s unique role in supporting prisoners throughout the world, often suffering in harsh conditions. The ICRC’s signature “Interviews Without Witnesses”—one-on-one meetings between an ICRC delegate and a prisoner designed to give prisoners the chance to speak freely about what matters most to them, while the ICRC delegate can collect information to improve detention conditions and treatment—have been “critical to my journey of humanity,” Morabito says.

“Private interviews and dialogue with authorities are a cornerstone of the ICRC approach. A detainee and an ICRC delegate sit next to each other and talk undisturbed. It’s a profoundly humane and possibly transformational moment,” he says. “There is a unique chance of dialogue that goes both ways.”

Morabito says, “I felt I had reached what I sought. Being on the receiving end of hundreds of personal stories, working with our teams, the detainee population, prisons directors, and the criminal justice sector felt both humbling and empowering. It was also the intensity and depth that drove me on my journey, and the chance to make a difference.

“What I was doing was intellectually challenging, but I knew it was a parenthesis. What I wanted to do was more connected with exploring humanity. There was a thirst to be useful—to see concrete results.”

Morabito was among the few ICRC staffers to enter Luhansk, in eastern Ukraine, from the Russian side during the first fighting there in 2014. He helped organize humanitarian assistance and re-establish family links while bombs were falling. He helped deal with some of the two million displaced Ukrainians who ended up in Russia during that conflict.

By then, Morabito says, he found himself wanting to be part of a community, with family and friends, “to pursue a citizen’s dimension in my life, developing deeper and long-lasting ties with a place.” He wanted to continue his career in a way that was more balanced and focused on environmental policies and the public sector.

He had come to the Kennedy School in 2018 for the “Leadership Decision Making” executive education course and knew that he wanted to return. “I started incorporating some behavioral change tools in my work on the field, learning about environmental justice and focusing on the central role of government and institutions in advancing the public good.”

His mid-career cohort was the first to experience a leadership module during the summer orientation that explored themes like critical race theory, intersectionality, and abolitionism, and he kept up that focus with courses such as “The Causes and Consequences of Inequality.” Increasingly, he looked for ways to advance climate justice and sustainability. Morabito served in the leadership of the HKS Climate, Energy and Environment Caucus as sustainability office liaison, maintaining the link between the HKS senior sustainability manager and the student population.

With ten of his fellow mid-careers, he co-developed Harvard’s first initiative to “Graduate Carbon Neutral,” led by Rym Baouendi MC/MPA 2022, with each student calculating and volunteering to offset their emissions. “Harvard has significant climate goals for 2026, 2030, and 2050,” Morabito says. “And, as we have seen in the Fossil Fuel Divest campaign, students and alumni are central to keep pushing for more. What we want to show is that we, the 2022 mid-career class, are deeply concerned by climate change and want to do all that we can to be part of the solution and lead by example.”

Morabito earned Kennedy and Pforzheimer fellowships to support his HKS studies. He says he loved the flexibility of the mid-career program, which enabled him to create his own curriculum built on climate science, environmental justice, agroecology, and cities’ sustainability, taking classes at the Law, Business, and Design Schools.

In the Climate Change Living Solutions Lab, hosted by the Emmett Environmental Law and Policy Clinic at Harvard Law School, he worked with a team from four schools to develop tools on dual land use (photovoltaic panels and agriculture, known as agrivoltaics) for a tribal nation in northeastern Oklahoma. “It was the perfect transition from my international work on humanitarian accountability and resilience to community engagement in the climate change space, and it was especially significant to learn more about environmental equity in the United States with a Native tribe invested in indigenous climate leadership.”

Just as he did in Finland, he bikes everywhere in Boston, “snow or shine,” and recalls the Finnish delight in “ryska,” the word used to describe the evolving autumn color explosion. He professes to love Boston’s weather: “Every day looks like a gift, with the changing of seasons, and even in winter, the blue of the skies is breathtaking.”

Morabito plans to stay in Boston along with his family for the long term, and to press forward with work that advances environmental justice and equity. From childhood, he says with a laugh, “I was the nerdy one switching off everyone’s lights.”

He is confident that his 15 years of humanitarian action, community engagement, and international communication experience will help him transition into environmental equity work. “The how of a green and just transition is what attracts me now,” he says. “It is what we owe ourselves and our planet, to work for climate change mitigation and adaptation with a more holistic view of well-being and planetary health. Ultimately, it’s what I feel I learned in my humanitarian journey, thanks to the respect and dignity I found in those most affected by conflicts or deprived of liberty—the same respect and dignity for all facets of life that I want to continue to explore and contribute to.”