Amanda R. Matos MPP 2019 takes pride in her New York roots and in her commitment to public service.

Raised in the Bronx, Amanda R. Matos MPP 2019 is very proud of her roots. As Matos puts it, with the election of Alexandria Ocasio-Cortez to Congress and the success of entertainer Cardi B, New York City’s northernmost, and often most maligned, borough is having “a moment.” But Matos had always believed in her community, giving back through the creation of The WomanHOOD Project, a nonprofit she founded that teaches leadership to young women of color like her. 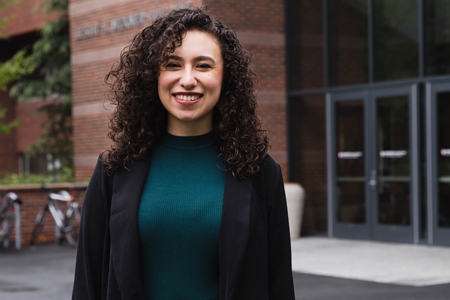 “The Bronx doesn’t always have the best reputation,” Matos said. “The majority of Bronx residents are poor or lower-middle class, and many of us are people of color and are immigrants. We’ve been forgotten and our communities under-resourced. I didn’t realize the opportunities I was lacking when I was growing up—which is true for many of us.”

By her own admission, Matos was fortunate to have had more opportunities than most young people in the Bronx. Through her hard work, she was able to attend Columbia University—the first person in her family to attend college right after high school, and an Ivy League university at that. But Matos notes that she was also extremely lucky. At the time she applied, the Ivy League schools had increased their financial aid to needy students. “It’s not just about working hard, but also having the financial resources to support you,” Matos underlined.

“When I got to Columbia, I realized that I became privileged and was fortunate to benefit from so many of the school’s resources,” Matos said. “That is what led me to create The WomanHOOD Project. I wanted to help younger women coming up in the Bronx. I wanted them to be proud of their culture and history and to learn how to succeed and be strong.”

Established by Matos in 2012 when she was just 20 years old, The WomanHOOD Project partners with Bronx high schools on after-school programs serving girls of color. As conceived by Matos, the curriculum focuses on elevating the work and contributions of women of color, emphasizing collective learning experience and community activism. The project’s curriculum was created by other women of color all under the age of 30, with the goal of helping girls build their confidence and skills for a successful future.

Matos served as WomanHOOD’s executive director, shifting to the organization’s board as she began her studies at HKS. She now works with the organization’s current leadership on creating a sustainable development plan to ensure that WomanHOOD will continue its important mission for years to come.

But that was only part of Matos’s work. Following her graduation from Columbia, Matos began her career in public service, working as a community organizer for Planned Parenthood of New York City and later with Girls for Gender Equity and the New York City Council in creating the Young Women’s Initiative—the nation’s first municipal effort focused on supporting young women of color by creating policy, legislative, and funding recommendations. Through these experiences, Matos realized early in her career that data can often be used against the communities she cares about and wanted to strengthen her own analytical skills to more effectively represent communities of color in political leadership.

“Everyone at the Kennedy School has been real and honest. The faculty have been great and the exposure to visiting fellows invaluable…These are connections I’ll have for the future as I build my career and try to make this a better world.”

While at the Kennedy School pursuing a Master in Public Policy, Matos received a Sheila C. Johnson Fellowship in the Center for Public Leadership, which supported her long-term goals to end disparities in African-American communities and communities of color.

“I wanted to learn more about social justice and public leadership. The Johnson Fellowship aligned with my work in the Bronx and my future plans,” Matos said. “The fellowship and the amazing people in CPL have enhanced my skills as I prepare to launch what I hope is a life-long career in public service.”

Matos went on to say that she had not expected to find so many committed, passionate colleagues when she arrived at Harvard. She appreciated that so many of her peers were both down to earth and eager to build a community within HKS.

“My friends and I care about social justice and public service,” Matos said. “In my Johnson Fellowship cohort, we have supported each other throughout our two years at the Kennedy School. We look at ways to effect change, even within HKS. We all want to make the world better. Everyone here has been real and honest. The faculty have been great and the exposure to visiting fellows invaluable. My most memorable classes and study groups have been with [Adjunct Lecturer in Public Policy] Timothy McCarthy, [Professor of History, Race, and Public Policy] Khalil Muhammad, [IOP Fellow and former Tallahassee] Mayor Andrew Gillum, and [Shorenstein Fellow] Maria Hinojosa. These are connections I’ll have for the future as I build my career and try to make this a better world.”

“I know the Bronx’s ‘moment’ is not temporary, and I want to make it permanent,” Matos said, reflecting on her future in public service and the foundation Harvard Kennedy School provides. “After graduating, I plan to serve my communities, advocate for social justice, and be a public servant. Harvard Kennedy School helped me sharpen my knowledge and skills to continue being a bold progressive for social change.”