Maria Soledad Rueda MC/MPA 2019 has aided famine victims, protected political prisoners, and lived through deadly conflicts on three continents during a decade of humanitarian work on her way to Harvard Kennedy School. But she found her inspiration for a life of service and learning just down the street from her childhood home, at the nearby orphanage and school founded by her grandmother and run by her mother. 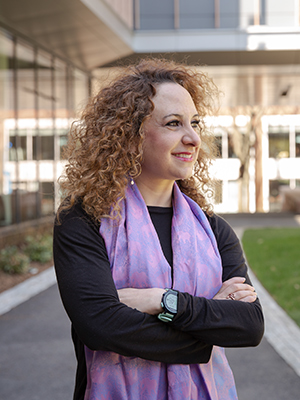 Rueda, who goes by Sole, drew her inspiration from the service that these maternal mentors offered the people of their hometown of San Gil, Colombia. She recalls watching with admiration as her mother Julieta emerged from a troubled marriage to begin practicing medicine at the age of 42, adding a specialty a decade later so she could better serve those who had grown up in violence and poverty.

With such powerful “generational role models,” as she calls them, perhaps it was inevitable that Rueda would embrace a path of service confronting war and hunger across the world.

“I believe profoundly and in the deepest part of my soul, that as humans we can be good for one another,” Rueda says. “And I mention this not out of naiveté but out of experiences that have left scars. Each one tested me in physical and emotional ways I never expected. Those humbling opportunities also proved to me how inspiration, insight, and integrity can be the drivers for one to serve and believe in our shared humanity.”

After university in Bogota, she scored an internship with a United Nations agency to work with indigenous women in the Embera-Wounaan matriarchal community in the most remote corner of the Americas—the Darien Gap in Panama. She also spent time with a nonprofit documenting Colombian civil war massacres and child recruitment by armed groups.

Then, equipped with a master’s degree from the Graduate Institute of International and Development Studies in Geneva, Rueda joined the United Nations High Commissioner for Refugees and was immediately sent to Somalia during the 2011 drought. She lived on the Ethiopian border, aiding people who had walked for months to escape hunger. Eighteen months in South Sudan followed, working with victims of the brutal civil war there.

She then joined the International Committee of the Red Cross, attracted by its humanitarian principles, independence, and commitment to reach victims in the world’s worst crises. She was first posted to the Central African Republic to visit prisoners who lived in horrendous conditions. She narrowly survived a violent coup, managing to be evacuated to Cameroon amid the fighting. The ICRC transferred her to Myanmar, where she visited political prisoners. Then she was sent to Liberia for nearly eighteen months—at the time of the Ebola outbreak.

"I believe profoundly and in the deepest part of my soul that as humans we can be good for one another. And I mention this not out of naiveté but out of experiences that have left scars. Each one tested me in physical and emotional ways I never expected."

In each move, the ICRC promoted her to a more senior position. In 2016, she was posted to the Gaza Strip, where she negotiated between Palestinians and Israelis for nearly two years. She was on the job there until 10 days before she traveled to Cambridge, in May 2018, to begin her mid-career program at Harvard Kennedy School at the age of 36.

Reflecting on her career choices, she says: “I choose conflict because even during war and violence, when we can act in the most horrendous way, I could witness also the best and most genuine form of humanity; we are all the same. In all these years, hope and empathy have guided my path; they were sources of energy and essential tools for action.”

Arriving at the Kennedy School, Rueda “got a precious moment of self-reflection, to take the things I had accumulated and go deep inside, to step back. At the beginning, it was hard to confront images of violence. Now I feel so light again. I learned a lot, but it also offered me a healing process I hadn’t expected.”

Receiving a Harvard scholarship enabled her to attend. “Harvard is not impossible,” she says. “It’s about the will and the dreams that you have.”

An Edward S. Mason Fellow and a Center for Public Leadership Fellow, Rueda is also the class representative on the student council because, she says, “service starts where you are—you don’t have to go far.”

Rueda used her time at the Kennedy School to focus on management and negotiation courses to prepare her for leadership positions in regions where the need is greatest. With her first-hand understanding of the consequences of armed conflict and violence, Rueda imagines a future working in the field of conflict resolution and mediation to promote peace.

But before she heads back to a next foreign posting with the ICRC in November, she and her mother, now 67, will fulfill a “hairy dream.” They will train for several months back home in Colombia—and then they will go to Nepal where they will make the seven-day trek to the base camp of Mount Everest.