Seeing the trees and the forest

P Vaidyanathan Iyer MC/MPA 2018 took a step back from the tyranny of deadlines and the chaos of the newsroom to examine some important truths.

Being a top journalist at one of India’s most influential (and feistiest) dailies is an all-consuming affair, with stories to run down, front-page space to fight for, deadlines to meet. For P Vaidyanathan Iyer MC/MPA 2018, the luxury of the Kennedy School has been not only to breathe in new knowledge, but also just to breathe. 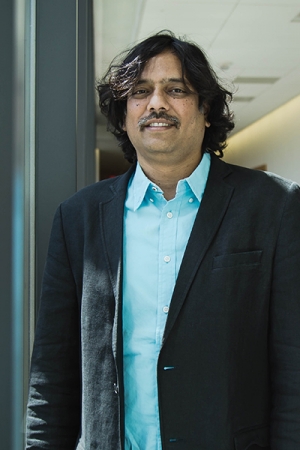 Iyer, an investigative journalist and national affairs editor at The Indian Express, had been going non-stop for a couple of decades. His latest and perhaps greatest success came as he helped lead his newspaper’s award-winning coverage of the Panama Papers, an international investigation based on the leak of more than 11 million documents that detailed how the rich and powerful (and infamous) hid their wealth using a system of secretive offshore companies.

“The tyranny of work, the tyranny of being in the newsroom and doing routine work ... I had to take a break,” says Iyer, a Mason Fellow. “I wanted to read up a lot. I wanted to listen to people at leisure. I want to just reflect on 15 years of work that I have done.”

His year at Harvard has been the fulfillment of a long-held dream that started in an unlikely place. Iyer grew up in a provincial city in central India, his father a stenographer with the Indian railways who also worked a second job to put food on the table. And Iyer had to put his love of writing and journalism aside to pursue the more sensible (and parentally acceptable) goal of an engineering degree. The year has also allowed Iyer to learn important new skills, gain valuable insights, and think more deeply about the projects he would like to embark on after he returns to India.

“For me the best part has been getting to know a lot about my shortcomings—the many blind spots that I've had,” Iyer says. “Like how we jump from one conversation to another, for instance. We are sitting in a leadership class and one of the classmates has just shared her story about sexual abuse as a child. Her eyes are moistened and she's on the verge of tears and she hasn't even stopped, and then somebody else is talking about race! This whole tendency of just shifting from one conversation to another, it just mirrors my journalistic life-cycle. Every day is new news. And I think this whole tendency of jumping from conversations to a large extent mirrors what's happening in our society as well.”

Iyer says he has also been able to read deeply—a luxury he rarely had before when his reading time was limited to other journalism or primary sources—and think broadly about big issues like leadership and democracy.

“I realize that this transition from, say, democracy to semi-authoritarianism can be either creeping or come at one stroke,” Iyer says. “Leaders acquire powers gradually and when you take those incremental steps towards becoming a more powerful leader, people don't even realize it. And then there comes a day when [that leader] can change the constitution. So, you need to be much more vigilant.”

Iyer has used his expertise on the intersection of the public and private sectors in India to work with Senior Lecturer in Public Policy Michael Walton on a research project on state-business relations. And he has been able to give more thought to a hoped-for project he would like to launch dedicated to bringing more members of India’s dalits (the so-called “untouchables”) to journalism.

In the end, journalism will continue to be central to his life. But Iyer recognizes that the Kennedy School has allowed him to think and listen in a clearer and more principled way, even if it will be in the din of editorial meetings and fierce newsroom debates.

“If you don't take a high moral or ethical ground, then I don't think that you'll really make any change,” he says.

Will he be going back to the newsroom a changed man? “I think I will be a better human being,” he replies.