A softer approach to economics

As director of economic studies for Buenos Aires Province in his home country of Argentina, Isidro Guardarucci MPA/ID 2018 had reached a point in his career where he wanted to build on his skill set. He applied to Harvard Kennedy School to hone his technical and analytical expertise, thinking they would add most value to his work. But as it turns out, the economist discovered something unexpected to complement his already considerable toolkit: soft skills. 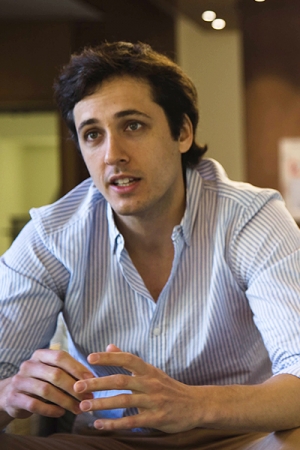 After graduating in May, Isidro plans to return to his government unit with the soft and hard skills to help advance a topic he is passionate about: tax reform and fiscal relations between the national and sub-national governments.

We sat down with Isidro to learn about his HKS experience and how it has influenced his approach.

I have always been interested in public service, working as an economist and economics professor in my home city of La Plata. I love economics and teaching it in the classroom. For me, these are ways of giving back. But I wanted to learn new skills, a different point of view, and new ideas to take back to my government.

What was offered in Argentina was more traditional. The experience I could find at HKS was not typical in my home country. I knew some HKS alumni who recommended the MPA/ID Program and I thought the best strategy, for me, would be to study abroad.

What are some of the most valuable skills you have learned?

I’m an economist—everything is about technical skills and math. While I was at HKS, I realized my soft skills, like communication and negotiation, were not as strong as they could be. I had anticipated taking a negotiation class, but hadn’t really thought about other soft skills. I came to understand they could be useful in many dimensions in public policy and public administration, and in life.

Steven Jarding’s course The Making of a Politician is amazing. It was worth the whole degree just to take this one course. In my first semester at HKS, at the recommendation of a classmate, I took a workshop called Effective Public Communication that was led by Professor Jarding. After the workshop, I knew I had to take a whole semester of it.

How do you see yourself applying some of those soft skills?

I go back to Professor Jarding’s course. It’s called The Making of a Politician, but it’s really about communication—and we communicate in every part of our lives.

When you face a superior or your team, when you have to explain something to an outsider, or even with family, I learned that communicating is not just about what you want to say, but also about how others understand what you have to say.

It’s also important to recognize the other side’s point of view. I learned this in my negotiation courses. Both sides may have different interests, and both can be “correct.” We cannot impose what we think is correct—we have to understand each other’s thinking and points of view.

In my career, I have worked mainly on tax reform and fiscal relations between the national and sub-national government. It’s a huge issue and something I’m very passionate about. My province is very large—almost 40 percent of Argentina—but it is allocated national resources at only 17 to 18 percent. It has been discriminated against for years, which has major implications. My province used to be wealthy compared to the rest of the country, so it was assumed that the “rich” province could take care of itself. But it’s largely misrepresented. If you look at economic indicators, it’s actually below the mean of the country. Since it’s such a large province, we are under-represented compared to smaller provinces. We don’t get a proportional deal. We receive fewer resources, so the public education is worse and the environment looks run-down. It affects our quality of life.

Before coming to HKS, my main contribution had been more technical. As head of research, I was charged with trying to frame this imbalance with technical information and tools so the government could understand the inequity.

After learning new skills at HKS, I think I can reframe it in a more impactful way—using some soft skills—to make clear the political dynamics and that it’s much broader than a conversation about fiscal resources.

What are some other highlights of your HKS experience?

A couple of courses really stood out for me.

Akash Deep’s course Advanced Risk Management and Infrastructure Finance is extremely technical and practical because it’s not always about soft skills. I learned many lessons in the field of finance that will be useful for analyzing investment projects.

Ricardo Hausmann’s Development Policy Strategy offers economic insights and comprehensive frameworks to analyze economic development. He is one of the best speakers I've ever heard.

And while working on my Second Year Policy Analysis (SYPA), I had a chance to collaborate with my section leader Carmen Reinhart, which was among my top experiences at HKS. I had the chance to discuss policy and get her advice during our weekly meetings. I would read her papers back in Argentina—she was kind of a rock star to me. And now at HKS, I found myself learning from her directly. It was yet another unique privilege of being an HKS student.

Do you have any advice for incoming students?

Think well advance about the courses you will take. You might think two years is a long time, but it’s actually very short! The Harvard menu is huge.

And make sure to take Steven Jarding’s course. It’s a must.

Don’t underestimate the value of multidimensional skills. Combining soft and hard skills is the best way to understand and make an impact in public policy.

Recognize the value of listening and learning from others, not only from faculty members but also from your classmates. The people I met during my time here, being on campus and meeting people from different backgrounds—it has been amazing. HKS encourages us to meet not only people from the school, but across Harvard and the wider community. It’s about cross-collaboration. This approach is invaluable.