The son of Latin American immigrants, Hainer Sibrian MPP 2020 is about to launch a career as a U.S. diplomat.

Hainer Sibrian MPP 2020 grew up in Los Angeles and Atlanta as the son of struggling immigrants. His father left El Salvador in the 1980s after becoming involved in a leftist guerrilla movement; his mother was a migrant domestic worker from Mexico. That heritage helped draw him to another flashpoint—embattled Egypt during the Arab Spring—en route to a career as a U.S. diplomat.

Sibrian’s eventful path included more than one surprise. His ROTC scholarship to Tulane University was upended during his freshman year by the federal budget sequester, forcing him to return home and enroll at Georgia State University. For his senior year in 2012, he landed a prestigious scholarship to study a foreign language abroad in 2012. At the American University of Cairo, he recognized the same unrest, democratic ambitions, and thwarted dreams that had gripped Latin America in his father’s youth.

“A lot of what I understand about the world is shaped through the perspective of the Salvadoran civil war and my father’s experience in it,” Sibrian says. “I chose to study Arabic because I was seeing U.S. policy in the region taking on a character that seemed to mirror in a lot of ways the actions that were taking place in Latin America in the 1980s.”

His parents’ early lives held few such opportunities. His father lived in a car with his cousin after arriving undocumented in Los Angeles, and his mother cleaned offices and hotels while Sibrian and his siblings played on the tough streets of East LA. Fortuitously, his father moved the family to the Atlanta suburbs so he could take a job installing hardwood floors, which he built into a successful business. But Sibrian was always aware of his minority immigrant family status, and he increasingly focused on issues of inequality and opportunity, at home and in the world.

He recalls a lesson from his adolescent years in Atlanta, when he took part in Christian athlete fellowship programs. He remembers learning from the prayer of Saint Francis that “we shouldn’t seek to be understood, but more so to understand…. It’s better to use interventions and speaking tools that people can understand—instead of crying in a way that demands you to be understood.”

Sibrian went to Egypt as a Boren Scholar, named for David Boren, the former Oklahoma governor and U.S. senator who built programs to increase American expertise in foreign languages and cultures as a key to improving U.S. security and understanding of other cultures.

Sibrian saw the Middle East as a region “consistently regarded as expendable by the powers that be, in particular by the United States, where the focus was almost linearly counterterrorism.” And he concluded that “the costs to the populations in Iraq and Egypt were not going to be different from what was going on in Latin America.”

The Egyptian experience prompted Sibrian to pursue jobs in international democracy promotion in Washington. He worked for The Project on Middle East Democracy, which supports strengthening voices that promote democratic principles in the region. He moved on to a job with the National Endowment for Democracy, a bipartisan nonprofit that provides international grants funded by the U.S. Congress through the State Department. As a State Department contractor, he managed multi-million-dollar funding, including the entire European assistance portfolio.

Sibrian says he realized that he needed to combine his ingrained passion for fostering genuine democratic change in the world with deeper skills in project management and negotiation, so that he can deliver results for people, and not just criticize shortcomings. 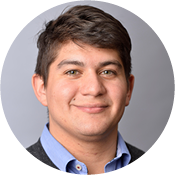 “I hope to have conversations as a political officer with country counterparts that help uphold the scaffolding of liberal democracy.”

So he made his way to the Kennedy School in 2018 through a Thomas R. Pickering Fellowship, which prepares students for U.S. Foreign Service careers. He will be commissioned this fall as a foreign service officer in the State Department.

“I hope to have conversations as a political officer with country counterparts that help uphold the scaffolding of liberal democracy,” Sibrian says. “It doesn’t necessarily have to be everything they want, but just getting them to a place where the people feel represented, heard, and feel that they live in a system that is just.”

At the Kennedy School, he found teachers who he felt lived out those ideals—including Nicholas Burns, the Roy and Barbara Goodman Family Professor of the Practice of Diplomacy and International Relations and former State Department under secretary for political affairs. Sibrian said Burns’ course was a perfect pairing with one taught by William Rapp, a lecturer in public policy and  former U.S. Army major general, on what happens when diplomacy fails: “what are the options then to get people to be understood or to get folks to understand? And what are the limitations of that? I thought that was incredibly helpful.”

During his two years at HKS, one class stands out as especially eye-opening. Taught by Tarek Masoud, Professor of Public Policy and Sultan of Oman Professor of International Relations, the course was called “Getting and Keeping Democracy.”  Sibrian says the class “laid down an explanation for what I was doing for the past five years.”