Vidya Neelakantan MPP 2019 was drawn back to the world of national security, but with a broader view.

The assigned reading was an article on the U.S. government decision making during the Vietnam War. It painted a picture of an insular world—all-white, all-male, exclusive, and secretive. Her classmates were depressed. Vidya Neelakantan MPP 2019 was relieved. 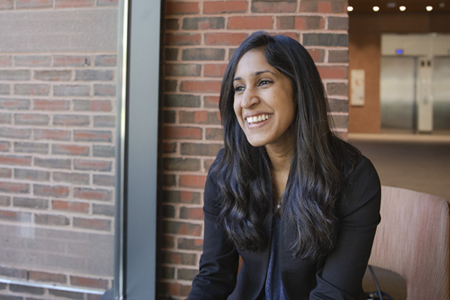 “That's not how it looks anymore—it looks like me,” says Neelakantan, the daughter of Indian immigrants, who came to the Kennedy School after five intense years working on counterterrorism for the U.S. national security establishment. “It looks like people who don't just view what's happening abroad as numbers or a power struggle, but who view it in terms of people because they've been there or had family there.”

Neelakantan’s time at Harvard Kennedy School gave her the opportunity to experience the simple, pure joy of learning, but also to reaffirm her commitment to national security as a calling and a career, and to explain that world to others who may view it with suspicion or hostility.

It was a world to which Neelakantan came with determination but difficulty. Born in Atlanta, Georgia, to Indian parents who had moved to the United States to finish their graduate studies, she moved back to India while still young when her father was called back to take over the family education business. (She and her sisters defiantly held on to their Southern drawls despite the constant teasing.)

She returned to the United States to attend Wesleyan University in Connecticut, a liberal bastion not known for its proximity to the national security apparatus. But Neelakantan was interested in counterterrorism. Growing up, it had seemed to be an almost constant presence in the world around her—from the conflict in Kashmir, to the attacks on 9/11 and in London in 2005—and she began feeling a sense of responsibility to confront it head on.

There's a view that national security and human rights have to live on different sides and I just don't see it that way. I'm in it because of human rights.

“I felt this fundamental tension,” Neelakantan says. “There's a view that national security and human rights have to live on different sides and I just don't see it that way. I'm in it because of human rights. ... People think of terrorism as the Twin Towers falling. As horrible as that was, those weren’t the only people that were affected by it. It's also young children and women in Iraq, Pakistan, and elsewhere who are the victims of this systemic problem.”

Graduating from college in 2009, at the height of the Great Recession, she took a job as a paralegal with the Department of Justice and began a three-year process of breaking into the world of national security.

Graduate school was always in the cards, but it was a question of choosing the right moment. “I had worked on counterterrorism and it’s emotionally draining,” Neelakantan says. “It's crazy days, unpredictable hours. ... I wanted to [attend graduate school] when I had a little bit of experience but not so much that I was so entrenched in my ways.”

The national security community promotes the idea of moving on to a new subject area every few years but when she arrived in Cambridge, Neelakantan was seeking more than a new specialization. “I just wanted to be a student again, where the purpose is not to perform but just to see what else is out there that you don't know about,” says Neelakantan, who was a recipient of the Harvard Presidential Scholarship and the John F. Kennedy Fellowship. Despite being exposed to a range of other issues, she found that she was drawn back to national security and international affairs, and realized that encompassed a lot more than just counterterrorism.

Neelakantan was a teaching assistant for both Ash Carter, former defense secretary and Belfer Professor of Technology and Global Affairs, and Meghan O’Sullivan, a former deputy national security advisor and Kirkpatrick Professor of the Practice of International Affairs. She also conducted research with Rolf Mowatt-Larson, Senior Fellow and Director of the Belfer Center’s Intelligence Project. The faculty and fellow provided not only guidance but also inspiration—continuing to evolve and expand their fields of expertise after reaching pinnacles in their careers. “Even at that level, they're still constantly learning and marching to the sound of the guns,” she says.

The School tested Neelakantan in a different way. She was challenged for having worked in the opaque national security establishment; sometimes she was on the receiving end of hostile comments. But she feels she has made progress in helping convey her world. “I think we got there,” she says. “I've had a lot of great experiences with people just saying, ‘Explain this to me.’ [And] I had to move from simply being defensive about it, to saying, ‘Okay, the lack of trust in the national security establishment is a real problem. I have to own it and then try to start fixing it.’”

Neelakantan will return to her job following graduation where she will focus on great power conflict. She will strengthen her international affairs bona fides, hoping for an active foreign policy role where she will be able to shape policy discussions. But, she says, that’s “several steps away.”  For now, she will focus on doing her job, and urges her classmates to join her in government service.

“We need talent on the inside,” she says, “to make the country better.”