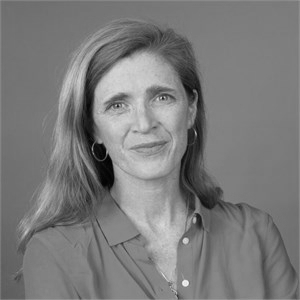 Words tend to fail us most in two circumstances — in the face of profound evil and of transcendent decency. When Elie Wiesel first tried to describe his experience in the camps, he later wrote, “I watched helplessly as language became an obstacle.” We who have the honor to speak about Elie have the opposite challenge, finding words that capture the fierce and magical essence of this marvelous man. Elie gave friendship with the intensity of a young man fresh out of college — with innocence and adamant conviction that that friendship would be an eternal bond, which, in Elie’s case, it usually was. He used to quote someone who said in French, “Ma patrie, c’est les amis.” “My friends are my homeland.”

Power, Samantha. "Why Elie Wiesel's 'Night' Still Matters so Much to Me – and All of Us." Forward. September 12, 2017.
Copyright © 2020 The President and Fellows of Harvard College.