How to boost turnout and what happens after: The obstacles to, and consequences of, increasing voter participation | Harvard Kennedy School
Skip to main content 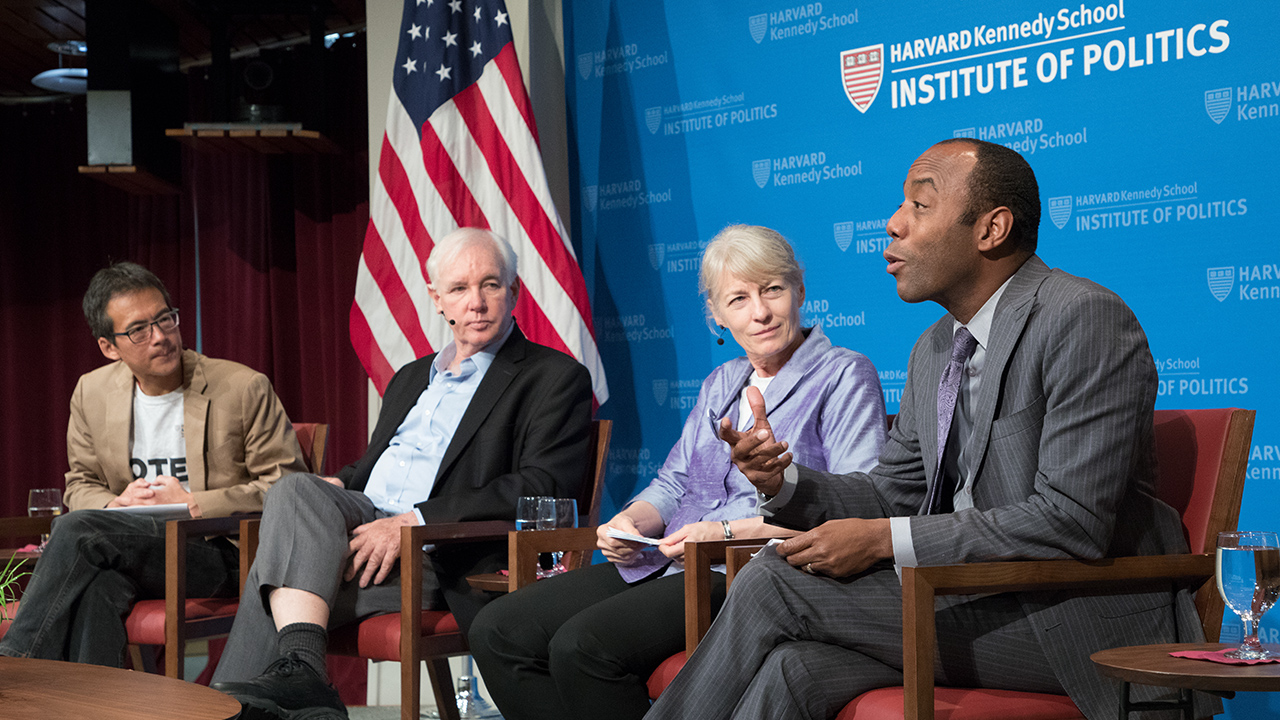 How to boost turnout and what happens after: The obstacles to, and consequences of, increasing voter participation

Democracy experts at Harvard Kennedy School talk about what’s needed to increase voter turnout in the United States, and what that could mean for the country’s politics.

Americans don’t turn out to vote very much. In world rankings of political participation, the United States lives in the bottom third, with about 55 percent of those old enough to vote actually casting ballots in the 2016 elections. There are many explanations, including disenfranchisement, suppression, and apathy. But can you rock the cradle of democracy a little and get many more people to vote? And what would the consequences be of a much fuller participation by citizens? Amid a nascent national campaign to get voter turnout to 80 percent (and a challenge launched by Harvard University students to get student registration to 90 percent), four leading experts on democracy tackled those questions at the John F. Kennedy Jr. Forum on Tuesday. The panel was moderated by Archon Fung, Winthrop Laflin McCormack Professor of Citizenship and Self-Government, and included Cornell Brooks, professor of the practice of public leadership and social justice, Kathryn Sikkink, Ryan Family Professor of Human Rights Policy, and Alex Keyssar, Matthew W. Stirling, Jr. Professor of History and Social Policy. They discussed the deficit in voter participation, policy issues like the disenfranchisement of felons, and the lack of a sturdy civic infrastructure around voting, such as the absence of a dedicated holiday for national elections. They also discussed the importance of norms and the creation of a culture where everyone’s voice is heard in full.

Can We Get Everyone to Vote? What Would Happen If We Did?

“Low turnout in American elections is a 20th century phenomenon. The moonshot-80 percent figure was consistently achieved from the 1850s into the 1890s. ... So the question is why? Did everyone just suddenly get inoculations that said don't vote? Of course, the story is complicated but I like the simple version which is that ... third parties get driven out of American political life. ... Our low turnout was in a sense the creation of our party system.”

“Voter suppression is a conscious and collective and well-orchestrated set of policies. It is not an accident. ... Because voter suppression is conscious and well-orchestrated we have to find a well-orchestrated response and that response cannot only be, ‘The government needs to do this, the parties need to do that, but we ourselves don't have a responsibility as well.’ Of course the government needs to do a lot, of course political parties have big responsibility, but the voting problem in our country is a structural injustice, and all of us connected to that structural injustice and able to act need to take action.”

“We have to get beyond using strategies like the Voting Rights Act only. Changes in civic culture only. Automatic voting only. We have to begin to think about universal voting. How do we create an affirmative duty by the government to get people out to vote? … So we've got to go beyond establishing the minimum to create the civic maximum. That's where we have to go next. ... We've got to go beyond simply eliminating barriers to actually creating an architecture of inclusion as opposed to the civic architecture of exclusion.”

“One of the reasons I'm really excited about Harvard Votes Challenge is that a lot of people feel like electoral participation is up to government or the political parties. Imagine a world in which every organization really thought it was its civic responsibility to get people to vote, in which every university sought to register all of its students, every company sought to register all of its employees and all of its customers. ... So this is a spur to ask what you can do to increase voting, both very locally, here on campus, in Cambridge and Massachusetts, but all over the United States.”

“[Campaigns] don't poll everybody, they poll people who are considered to be likely voters—if you voted last time or the last couple of times you're a likely voter. So those are the people whose policy preferences or policy concerns are factored in to the programs and campaigns. If you're not a likely voter you don't get factored in. ... Just imagine if we got to 80 percent—what that would do to the kinds of issues and the kinds of campaigns that would have to be run in this country. We also know, by the way, that there's a broad pattern that the higher the level of turnout, the more policies are redistributive.”

“It would change our democracy in terms of the kinds of issues that are represented, in terms of public policy … I believe it would fundamentally change what our civic apparatus looks like. In other words, we could focus on educating voters instead of ensuring that they weren't discriminated against and it would change the kind of people and number of people willing to run for office.”

“We can do all these policy changes, and we should. But we also need a norm change. ... And we have shown in this country that massive norm changes can take place. It used to be that everyone smoked and no one cared, and no one buckled their children in seatbelts. … So how do we make norm shifts? Well you need norm entrepreneurs; you need conscious policies; it needs to be bottom-up, not just top down; you need a groundswell of activity. And I think what we need in this voting area is civic culture and a norm shift and a commitment to what it takes to change the way we think about voting.”

“Fundamentally, what I like to see is voting not seen as your grandmother's civic responsibility. ... We've got to recast voting. Voting is not something you do because you have to, it's something you do because certainly it's a responsibility, but it is also a form of protest activity. It's a form of disruptive activity. It's a way of upending the civic order.”