Leading by Example: Omar Yanar MPP 2010 is building a school that will take kids from hopelessness to college | Harvard Kennedy School
Skip to main content 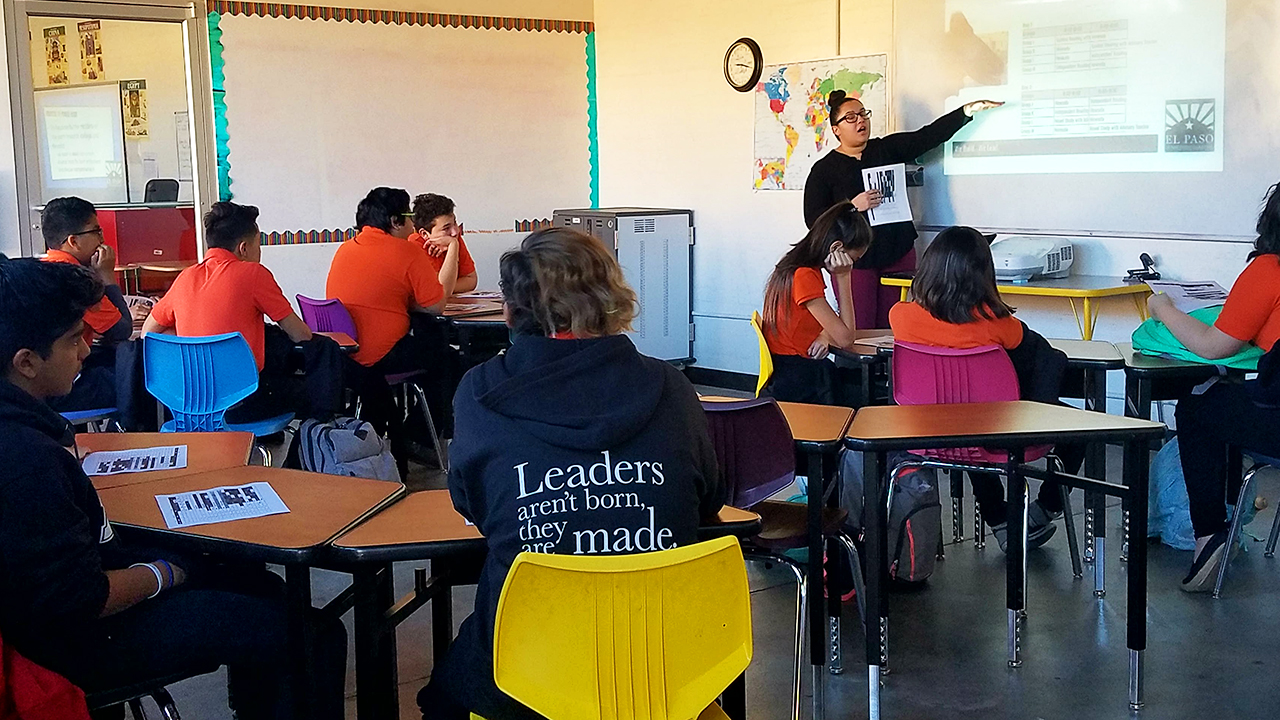 “When some teachers say, ‘Go home and do your homework,’ they may not understand what work our students have at home,” Omar Yanar MPP 2010 explains. “Some students wonder if the electricity will be on. Some wonder if an alcoholic relative will be crashing on their bed. Others enter an empty home because mom is working three jobs to keep the family afloat. This is the reality for many students. As educators, we need to ask what more schools can do to ensure these children succeed.”

Yanar observes that we have a national problem: Schools are not fully addressing the needs of low-income minority students. To fix this problem, he believes schools must treat students’ racial and socioeconomic status as assets rather than deficits, something he feels that the public school system does not always do.

Yanar is the founder and CEO of El Paso Leadership Academy (EPLA), a public charter school for sixth-to-eighth graders in El Paso, Texas. “Ninety-two percent of our kids are below the federal poverty line and 98 percent are Latino. Many are immigrants, given our proximity to the border,” Yanar says. “Look down our street and Mexico is within eyesight.”

Born and raised in El Paso—and Latino like the majority of his pupils—Yanar is a social entrepreneur on a mission. “Students will make the decision to attend college in seventh grade,” he says. “That decision is largely based on reading level, but their success depends on how socially and emotionally prepared they are.” Students who are significantly behind in their reading when they enter sixth grade—which the majority of EPLA’s students are—have a higher statistical likelihood of being incarcerated than attending college. Yanar seeks to reverse this trend. “What drives my passion is ensuring low-income Latino students have the same shot at success as their middle- and high-income counterparts,” he says.

EPLA opened its doors to students in 2014, but Yanar developed the idea of creating a tuition-free school five years earlier at Harvard Kennedy School. At HKS, Yanar met Marshall Ganz, Rita E. Hauser Senior Lecturer in Leadership, Organizing, and Civil Society, who inspired him to serve his home community through grassroots work in education. Eager to learn more, Yanar took Ganz’s courses on public narratives and organizing. “Marshall Ganz influenced the way I think about leadership and the model of leadership I developed for the school,” Yanar reflects. Through Ronald Ferguson, adjunct lecturer in public policy and faculty chair of Harvard’s Achievement Gap Initiative, Yanar also learned about school culture, focusing his Policy Analysis Exercise on this topic.

Inspired by his professors, Yanar developed what would become EPLA’s core values: collaboration, responsibility, smarts, humility, and hunger. His culturally responsive curriculum encourages well-rounded leadership: “Our students learn to view their race or background as an asset rather than a deficit. We empower them with a curriculum that connects with their culture.”

Yanar’s plans began to take shape in earnest when he cross-registered for a class at Harvard Graduate School of Education with senior lecturer Katherine Merseth, an expert on charter schools. Combining the lessons he learned at HGSE and HKS, Yanar began what would become his 288-page charter, the school’s foundational document. Yanar also had the good luck to meet Andrew Benitez, a fellow El Pasoan and Harvard College student who was equally passionate about education, at a Latino get-together at the John F. Kennedy Jr. Forum. Benitez co-founded EPLA with Yanar and is now the school’s principal.

The odds of starting EPLA were not good. Not only did Yanar have to refine his charter and register as a nonprofit organization, but he faced the lengthy process of applying with the Texas Education Agency, which grants charter school status. In 2013, EPLA was one of only three successful applicants from an initial pool of more than 80. The hard work continued after Yanar set up the school, aided by a charter school start-up grant and private donations and loans. Yanar recalls the dozens of jobs he took on at the beginning, including mopping the floors occasionally. In addition to building his model of leadership and his curriculum, Yanar directed day-to-day operations at first. He relied on the skills he learned at HKS for these tasks: “Negotiation skills, regression analysis, and ethics—I studied all of these at the Kennedy School and use them now.”

Yanar is not only interested in teaching leadership skills, but he hopes to serve as a model of leadership by example. “I myself am in a statistically minute group of people,” he explains. “I say this not as a point of pride but as a point of concern. I am one of only a few Latino charter school founders or CEOs in the country. But by serving as CEO, I can show our kids that it is possible. They can and must become CEOs too.” Even now, Yanar is seeing results as his first students enter high school and are excelling. “We have turned these kids’ lives around,” Yanar says. “They are exemplars in our community.” He is proud of the fact that the question many of them face now is not whether they will go to college, but where.

A Fierce Faith: Agnes Igoye MC/MPA 2017 is the loud, unwavering voice of the victims of trafficking