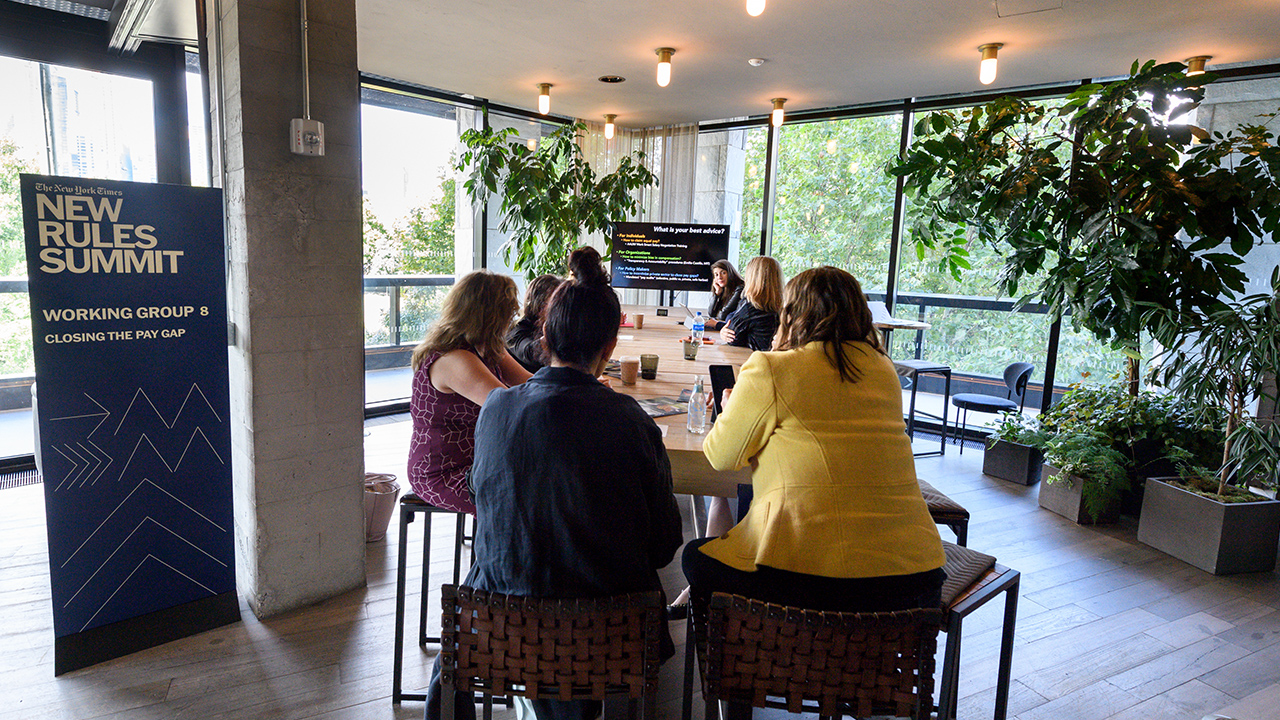 Bohnet and Bowles share their reflections on the “New Rules Summit: Women, Leadership and a Playbook for Change.”

On September 26–27, The New York Times convened leaders and luminaries from across the public, private, and nonprofit sectors for a conference on gender and the workplace. The “New Rules Summit: Women, Leadership and a Playbook for Change,” ran the gamut from discussions with CEOs on the challenges that women leaders face to Congressional candidates sharing their stories about running for office to Pulitzer Prize-winning journalists discussing sexism and harassment. Harvard Kennedy School’s Iris Bohnet, academic dean and Albert Pratt Professor of Business and Government, and Hannah Riley Bowles, Roy E. Larsen Senior Lecturer in Public Policy and Management—both experts on gender and leadership—led working groups for conference participants to formulate steps to create more inclusive work environments. Bohnet and Bowles, co-directors of the Women and Public Policy Program, reflected on the summit and what they see as the next steps for improving gender equity in the workplace.

Bohnet: The summit took place at a special moment in time, during the Blasey Ford-Kavanaugh hearings in Washington. Emotions ran high—and we all were running back and forth between the large screen in the foyer and the conference hall. New York Times reporters updated the audience and helped us interpret what was going on. It was a bit surreal to lead a workshop on our research on how to debias the workplace under these circumstances. For most of the attendees, what was going on in Washington was very personal—and we needed time to share, reflect, and learn from each other.

Bowles: I agree that the Blasey Ford-Kavanaugh hearings were a stirring backdrop for a conference subtitled “Women, Leadership, and a Playbook for Change.” With that backdrop, I found particularly compelling the conversation on how to be a male ally. Wade Davis, a former NFL Player and now a diversity and inclusion consultant, talked about the idea of allies being on a “one-day contract.” By this he meant that supporting one another is an everyday responsibility. We can’t let people down one day with the excuse that we’ve been good in the past. It also gives us an opportunity to do better every day.

Jamie Dimon, the chairman and CEO of JPMorgan Chase & Co., also talked about leaders’ responsibility for making everyone feel respected and included. He told a great story about a female executive pointing out how male executives all greet each other and then cluster together. He said he now makes a point of telling his managers that they may have their own friends, but they are everyone’s leader and have to show it every day and in every interaction.

The most inspiring panel for me was with two women who have been running for U.S. Congress this year: Pearl Kim and Rashida Tlaib. Kim is a first-generation Korean-American with a path-breaking record as a special victims prosecutor. She is running as a Republican to represent Pennsylvania’s 5th Congressional District. Tlaib is Palestinian-American and the first Muslim woman to serve in the Michigan Legislature. She just won her Democratic primary and will now run unopposed in November to represent Michigan’s 13th Congressional District. It reminded me of all of the fabulous Harvard students who have participated in “From Harvard Square to the Oval Office,” a program at the HKS Women and Public Policy Program that trains nontraditional candidates to run for and serve in public office.

Q: What did you feel were the most important ideas, challenges, and successes discussed at the summit?

Bohnet: It was not one particular idea that stood out for me but the combination of individual and institutional approaches. Clearly, we need both, the individual and the institutional, to level the playing field. Courageous women and men talked about their journeys, fighting for and supporting women’s advancement, and  the researchers, including Hannah and me, shared how these insights can be generalized and scaled. In my remarks, I focused a lot on what organizations can do—increase pay transparency, debias hiring and promotion processes, and foster inclusive cultures—building on behavioral science. I shared that even good people get it wrong sometimes, and we need to build systems that make it easier for all of us to get it right.

Bowles: Again, with the Blasey Ford-Kavanaugh hearings in the background and folks like Megan Twohey at the microphone—she is one of the journalists who won a Pulitzer this year for exposing sexual harassment in the workplace—one had a sense this is a historic turning point in our national consciousness with regard to questions of gender equity.

Q: What do you see as the next steps to foster a new era for women’s leadership in the workplace?

Bohnet: The Women and Public Policy Program at Harvard Kennedy School is currently building a platform to share “best evidence” (instead of “best practice”) on what works to level the playing field for men and women in the workplace. Our aim is to help organizations build their diversity and inclusion efforts using data rather than copying what is fashionable in their industry. For example, there is little evidence suggesting that diversity training does any good—but it still is a popular instrument in many organizations. Instead of trying to debias mindsets, the evidence suggests that we should focus on debiasing systems.

Bowles: I would name three things. First, women running for office in record numbers is tremendously exciting for the health of our democracy and for promoting gender equity. Second, I believe there is a growing awareness that women’s leadership advancement is not a “women’s issue”—gender equity is a collective challenge that fundamentally involves men and intersects directly with other forms of social justice. Third, this is a historic moment when people are leaning in and looking for solutions. We should be bringing our best research and ideas to bear to help business and government leaders develop evidence-based policies for promoting gender equity.