Let’s be human: Malala Yousafzai on unlocking the potential of all girls and boys, the unexpected hopefulness of refugees, and our shared humanity | Harvard Kennedy School
Skip to main content 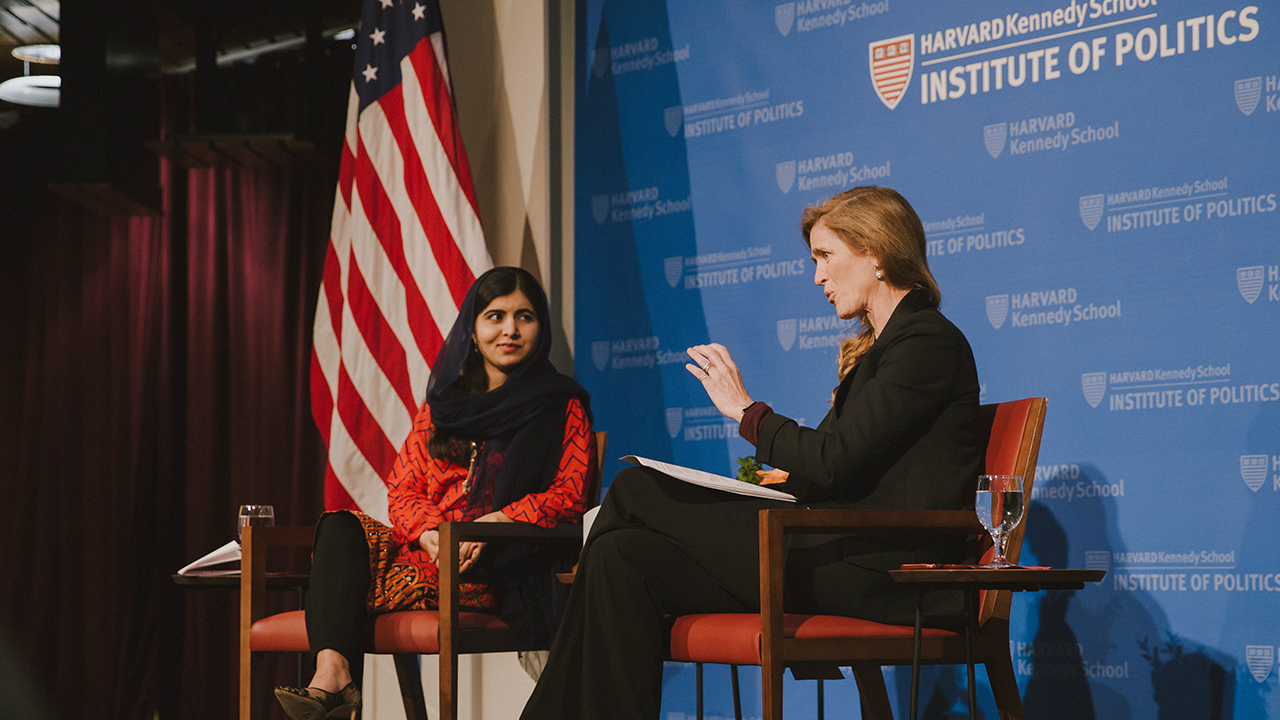 Yousafzai, at Harvard Kennedy School to receive the Gleitsman Award, spoke about being a student, the importance of her relationship with father, and her advocacy for education and refugees.

As an 11-year-old, Malala Yousafzai began writing an anonymous blog for the BBC on life under the Taliban in Pakistan’s Swat Valley. She was almost killed by a Taliban gunman when she was 15 because of her increasing visibility as an advocate for girls’ education. Yousafzai recovered from her wounds and, when she was 16, addressed the United Nations on the importance of access to education. When she was 17, she became the youngest-ever winner of the Nobel Peace Prize. On Thursday (December 6), Yousafzai (commonly known simply as Malala)—now 21—was at Harvard Kennedy School to receive the 2018 Gleitsman Activist Award and speak at the John F. Kennedy Jr. Forum. Following a conversation with Samantha Power, Anna Lindh Professor of the Practice of Global Leadership and Public Policy and former U.S. ambassador to the United Nations, Yousafzai took questions from the audience, including a 10-year-old girl eager to know about her source of strength, a newly-elected Congresswoman curious to know what men’s role should be in advancing feminism, and a Pakistani teacher—now studying at Harvard—who was inspired in her choice of career by Yousafzai .

“Sometimes you see so much disappointment and despair and hopelessness in the media and among people who have so much. And then you go to a refugee camp and you feel like they should be the most depressed people in the world because they have nothing—they do not have shelter, they have no electricity, they have no quality education. Then you talk to them and they are the most hopeful people. All the girls I have met in the refugee camps, they are so positive about their future; they believe that one day they will be able to go back to their country. They have—all of them—have dreams.”

“We should not assume that it is these people's fault that they're refugees—it's never their fault. And we should try to understand how would we want other people to welcome us when it happens to us ... I think we need to look at it from the human eye and be more welcoming and consider them as our brothers and sisters. Let's be human and let's understand that we are all living on this one planet Earth.”

On investing in women

“We need more research and more work in terms of how investing in women can help us grow economies. One study that we did recently with the World Bank, which was also supported by Apple, tells us that if we give complete education to girls, it can add up to $30 trillion to the global economy.”

On the value of education

“If we do not treat them equally, if we do not appreciate and recognize their culture and their traditions, then they will stand up for their rights and I think it's true for any country. You have to recognize every community that is living there—their culture, their language, their religious beliefs, everything that they have ... you have to appreciate it and recognize it because that's what makes Pakistan. If you ignore Pashtuns, if you ignore Baluchis, if you ignore other populations, then Pakistan just remains as land with no people.”

A Conversation with Malala Yousafzai and Samantha Power

Q&A with Michela Carlana: Studying the impacts of gender on education