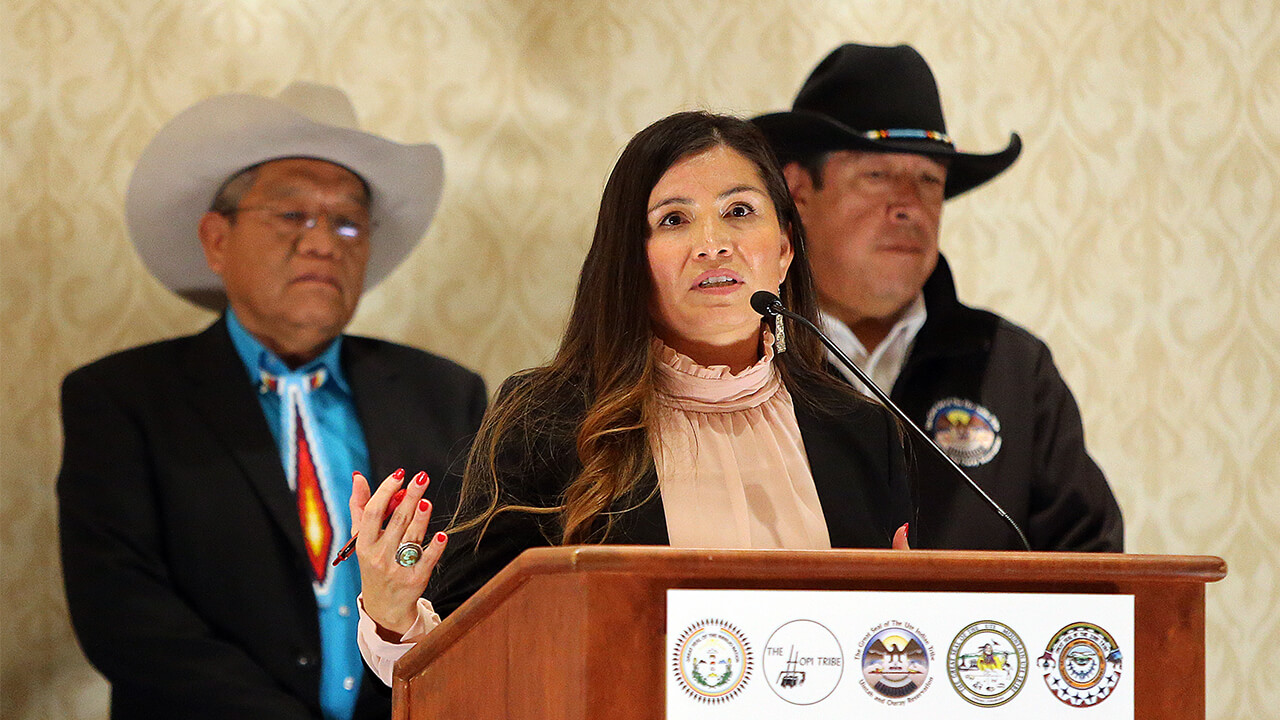 ETHEL BRANCH MPP/JD 2008 grew up just outside the small town of Winslow, Arizona. But in many ways, her childhood experience was a million miles from there.

“I noticed really early on in my childhood that we didn’t have basic amenities,” says Branch, whose family home on a Navajo reservation lacked running water and electricity when she was young, and even still today. “I didn’t perceive a difference between myself and the people who lived off reservation, but there was definitely a difference in the services available to us. And I started asking, Why?”

Simply getting off the reservation could be difficult—the nearest neighbor was miles from her parents’ ranch. But after graduating from Winslow High School, she made a much greater leap: coming to Harvard College for her undergraduate studies.

“I almost felt like I was an international student going to a totally different world,” says Branch of her transition to Harvard. “I couldn’t call my parents because they didn’t have a phone. There were very few other Native American students, and some of them had grown up in cities, so the divide between our experiences was still huge.”

Never one to back down from a challenge, Branch worked hard to hone her academic skills, graduating in 2001 with a degree in history. Even as an undergraduate, she was interested in law and policy, and how each of those related to her own experience and the issues facing her community.

“I took some classes with Joe Kalt through the Harvard Project on American Indian Economic Development,” Branch says. “I always had so many questions: Why is there no development in Indian country? Why are our economies stagnant? I was the only person from my community at Harvard, but I wanted to make that a normal thing. I didn’t want to be the only one.” (Kalt is now a codirector of the Harvard Project on American Indian Economic Development and the Ford Foundation Professor (Emeritus) of International Political Economy at HKS.)

After graduation, Branch headed back home to Arizona to work as the headmistress of a local public charter high school, teaching history and language arts courses. She loved the work, but quickly realized the limitations faced by many of her students whose parents were—in the best case—working multiple minimum-wage jobs to stay afloat financially. Some of her students had parents or guardians who were forced to take better-paying jobs in other cities, rendering them solvent but often absent. Alcoholism and unemployment were common. Whatever the reason, many of her students’ parents were frequently unavailable to deal with disciplinary problems, illness, or other issues that arose for their children. Branch knew that larger-scale change was needed to address the underlying lack of employment and opportunity.

“The real barrier to economic development in Native communities is the lack of human capital,” Branch says. “I saw this firsthand: we don’t have people returning. They go away to college and then they never come back. Or they’re not even getting past high school graduation. After I came back from Harvard, I wondered, What happened to my high school classmates from the reservation? I wanted to do something about it.”

“I began to realize how many barriers there are to development on the Navajo Nation,” Branch says. “And so many of them are ridiculous! There are laws and policies, and you have to get tribal approval for many things, which takes forever. Then documents would get ‘lost’ in Washington. I wanted to know, How do you eliminate those barriers and make it easier, How do you make the Nation more business-friendly? How do you make it so people aren’t scared away by the cost and the time it takes to invest here?”

Branch applied for the joint program at HKS and Harvard Law School, knowing she would need both the law and the policy piece. “It was hard to come back to Boston,” she admits. “My dad was really ill, and he ended up passing away while I was in law school. I definitely relished the academic challenge, and the ways in which I was exposed to information and resources I hadn’t had access to before. For me it was always about, How do I make Harvard relevant to home? How do I bring these resources back to the Navajo community? There was a lot of independent study. I would always try to reorient my papers back to home.”

One of Branch’s projects during her time at HKS was a paper on Navajo governmental reform, addressing the disconnect between tribal culture and the Nation’s current system of government. “It’s a real challenge,” she says, explaining that the present Navajo Nation government “is not a cultural match. It’s a very American, federal-style model: we have three branches of government, a unicameral legislature, and 12 different divisions (similar to federal agencies). It’s a very American federal type of model, and it is not loved by the Navajo people. They don’t really see it as their own.”

After practicing law in the Pacific Northwest for several years, with a brief stint in Washington, D.C., Branch returned again to her roots. Since 2015, she has served as attorney general of the Navajo Nation. With a staff of 88, she oversees the legal affairs of the Nation, whose sovereign territory stretches across parts of three states (Arizona, Utah, and New Mexico—and with a land claim and free holdings in Colorado) and comprises various departments and offices.

As attorney general, Branch recognizes both the immediate necessity of the work she does and the irony of being a Native person whose job includes working within the current system of government. “The Navajo people, at what you would call the grassroots level, are against bureaucracy,” she says. “They feel like it doesn’t recognize their humanity.”

On some level, she admits, that attitude makes sense: for people who need basic services or want to solve problems for themselves and their communities, an office far from their homes can seem inaccessible or simply out of touch. “Even my mom gets frustrated with me about our water service policies,” Branch says. “She’ll say, ‘It’s not your job to enforce policies—it’s your job to help us!’” Although Branch believes there’s a way to do both, it can be an uphill battle.

Branch's work as attorney general encompasses many facets of Navajo life: public safety, utility services such as water and electricity, voting rights legislation, social and emergency services. “I feel like the way I connect this government to our people is by being out in the community more than my predecessors,” she says. “I’ve tackled things that a lot of other attorney generals wouldn’t have bothered to tackle.”

A large part of Branch’s work entails suing entities such as the U.S. government and various corporations, calling them to account for wrongful business practices or unfair actions that violate the rights of Navajo people or the sovereignty of the Nation. For example, Branch's department is suing the U.S. Environmental Protection Agency and other parties for their part in contaminating Navajo waters in the Gold King Mine spill. “That impacted our farmers in the San Juan River basin tremendously and on an individual basis,” Branch says. “This is a strong farming community where people were able to make a living from farming. They were using lots of organic methods, and heirloom strains of fruits and vegetables as well. To take away that source of empowerment to families was devastating to the community there and to the larger Navajo community.” The attorney general's office is also suing Wells Fargo for its targeting of Navajo consumers, especially elderly people and female business owners, in unfair and unethical business practices. The list of issues goes on: voting rights and gerrymandering, water rights disputes, tribal jurisdiction over trust land leased to public school districts, to name a few.

“It’s demanding in a million different ways, and that’s what makes it so fun and fulfilling,” Branch says. “I always loved a challenge: that’s what got me to Harvard for college, and got me back there for graduate studies. And I work with a wonderful team.”

One constant challenge for Branch and her colleagues is staffing: many departments are consistently understaffed, and historically, they have struggled to share resources and communicate with one another. In 2017, Branch reinstituted annual public safety summits followed by monthly meetings with officials from agencies across the Nation working on different aspects of public safety. “It’s been huge,” she says of the summits. “We included behavioral health, social services, fire departments, emergency medical services. We brought all the partners together. None of us have adequate staffing—that’s the reality. So how do we focus our resources? How do we stop blaming one another and begin to work together?”

Public safety is a critical issue for the Navajo Nation, which has high rates of homicide, theft, and domestic violence. While that challenge is important to address on its own, Branch says, it’s also crucial to the future of economic development. “Our own people won’t want to come back and live and work here if they don’t feel like their kids are going to be safe,” she says. “And developers won’t want to invest in communities that aren’t safe, or where their property or investments won't be protected.”

Branch can reel off a long list of changes that would improve public safety on the Nation. For starters, a comprehensive 911 system would make a difference. “Sixty percent of the Nation doesn’t have two-way radio access,” she explains. “Forty percent of it doesn’t have cell phone access. This makes it difficult for our officers to call for backup, or for our people to call for help when they need it.” She dreams about a fully-functional two-way radio system, a non-911 crisis hotline staffed by social services personnel, and a full complement of judges, prosecutors, and public defenders across the Nation. Meanwhile, she’s trying to standardize local rules and procedures across the Nation's 12 judicial districts, to help streamline the public safety system and reduce delays.

Politics within the Nation can be complicated, but Branch keeps her focus firmly on one thing: “I’m here for the Navajo people,” she says. “Hearing from everyday people that they’re grateful for the work I do makes it all worth it. And I work with a wonderful team, many of whom are Navajos who grew up on the Nation. Our staff are very committed. They are aware that every additional minute they put in on the job is meaningful to someone’s life.”

A Fierce Faith: Agnes Igoye MC/MPA 2017 is the loud, unwavering voice of the victims of trafficking