Samantha Power and Salil Shetty on why human rights matter in the age of Facebook, a rising China, and democratic uncertainty | Harvard Kennedy School
Skip to main content 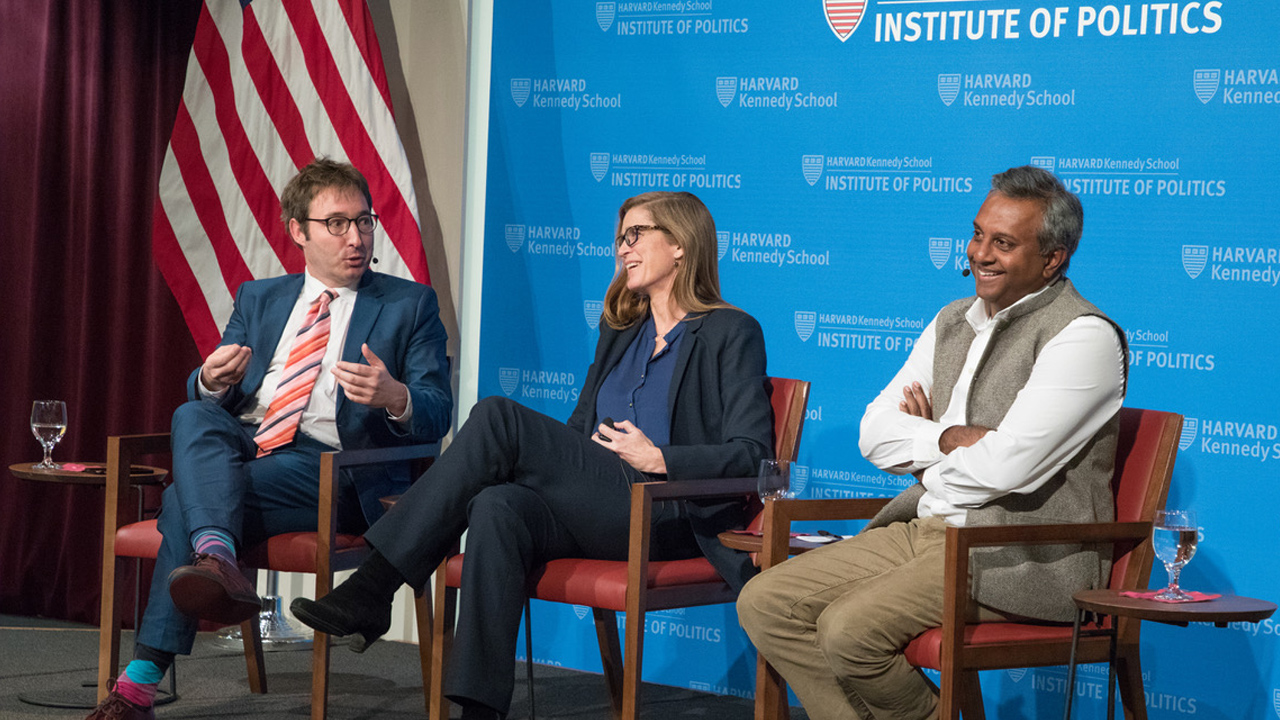 The former ambassador to the U.N. sits down with the former leader of Amnesty International to make the case for human rights.

Now, perhaps more than ever before, is the time to fight for human rights, according to Samantha Power, Anna Lindh Professor of the Practice of Global Leadership and Public Policy at Harvard Kennedy School and former U.S. ambassador to the United Nations, who spoke on the topic at a recent John F. Kennedy Jr. Forum. Joining Ambassador Power on stage for the talk, titled “Why Human Rights Matter in Today’s World,” was Salil Shetty, senior fellow at the Carr Center for Human Rights Policy and former secretary general of Amnesty International. The event came ahead of the 70th anniversary of the Universal Declaration of Human Rights, the influential document adopted by the United Nations in 1948 and that has since served as a cornerstone of human rights policy worldwide.

To commemorate the anniversary, Power and Shetty reflected on the progress that has been made since the Universal Declaration was signed. However, Power underscored the need to prioritize human rights during an age when democracy is under fire, technologies are growing more powerful and dangerous in the ways in which they are used to target vulnerable populations and infiltrate politics, and China, a country where critics are silenced and books are censored, has a stronghold on the world economy.

Speaking on the influence of technology giants such as Facebook, Power said, “These companies of course need to prioritize contributing to the health of democracy as a goal right alongside making yet more money. The leadership of well-rounded, tech-savvy, and civic-minded young people who are literate and can distinguish fact from fiction is of course going to be critical to reining in some of the negative effects of these new technologies at home.”

And with regard to China’s human rights aggressions, Power told the crowd, “The U.S. cannot continue to retreat, as it has done of late. U.S. leadership is essential. We—a democracy, and all democracies—have a stake in standing up for and supporting the values we hold dear. Those values enshrined 70 years ago in the Universal Declaration. If we don’t, they will come under even greater threat than anything we have seen. Pushing for human rights is not an obstacle to be avoided or a distraction from our core interests, as an American president has recently maintained. What happens to people in other countries impacts us all.”

Power went on to encourage the students in the audience to “shrink the change” and not be afraid to engage in seemingly small ways to make a difference, such as tutoring refugees. “Do not be shy about choosing one battle and making it yours,” Power said. “A narrow cause with a modest result is more than okay. It is what is needed.” After her talk, Power discussed with Shetty the gridlock impeding the U.N. Security Council’s efforts to enforce world peace and the future of U.S.-Saudi relations amidst the threat of sanctions and the ongoing war in Yemen.