Could one of these big economic ideas solve economic inequality in America? | Harvard Kennedy School
Skip to main content 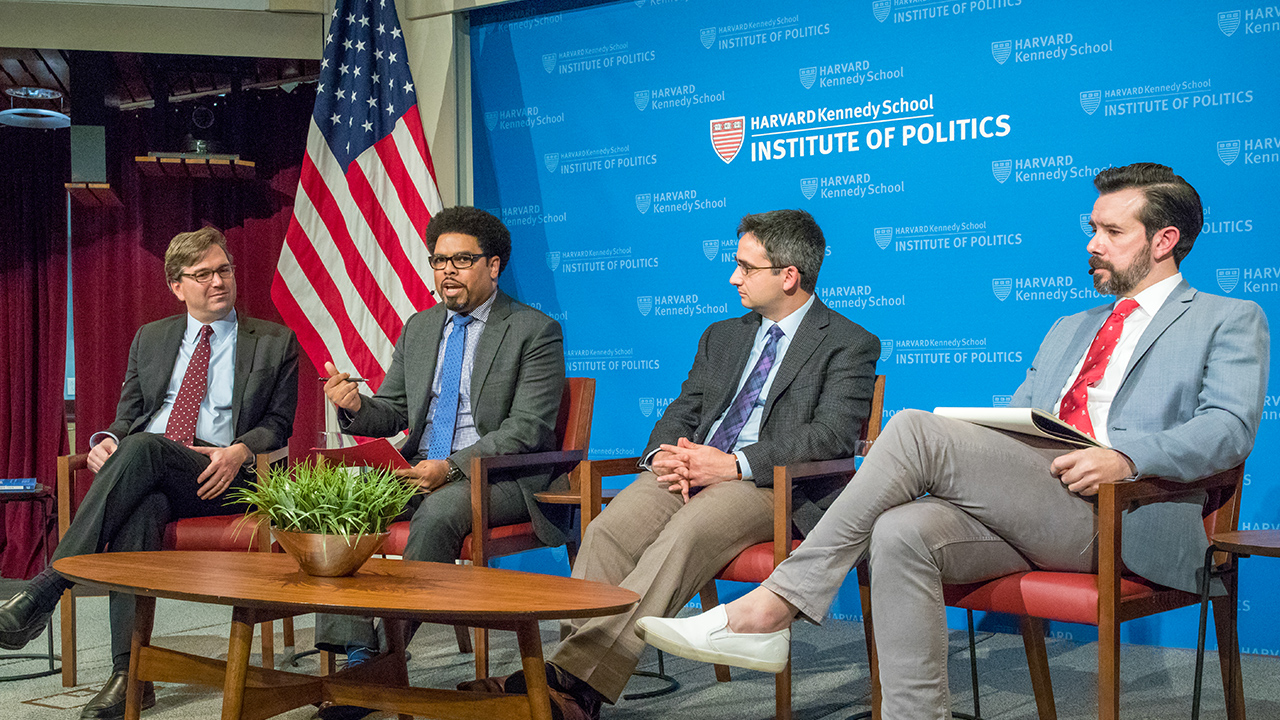 Could one of these big economic ideas solve economic inequality in America?

Four big thinkers share what they argue could be the “next big economic idea.”

“In universities, often we’re really good at finding the problems in everything, and that leads us to have a harder time thinking outside the box about some of the bigger ways you could have change.” That’s how Jason Furman, professor of the practice of economic policy at Harvard Kennedy School, opened a John F. Kennedy Forum event dedicated to discussion of the “next big economic idea.” Four provocative ideas, pitched by four important thinkers.

Annie Lowrey, contributing editor at The Atlantic Magazine and author of Give People Money, introduced what she herself described as a simple, but perhaps kind of crazy, big idea: giving everyone the same universal basic income. “In an economy as rich as the United States’, you do just want to have a universal guarantee for people,” she argued. A universal, government-provided, basic income would remove the hoops that low-income families often have to jump through in order to receive financial assistance, and provide them with the social insurance and sense of agency they need to make smart financial decisions, whether it’s leaving a bad housing situation or seeking entrepreneurship opportunities, Lowrey argued. “If you just give people cash, they tend to spend it pretty well,” she explained.

Darrick Hamilton, professor of economics and urban policy at The New School, did not tout his big economic idea as new or novel: guaranteed employment was in fact proposed by President Franklin D. Roosevelt in his second bill of rights. However, with the rise of what he described as “the whimsical notion of trickle-down economics,” Hamilton said, “the onus of social mobility has shifted onto the individual.” A federal job guarantee would directly fight and ultimately eliminate involuntary unemployment by creating competitive alternatives to low-wage private sector jobs in fields such as education, supportive housing, arts and culture, and sustainability. Hamilton stressed, “Everyone should have the right to work with dignity of at-least decent wages, benefits, and good working conditions.”

“Work is what matters,” argued Oren Cass, a senior fellow at the Manhattan Institute. Work enables people to support their families and communities and as a result often gives meaning to life. Yet this belief sharply diverges from the consumer welfare paradigm that serves as the foundation for U.S. economic policy today. For Cass, redistributing some of the money spent on welfare programs that disregard or even discourage employment to a policy that promotes jobs that people can use to support their families is the key to prosperity. A wage subsidy program would put additional money from the government into every low-wage worker’s paycheck, rather than take money out of every paycheck. Compared to the existing child tax credit in America, the wage subsidy would focus on workers and could be used to advertise jobs and encourage workers to take those jobs.

Idea 4: Deregulation of Local Land Use

Will Wilkinson, vice president for research at the Niskanen Center, opened with a statement that rings true for many renters and homeowners in big cities: “Most of us who live in a big city, like Boston or New York or Los Angeles or Chicago, are paying way too much.” If workers cannot afford to live in the places where they would be most productive, there is a ripple effect on the entire economy. Wilkinson argued that one of the main reasons for the affordable housing crisis in America is increasingly stringent local land-use restrictions. Wilkinson’s big idea, is to deregulate local land-use through federal action, such as legislating against excessive zoning or attaching provisions to relevant federal funding for state infrastructure projects. Compared to the other policy ideas, “This doesn’t really cost anything; it just releases latent productivity,” Wilkinson argued.

Following the pitches, the speakers and audience members engaged in a discussion on the merits of the four policy ideas, as well as the challenges they present. How do we pay for a universal basic income? Would a universal basic income erode the value of work? While some of these questions remained unanswered, there is clearly a need for further dialogue—and action—around these compelling policy ideas.