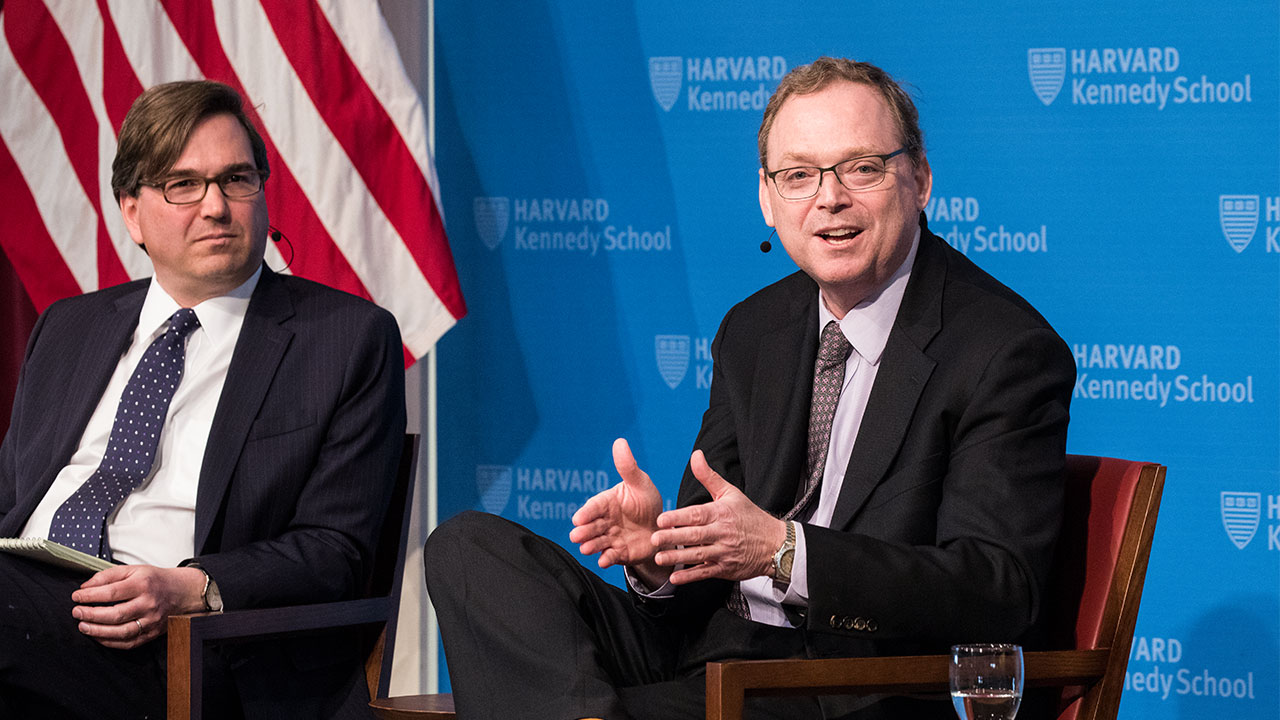 Kevin Hassett, chair of the White House Council of Economic Advisers, offers a vigorous defense of the president’s economic policies.

The chair of the White House Council of Economic Advisers offered a vigorous defense of President Trump’s economic policies during an appearance on April 5 at the John F. Kennedy Jr. Forum. Kevin Hassett was interviewed by Jason Furman, professor of the practice of economic policy and a former chair of the White House Council, during the annual Malcolm H. Wiener Lecture on International Political Economy.

“The bottom line is that since we took office…everybody’s outlook for growth over the next couple of years has gone up a lot,” Hassett remarked, citing recent analyses by the National Association for Business Economics and other groups. “When the median economist now thinks that three percent [annual growth] is possible again, then to what extent do you think it’s fair to say that this Trump guy is onto something?”

The 2018 Malcolm H. Wiener Lecture on International Political Economy A Conversation with Kevin Hassett Chairman of the White House Council of Economic Advisers

Hassett credited the sweeping tax-cut bill signed into law by the president late last year with reviving the economy by slashing corporate taxes and attracting foreign investment, arguing that the impact was fast and significant.

“I think there is a mood change in America that is related to our policies,” Hassett said. “Right now we are in a world where we are going from a place where we were sure we would be stuck at two percent [annual growth] or worse…to a world where we wonder whether this three percent [growth]…that we are seeing can be sustained.”

When asked by Furman about how the administration treats the cost/benefit analysis of regulatory policy, Hassett took to the offense, claiming that while the administration eliminated large numbers of regulations last year, even more needs to be done to stimulate additional economic growth in the years ahead.

“Regulatory costs in the U.S. over the last decade were growing eight percent a year,” he said. “We have the example in the [White House] Economic Report that if we change our level of regulation to that of Germany…then we get an extra tenth of a percent of GDP growth per year…and if go all the way as reckless about regulation as the Netherlands…then you get two-tenths of a percent a year of growth.”

On trade policy, Hassett said that President Trump is focused on changing unfair global trade policies that have emerged since the disintegration of the Soviet Union. Those policies, he argued, were motivated by the United States’ desire to gain favor with countries that needed economic help from the West. But Hassett said the time for such asymmetric trade policies has come and gone.

“If every country on earth adopted U.S. trade practices, what do you think would happen to global GDP? And the answer is, it would go up a lot because there would be so much more trade,” he said.

When asked by Furman how the administration hopes to resolve the current tariff battle with China, Hassett responded that it won’t be resolved until China “enters the community of nations and begins operating like everybody else.”

“We should all hope that as China becomes the biggest economy, then it needs to act like a steward of the global economy, rather than a rogue.”

Looking forward, Hassett said he is “extremely optimistic” about the nation’s economy, particularly as policies enacted during the administration’s first year pay bigger and bigger dividends in the years ahead.

“I think we are in a unique time in economic history in that we’re very deep into a recovery, but the recovery was one that was so capital poor that capital’s contribution to productivity growth went negative,” he said. “And now we’ve fixed the broken corporate tax code that was telling the capital to all go away, and it’s all coming back and you can see it coming back, and capital spending is going up.”

The Forum event was co-sponsored by the Institute of Politics and the Mossavar-Rahmani Center for Business and Government.