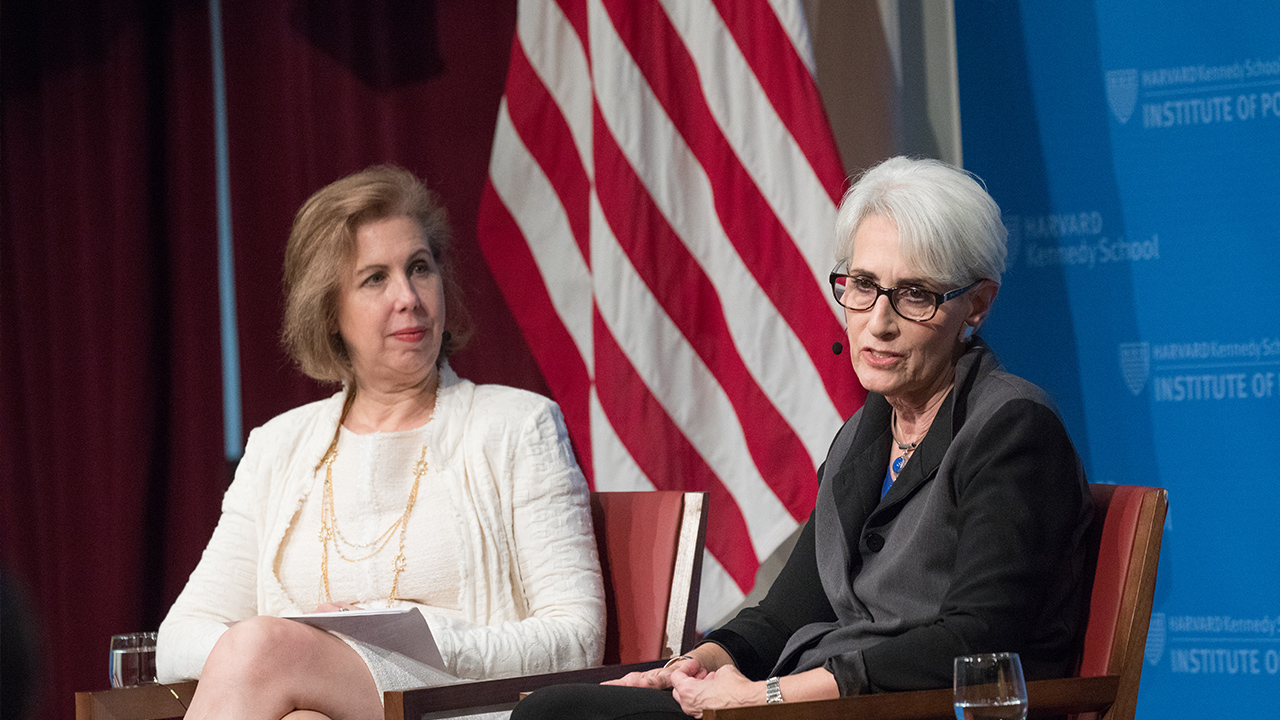 Authentic leadership in a time of gladiatorial combat

During the conversation at the John F. Kennedy Jr. Forum, Gibbs asked Sherman—whose accomplishments include serving as the lead negotiator with Iran in the talks ending in the 2015 Iran nuclear deal—why she decided to come to the Kennedy School. “It wasn't something I went looking for,” Sherman said. “Actually, Graham Allison suggested that I consider it, and I said okay because one thing I’ve learned in life is that you should never say no. You should be open to whatever opportunities come your way. Some of the best things that have happened to me in my life were completely unexpected.”

Sherman, who will take on her role of director of the Center for Public Leadership and a professor of the practice of public leadership in January, shared her thoughts on leadership with the Forum audience. “I think it’s incumbent on all of us to spend some time thinking about the nature of leadership—what we want; what we expect of our leaders; what makes a good leader—and try to lift up all of the people who are trying to do good things,” she said. With a nod to the title of her recently published book, “Not for the Faint of Heart: Lessons in Courage, Power, and Persistence,” Sherman made the point that leadership requires courage, determination, and authenticity. “Each of us is most powerful,” Sherman said, “when we are our authentic selves. If we try to be other than who we, are we are less powerful.”

Gibbs, citing the polarized political backdrop of the Senate’s confirmation of Brett Kavanaugh to the Supreme Court, asked, “Are you concerned, as we were reminded ... of what felt at times like gladiatorial combat, that even as the stakes and the importance are so high, that the obstacles are too?” Sherman observed that the “gladiatorial” arena of politics is nothing new, and spoke about how she helped prepare Anita Hill for her testimony before the Senate Judiciary Committee during the 1991 hearings to nominate Clarence Thomas to the Supreme Court. During the hearings, Hill testified that she had been sexually harassed by Thomas, who was ultimately confirmed to the court by a narrow majority. Sherman compared what happened in 1991 to Kavanaugh’s Supreme Court confirmation, saying, “It is the same narrative; it is the same script. On one level it depresses the hell out of me, but on the other hand it reminds me that the courage to take on these fights means there’s going be a lot of failure along the way. And if it’s the right thing to do, one has to keep fighting for it.”

Speaking up for what is right, Sherman argued, can take courage and doesn’t always come without sacrifice. As an example, she spoke about the courage of her father, who lost much of his residential real estate business when he took a vocal stance against segregation in 1960s Baltimore. Sherman also spoke about her own coming of age during the Vietnam War, and emphasized how important it is for people to speak up for their beliefs—whether through protest or through electoral participation. “I think it’s crucial that people's voices are heard,” Sherman said. “I certainly think the first thing we need to do is make sure everybody you know is registered to vote and they go vote on November 6.”

A generation with a creative purpose: Q&A with IOP Director Mark Gearan